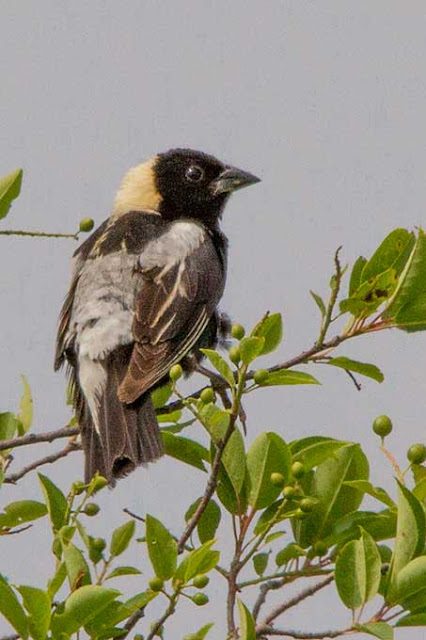 On Saturday, my husband and I were traveling along a dirt road when we chanced to see some bobolinks out in  hayfield. Then we noticed a male sitting atop a tree next to the road, on guard making sure his family was safe in it's hidden nest in the field. 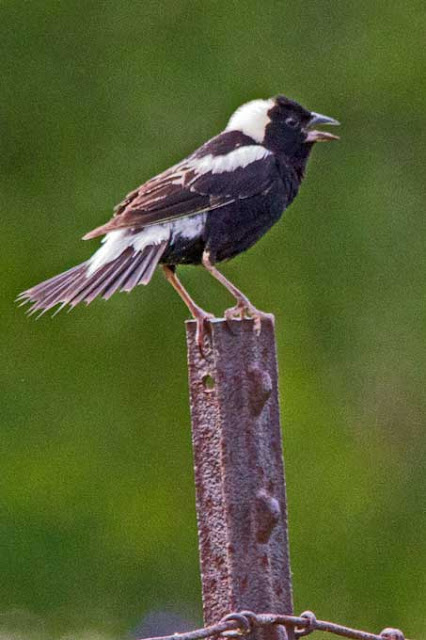 Male watching its nest area from a fence post

The male warned his family that someone with a camera was nearby, but he had nothing to fear from me as climbing the fence was not something I was about to do. 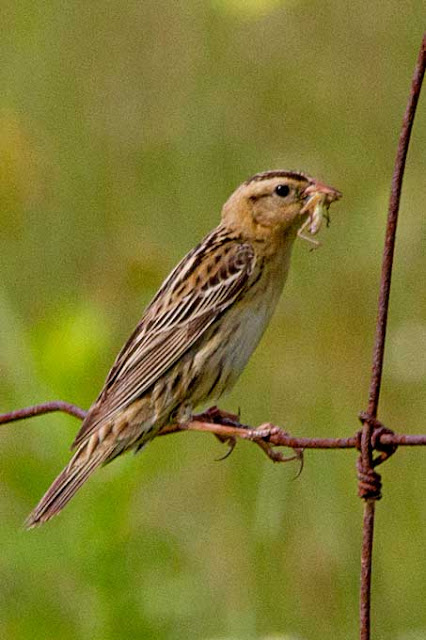 Female with a mouthful for the kids

A few minutes later, the female arrived with lunch for the kids. Or was it dinner?  Actually. when the babies are young, it's an all-day breakfast, I think. 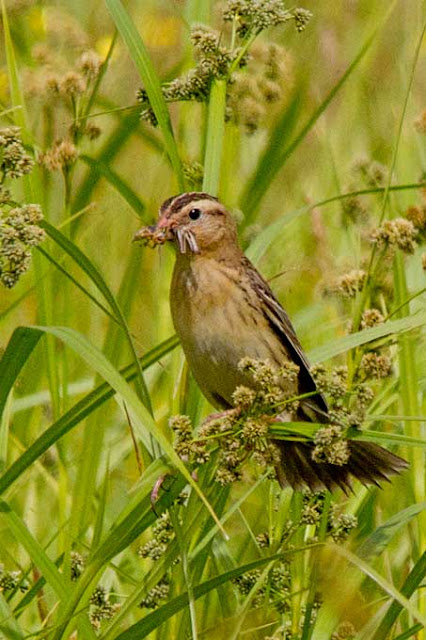 Female very close to her nest

It appeared the female didn't want to divulge where her nest was.
I am joining Stewart M's Wild Bird Wednesday HERE

Posted by EG CameraGirl at 5:50 AM

You have a great eye- nice captures!

You got some delightful, munchy shots of these bobolinks. Quite a name.

Your pictures are always fabulous! How patient you must be... :o)

Love this bird and would love to see it in the wild! Great captures!

I want to see a bobolink here in Nebraska -- but have not yet! Thank you for your awesome captures!

I've never heard of a Bobolink. How cute!

Hi Same as Jill, never heard of a Bobolink. I wonder how they got that name? Great shots. Thanks. Margaret

I'm sure I've never seen a bobolink. What wonderful markings they have!

There is another bird I have never seen before. I like the meals-to-go shots.

Great pics of the Bobolink family in spite of being spotted by the attentive male.

love them! haven't seen or heard them since leaving wisconsin 29 yrs ago!

You got some great photos of the bobolinks. They are such pretty birds, especially the male, and have a very cheerful singsong voice. We have a lot of them around here too.

i have heard bobolinks calling but never seen one, they look nothing like i would think they would.

Your photographs of these sweet little ones are really beautiful!

This is a great series of images. The bobolink is a bird I have yet to add to my life list and I look forward to that day.
Have a great week,
Denise
An English Girl Rambles

I seen these one time at our strip pits...I am sure they were probably just passing through. I have watched for them every year since.

Pretty little birds. I had never heard of them before!

I have never seen one and must admit that my mental image was quite different than this. Thanks for the education, EG!

So that is what they look like! I used to hear them in the fields, but I think there are too many houses for them, now...

These are wonderful shots.I usually don't get the males so the back is showing.

Great photos - the male has such beautiful colors and patterns.

Nice sighting and photos! I keep missing the Bobolinks here maybe I will see on its way back thru. Great post.

Very cool shots. We don't have Bobolinks around here. Sigh. The female looks like a female black-headed Grosbeak. Maybe they are related?? MB

Well, I'm just loving their name - the male has such a striking pattern on its head!

what fun coloring on the little chap. and the missus is cute too.

Nice photos of these birds in their native surroundings, EG.

He has a funny name.

Great photos, I'm hoping to get some photos of Bobolinks when I visit Ontario this summer!

A busy day for the bobolinks family, very well documented!

Beautiful pictures of this bird, nice to see the food in the mouth, for the young birds.
This bird is not in Netherlands.
Regards, Irma

I don't think we have Bobolinks here. Nice pictures of the parents cooperating to see all goes well in the nest.

You really do capture the most gorgeous little birds around your neck of the woods, mine always seem to be so big compared. I know there are little ones out there in my trees but they're just too darn fast!

What a great series of pictures. I especially love the last shot of the attentive mother bird with the babies' lunch. It's wonderful!

I'll be in Illinois for only one more week and have only seen Bobolink fly-overs. You caught them up close and personal! I'm setting out after them tomorrow if the rain goes away.

Love to see them munching!

Beautiful captures! I spent a lot of time in my pasture this spring playing hide-n-seek with the bobolinks.

Wonderful series, especially the female with food!
I saw my first Bobolinks this winter as they passed through central/west Florida during migration.
Thank you for sharing!