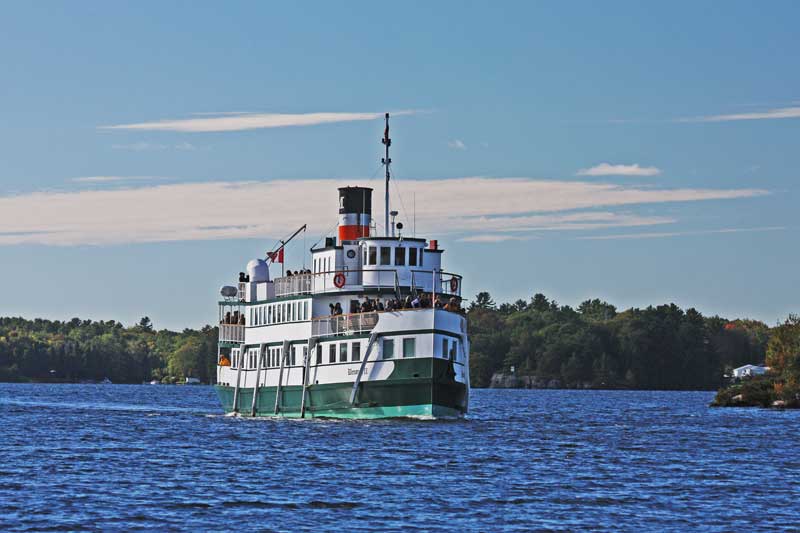 Wenonah II, Gravenhurst, Ontario
Yesterday was a beautiful day, the last weekend of the summer of 2010, so my husband and I drove north to Gravenhurst on Lake Muskoka to enjoy this beautiful time of year. While at the Muskoka Wharf eating drop-dead delicious Kawartha ice cream, I was lucky enough to capture the Wenonah II just before it docked.

The Wenonah II takes up to 200 tourists on various cruises in this area. 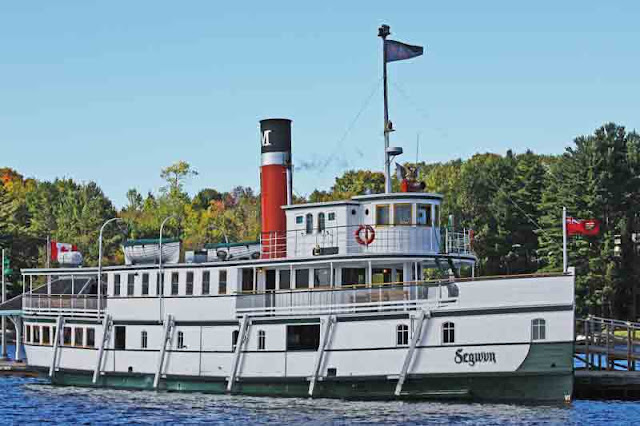 RMS (Royal Mail Ship) Segwun, North America's oldest operating steamship
RMS Segwun was already at the dock, smoke still emitting from her stack. Smaller than the Wenonah II (she can carry up to 99 passengers), she was built in 1887, originally as a side-wheel paddle steamer called Nippissing II. But in 1925 it was rebuilt and renamed Seqwun, which means "Springtime" in the language of the Objibwa.

Visit My World Tuesday  HERE to see tons of photos from around the world.
Posted by EG CameraGirl at 8:12 AM

I love these boat shots. And to thinks the smaller steamboat is still operating, at such an advanced age, even though refurbished. I am glad you got out to enjoy the day and take these wonderful pictures. MB

She's a lovely, historic boat, she is she is!

Those are beautiful boats and looks like the perfect day to be out.

Perfect shot of the boat in the first one, picture postcard perfect! I like them both. Looks like an ideal day for sure.

What a great boat for sightseeing!

Looks like a beautiful day for a scenic cruise.

Love the boat and what a lovely place! Would love to visit there and take a little cruise on the boat and enjoy some ice cream! Your photos are the next best thing to doing just that! Have a great week!

Great photos! The Wenonah II is impressive, and the ice cream sounds pretty good too. The steamship is a good capture also, surprising she still is operating.

oh my it was the last weekend of summer. so quickly it had arrived.

i would love to take a spin/cruise in that lovely boat.

Lovely for a sightseeing trip :-)

Glad that you enjoy so adorable day and your pictures are beautiful.This huge boat is amazing, I would love to join those tourists , imagine...what a cool adventure for me!
Léia

Two lovely ladies, a piece of traveling history.
I love the fact that they are still sailing.
Restoring of old ships are a sought for craftsmanship here at the coast.

beautiful vista of this steamer, these are so wonderfully maintained

Wow, a boat that's over a century old and still in service. Amazing. They just don't build them like they used to, do they?

These historic vessels have such charm when compared to the larger transport boats such as BC Ferries. Your “drop-dead delicious” ice cream has me wanting to taste the flavor!

Thanks for the pictures of these beautiful ships.

That is a really beautiful boat. Nice shots.

Lovely old boat and I wish I was on it. Beautiful photo.

She is a beauty. I love steam ships.

They're both beautiful. Would love to be a passenger on either one of them. I love boats and ships, and water of almost any sort.

Lovely shots and a beautiful place to visit!

Glad you had such lovely weather.

P.S. There is a road in a nearby town named Ojibwa Trail. I wonder if any of that tribe lived here?

ah, there is so much romance to the Segwun and it is wonderful that it is still running!

So lovely and romantic!

Have a nice week,
Greetings, Bram

Seen on My World Tuesday

This boat is an antiquity! Such ships have character and create a feeling of nostalgia. Have a great week!

I would not mind a boat ride today. My world it grey, grey and more grey.

i'd love to be in that boat.:p she's beautiful. glad to know you're enjoying the last days of summer--we're still having torrential rains here.:(

Thanks for the lovely photo of the Segwun. I meant to go up that way all summer and never quite made it. Maybe next year.

I'd love to take the cruise. Or try the ice cream. Or both.

Great shots of the boat. Lovely and beautiful. I am sure you won't have a lot of such great days remaining before the winter. Even here in Colorado, the trees have started to prepare for the fall

She looks mighty proud! Great shots, and a nice place to enjoy the last summer weekend ;-)

Gardening in a Sandbox said...

Fantastic shots of the boats. Looked like a perfect day for a sail. I envy the Kawarthas.

Business must be brisk, I see a lot of tourist. The weather looks great for a perfect day to be cruisin'.

These are great shots! :)