All Aboard/ My World 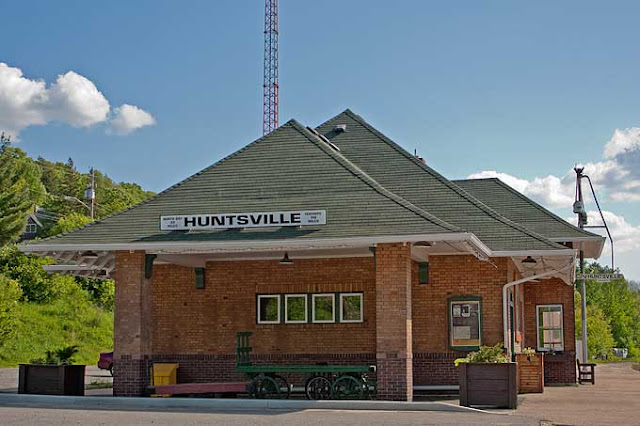 Huntsville, Ontario: North Bay 82 miles. Toronto 146 miles
This Heritage Railway station was built in 1924 to support the economic development of the Huntsville area. After all these years, the station and grounds are still a work in progress! Plans are underway to construct a pedestrian walkway over the train tracks to connect thus building with a nearby park and trail system.. 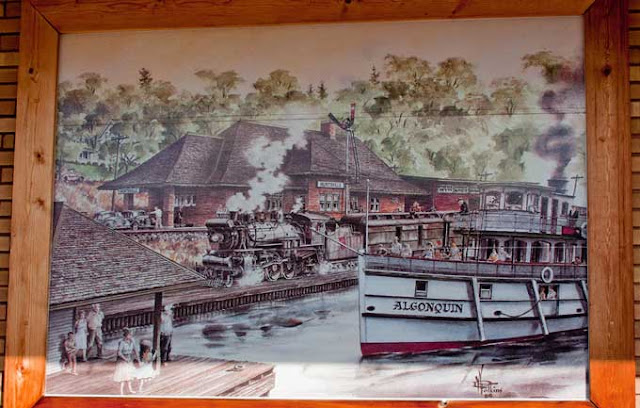 Hung on an outside wall of the station
Some of the site's former glory will be restored when a  dock is constructed similar to the old steamship dock in the picture above. The dock will be used for boating on the nearby lakes.

The train station will be revitalized too, providing comfortable waiting area for bus and train passengers, and the old baggage room will contain historic displays of train and steamship memorabilia.

It's refreshing to see this old building appreciated, not torn down like many of the stations have been. 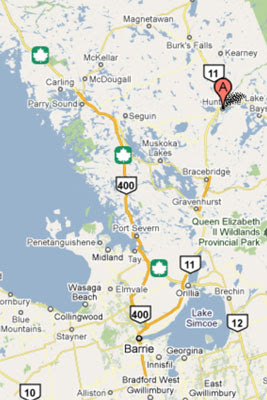 Huntsville is north of Lake Simcoe, East Gwillimbury is south
I am linking to My World.
Posted by EG CameraGirl at 6:50 AM

What a great restoration project. I like to see work being done to hang on to history.

Being a history buff, I'd love to come see this great train station. I don't think i've ever seen a train right next to a boat before. Pretty cool!

I absolutely agree with you! We have been too quick to destroy the precious buildings and artifacts of the past so it is very cool that this train station will get a second life. I love the sense of adventure historic trains and stations bring to a community, especially when they are respected and integrated into the community.

I'm glad to see that this wonderful station will get a second life! it deserves it!Thank you for the map,it 's a good help.

I love seeing your world...I don't have to leave my house to do it.

What fun. I love veteran railways and old trains.

Truly amazing that the station is still working!

Oh yes, that is worth smiling about when they would like to rebuild instead of tear down historical sites/building.

A lot of things going on in Huntsville!

If only walls could talk! Think of the stories that place could tell!

Huntsville is a happening place.

Such a restoration project is so good. Wonerful to see people work on it.

Oh, when I think of the problems and delays and political wrangling going on with our old train station of where to move it and what to do with it... this brings a tear to my eye.

Oh such a charming place! And well kept :)

I, too, love to see projects like these that help us hang on to history and not let it all slip away! Terrific captures as always! Hope you have a great week!

Hope I'll be around to see the restored station. Sounds very neat!

I'm so glad they restored this jewel. I love trains and train stations, particularly ones with a history. Interesting post.

It looks pretty good for an old station, EG. The rest of the plans look good. I am all for restoration of our heritage.

Speaking of which, you are probably right about low ceilings in the house I posted today. I looked at some 18th century homes when I moved to Hartford three decades ago, but I am far too tall to deal with low ceilings (and bad plumbing!).

I'm glad to see a historical building has been preserved and is still a work in progress. The station building is simple, but graceful and laden with history. Great shots.
Have a nice day!

I love old buildings, I agree that it's nice to see them trying to preserve it. Nice shots!

This is a beauty...though in all honesty, I don't think I have ever seen a railway station that was not beautiful. I always wish I could have one for a sewing studio.

I am glad that it is going to be used and sound like part of something really nice.

are you a train fan? some of my nephews are, and one an tell you all the trains in Thomas the Tank engine.

Nice station. I really like the painting hanging outside.

it's refreshing to see projects like this, it's a promise for the future by preserving the past. it's a great building, with the repeating roof lines and the colorful brick. great shot EG. it looks like a glorious day.

Hi there - I am always interested in the way we deal with "heritage" - I was born in a house that is about 300 years old - and it was nothing out of the ordinary! - I live in a house that was built in about 1915 and we have a "heritage overlay" as part of our planning controls and your railway station was build in the 20's. But each does have a heritage value.

I wonder when (if?) we will ever see the heritage value of car parks and shopping centres!

I do understand your happiness about this building and area that will survive ;-)

I love these old train stations, they look so romantic !

Love your train station...remember, I am from the age of riding trains to and from college as well as for vacations. Those are those slow paced days of old. Glad all the work is being done with and around it to preserve it for years to come. Your shot is lovely. Seeing the old picture adds so much to the post. Genie

Railway stations always seem to be interesting buildings. The old ones, that is. The modern one in our town is indistinguishable from a bus station.

But I'm glad this older one is being preserved.

A beautiful summer photo and a beautiful story of historic preservation.