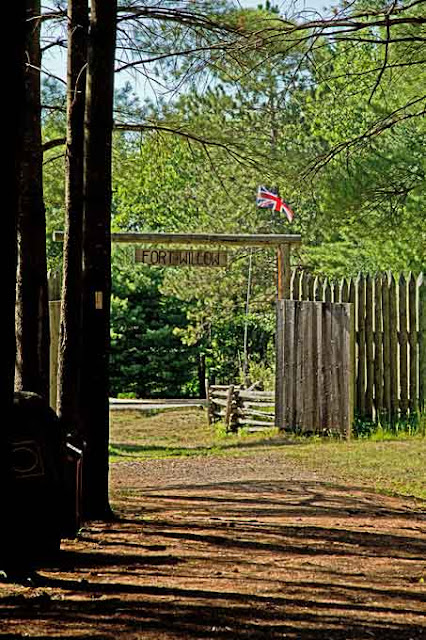 Notice the British flag inside the palisade. At the end of the War of 1812 (actually 1812-15), this fort was a supply depot that helped  ensure that Canada maintain the geographical  boundaries it has today.

Fort Willow was strategically located, part of the Nine Mile Portage between Lake Simcoe and Willow Creek, which empties into the Nottawasaga River and eventually into Lake Huron. 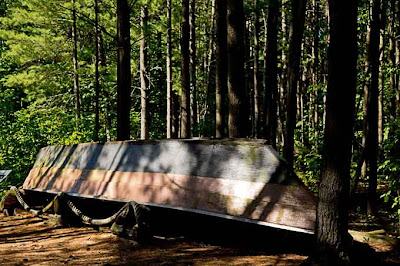 In the spring of 1814, British soldiers arrived to fell trees and build bateaux - stable,  flat-bottomed boats suitable for carrying heavy cargo down creeks and rivers. 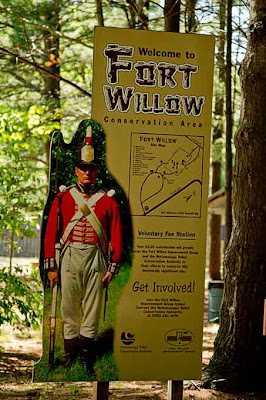 During the War if 1812, this area was known as the northwest sector and British forces were concerned that American soldiers might try to enter  Upper Canada (now Ontario) through the "back door" - Lake Huron.

The fort included eight log structures, but only part of the site has been restored in an attempt to blend the historic site with a conservation area (Minesing Wetlands). 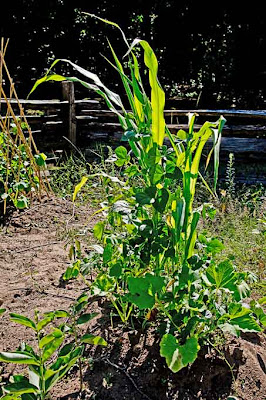 Planting squash, corn and beans together was a traditional First Nation strategy.  The first sister - corn - grows strong and tall, a place for the third sister - beans - to climb on. Meanwhile, beans fixed nitogen to the soil providing fertilizer.
The second sister? Squash, which provided shade, keeping the roots moist and cool.  Also the prickly squash leaves discouraged hungry predators from helping themselves to the ripened corn. 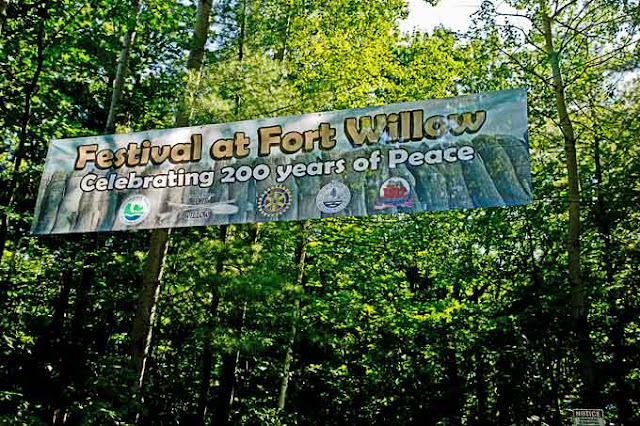 More photos from Our World can be seen by clicking HERE.
Posted by EG CameraGirl at 6:19 AM

Oh I would love to go here and learn more about the history. Awesome pics. B

I have never heard of this. This would make an excellent day trip when dh is on vaction.

Thanks for the idea,

Very cool bit of history and agriculture. Not everything has to be planted in straight rows.

I enjoyed reading this and your photos are great, love that dappled lighting.

I love to visit places like this. Thanks for the photos and info.

ohh i just love this kind of stuff! they have a bateaux festival here on the james river every summer...haven't been yet, maybe next year!

me to on loving to go there. and i have read in books all my life about Bateau but never seen one.

An interesting piece of our history and a testament to the fact that given time and clever strategies, conflicts and ownership claims can be resolved peacefully.

Really interesting EG, I must own up to not being that familiar with your history so it's always good to learn a little more.

Wow, I've never enjoyed a history lesson more. You are such a great photographer!

Thank you for your excellent photos of this historic fort. The British were trying to gain control of the Northwest Territories, now the Ohio River valley, by arming Indians against American colonists. The British burned Detroit, and then fled back into Canada. They occupied Washington, DC, and burned the Capital Building and the White House. But in the end the British were defeated at Fort McHenry outside Baltimore and current borders with Canada were established by the 1814 Treaty of Ghent. This was the second American war against the British, and they did no better the second time.

the 3 sisters gardening is very interesting!

Nice. Also great garden tip to get back to!

Amazing photos and peek into a chapter of our (entangled) histories! Love this - I lived for a time in Baltimore, where the British were defeated and a captive Francis Scott Key, helplessly watching the whole thing unfold, penned what became lyrics for the U.S. national anthem. How nice to see this other aspect of it!

Great tour of Fort Willow, and that three sisters planting is really interesting, hadn't heard of that before.

I hadn't heard of this fort or the reasoning of the 3 sisters planting. Cool!

I like that three sisters approach to gardening. It makes a lot of sense.

Marvelous post and photos and I so enjoyed the history!! A wonderful tour indeed! Hope your week is off to a good start! Enjoy!!

Looks like a neat place to visit and I love the history!

I am a little War of 1812ed out. Ite seems we are hearing a lot about it these days with the anniversary. :) But this old fort does look charming and rustic.

I'd never heard off Fort willow, so now I know - thanks!

I had not heard of Ft. Willow...but it looks fascinating and I'd love to visit...thanks for the commentary!

This looks like a fun day trip and learning a bit more about history. I like the opening shot...."Come on in!" Thanks for sharing.

Someday I am going to make it to Canada and see lovely places like this!!

A new place. Nice learning about it.

We visited a fort last summer in southern Ontario. It was very strange to us to visit a fort where the Americans were the enemies.

Thanks for showing Fort Willow.

Ah, yes. The 3 sisters! I loved teaching Native Studies! Did you get that wonderful rain today?
Greetings from Cottage Country!

Thanks for the history lesson. I really enjoyed learning about the three sisters garden. That is really neat.

Beautiful. Going to places like this always relaxes me.

Great history info, looks like a good place to explore.

Lovely shots of a great place.

Looks like a place that is rich with history.

Thanks for the comments on my blog - I got pretty excited when we found the whales - especially as they were a "bonus" rather than the main game!

Great pictures of shows in owt.
Wishing you a good day :)

I would love to visit this place!