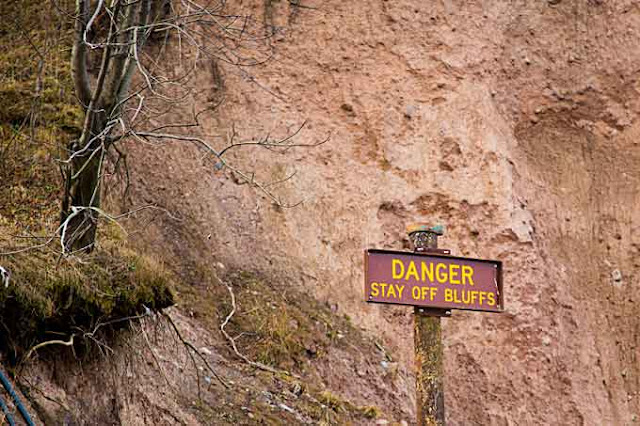 D is for DANGER,  DRUMLIN and DEBRIS

During a recent visit to Upstate New York, my husband and I visited Chimney Bluffs on the south side of Lake Ontario. The bluffs are actually a DRUMLIN (a hill that's shaped like half an egg) formed 11,000 years ago by a glacier. 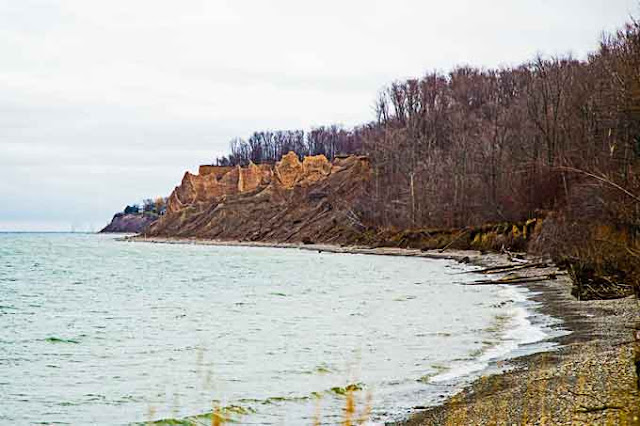 Over many centuries wind, rain and waves have eroded the drumlin forming sharp pinnacles and cliffs that are tempting to the adventurous but too DANGEROUS to safely climb. 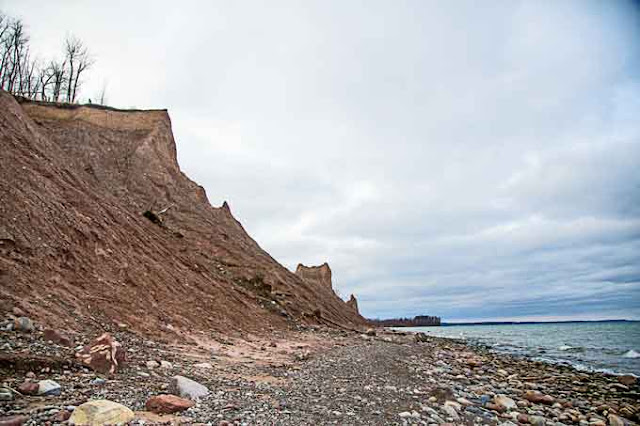 Erosion causes the pinnacles to look different from year to year. This drumlin is made of reddish clay along with rocks and boulders. The clay is washed into Lake Ontario but you can see some of the rocks here. 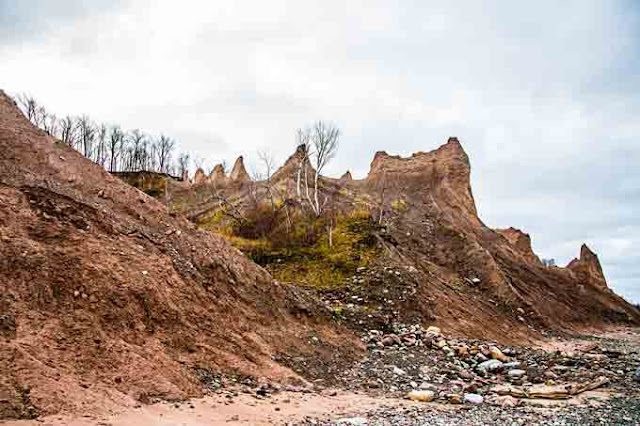 DEBRIS  falling off the bluffs

There IS a Canadian connection.  The bluffs have long been a landmark, and apparently during prohibition in the 1920s and early 30s, smugglers from Canada brought alcohol to these shores where it was hidden in local barns.  I don't think kids learn about this in history books, though.

I am linking to Jenny Matlock at Alphabe-Thursday HERE
Posted by EG CameraGirl at 6:05 AM

They aren't bluffing are they? It doth look dangerous. That wouldn't have kept me away when I was young and foolish but it would now.

I knew all about the alcohol. Nah, just kidding.

Wow I love history lessons from you. You always fill my computer screen with such beauty and history I love that thank you. B

I learned a handy new word today. Could be handy in Scrabble you know.

Reminds of the Scarborough Bluffs on the north shore of Lake Ontario. PS: It was nice of us Canadians to help the Americans through tough times during prohibition.

Love these pics. The rocks almost look like a housing development being built from a distance.

Interesting post and photos..Always enjoy a little history to.. We have some "Knobs" just outside of Lancaster,Ohio I haven' explored yet...

I learn something new every day, I have never heard the word drumlin, thanks for my new word of the day. and i like the drumlin a lot.

Great history lesson, something I learned new today. Those bluffs do look dangerous.

Such a great post with your usual great bits of history. I'd be scuffling through those rocks to find an interesting one to take home.

You've taught me something today!

EG! hi! isn't there something mystical and lovely about natural erosion that draws us in?

yes my camera is needing my attention today. the reason i bought it was the sales dude said it took great pics in or outside. urgh, but ...today i have time to study and see if i am the problem, which is probably the case. LOL

thank you!!!! thank you for your consistent attention.

You are so good at the alphabet game! Loved your comment that the kids probably didn't learn about the smuggling...cute!
Laurie

They do look rather unstable!

I learned a new word, drumlin, *and* a bit of history (the best bits seem to never be in history books:) - thank you...and lovely photos of your adventure too!

wow, me too i learn a new word' drumlin' with my limited English.
thanks for sharing these photo and the story.
have a nice day

The erosion is very impressive!

There are some marvellous shapes there!!

This is really special and I also learned a new word today.

Whoa..what pretty shore line though! The texture and colors are fantastic..Drumlin, got to remember this new word!

( A Creative Harbor) aka artmusedog and Carol ^_^

Cool photos of a very neat area. I kind of knew about the Prohibition angle, since I remember in "The Untouchables" their going to Canada to bust Capone's men transporting liquor there. Thanks for sharing!

Sometimes I CHEAT at Alphabet Thursday ( Gasp! )
Yep, I visit the 5 before and the 5 after but if I see you somewhere else I come looking for good photos! :)

Very nice photos.. and yes, it's a shame how our kids don't learn a lot about the history of certain places and things... I think it's up to our elders to tell them the stories.
Happy Holidays
Sandy

What a great selection of D words. I'd never heard the technical name for this type of landform. I love the history lesson too!

the bluffs look pretty scary, not for walking up on. Great post and probably not in the school books.

great shots -- and a new vocab word. Drumlin. Who knew?!

Your pictures are filled with stark beauty.

Those cliffs look very fragile. They must shed a lot of rock and soil every storm.

the Drumlins are very impressive.. And strange because the neighboring land doesn't look like that at all. How our lands are shaped is so very interesting. MB

Beyond the Dog Dish said...

Love the perspective of the embankment.

lovely landscapes! I learned something new!

Drumlins? Funny name - makes me think of Gremlins - LOL - sorry... The photos are great, I love rugged coastlines, no matter the weather.

Thanks for stopping by. I love your fence pictures...I just love wooden fences anyway. On your D post, I would love to be where you were. It looks so lovely.

I've never heard of a drumlin but I'm always delighted to learn a new word!

I shall be looking for funny hills when we go on our drives from now on!

Thanks for linking! Your pictures were quite dramatically delicious.

Aside from stunning photos, I've learned a new vocabulary, too ;) What a winner!

A "Drumlin" - You added a new word to my vocabulary today.

And your photos are always awesome!

I like the bit of history...love that second shot.