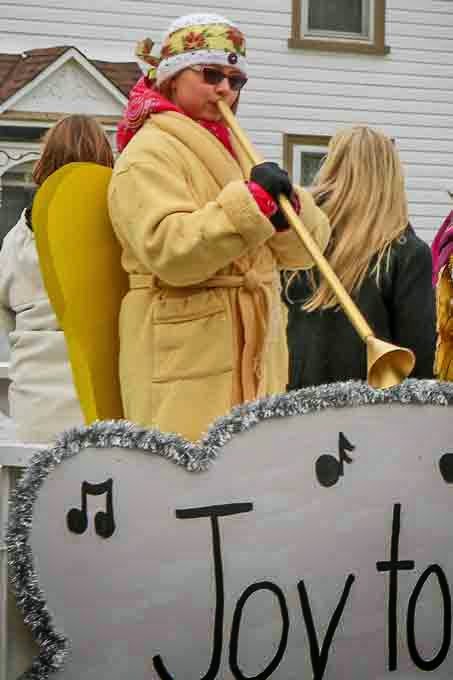 This week I am again playing Ashley Fisk's scavenger hunt and here are the prompts: Joy, White, Stripes, Tree and Shape.

Yesterday it was overcast but in spite of the crummy weather, I attended an East Gwillimbury parade - the Mount Albert Santa Claus Parade - and took a photo of this angel dressed in gold playing "Joy to the World." 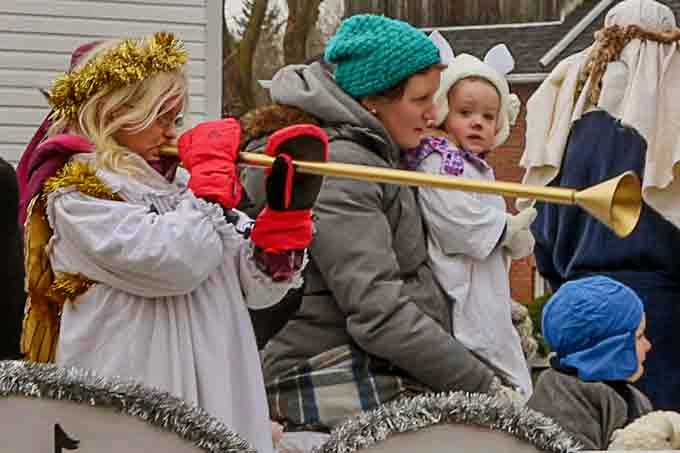 On the same float I spied an angel dressed in white. She was playing the same tune, I think.

The North Pole at the front of another float was decorated in red and white stripes... 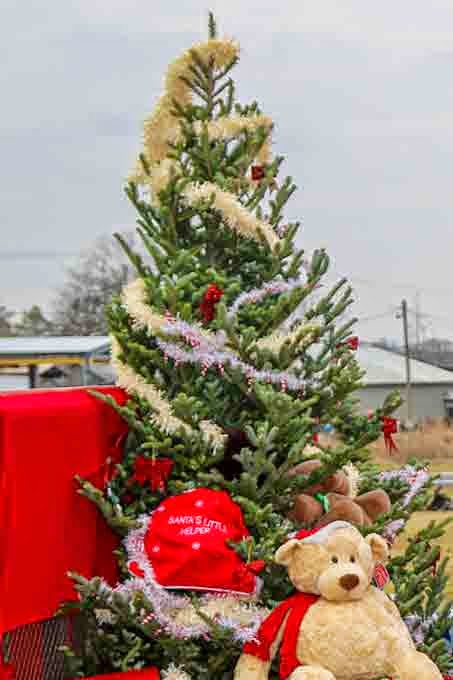 and at the back of the float a tree was decorated with gold and silver garlands. 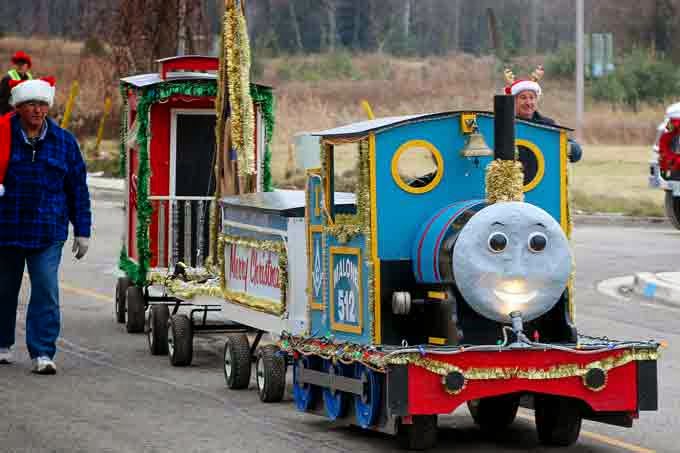 And this train engine  - not sure if it's Thomas  or the Little Engine that Could - proved that over the many years that it has appeared in this annual parade that it is still in very good shape.

I am linking to Ashley Sisk's Scavenger Hunt HERE

Posted by EG CameraGirl at 4:30 AM

Another fun day for you and your camera, eh. :)

PERFECT! they are all perfect.. and i love them all...

I absolutely agree with Sandra. Perfect images of the season.

Super shots, one and all. Thomas or the one that Could was a fitting end.

Any parade is a great photo opportunity and you have certainly taken advantage of this Christmas celebration. Well done.

Oh that was too easy for you EG :)

Oh boy … the angel playing a musical instrument with those massive gloves on is surely a talent in itself. :)

Looks like there was a lot of 'joy' found here.

Splendid selection, EG! It looks like everyone enjoyed themselves.

Stouffville had it's Santa Parade yesterday too, but the best Santa Parade is in Schomberg.... I'll be posting pictures soon!

Cute pics! Really gets one in the holiday mood.

What a fun parade and perfect for the season!! So colorful and so great for the kids! I love it -- and your photos for the day, as always!! Hope you have a great new week!!

Great finds for the theme, and it seems you had a great momeet !

Great finds! Love the teddy bear in the fourth shot.

I like the train and that big tan teddy bear by the tree. Glad you had fun.

Must have been so cold, the poor angels have to wear mittens. I love that little train, it is so cute! Does it reside somewhere in the city where kids can ride it regularly? Love your greenhouse frames below, especially the adjust color version.

I think our Christmas parade got continued to another day because of all the rain, rain, rain... We had a lot of rain. These are fun and fit the scavenger hunt prompts well.

A lovely Christmas parade, and no doubt a fun time.

I especially like that second angel and her big red mittens. It looks like she's putting her all into it.

How fun to find all the prompts at the parade. It looked like a great parade. - We had our light parade here last night but I didn't go as it's to cold to be outside that much at night now.
Well done on the hunt.

Aw, c'mon, EG. That was too easy. You should repeat the exercise with subjects from Albania.

You got all of your scavenger hunt finds in one stop! Very nice!!

these are great :-) the parade looks like one you'd not want to miss.

I love the white angel with the warm hands!!!

I'd say you make a very good scavenger!

What a great little parade! You got all your Scavenger Hunt items in it too!