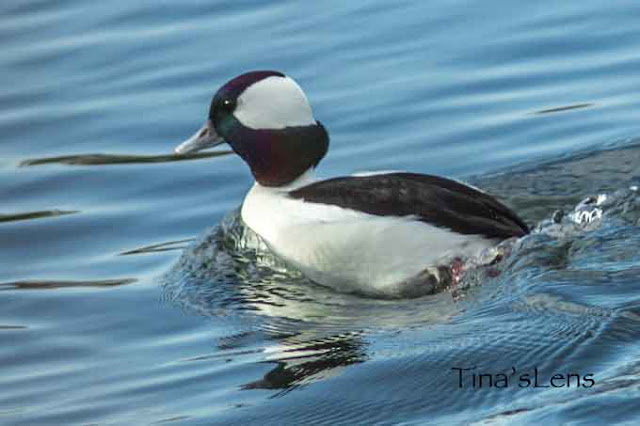 Mid December and no ice. Four Bufflehead ducks were swimming amongst  the docks at the yacht club in Whitby Harbour - three males and one female. The males were showing off, trying their best to impress the female. 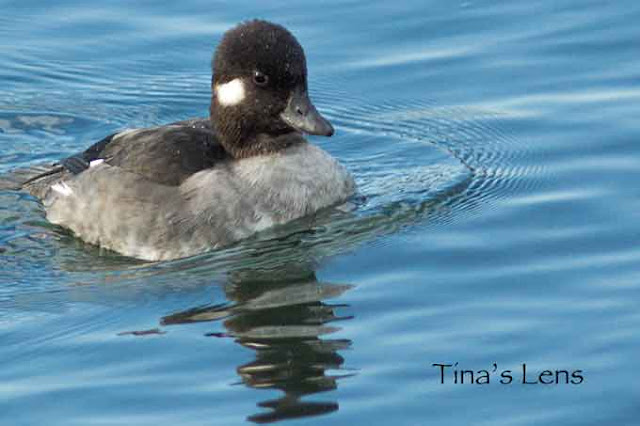 For most of the time I was hidden behind some dead weeds, standing very still so they didn't notice I was there. Unfortunately the weeds were often between them and me, but every once in a while they  came into my lens's view. After a few minutes they moved into deeper water. The males appear to be disinterested in the female here...but it's not true. On the right one male is chasing one of the other males away.

What a beautiful creature that Bufflehead is, Tina. Great captures. Thanks for sharing. Greetings, Jo

Neat for you and us.

It's a complicated business courting! 'Bufflehead'.. made me smile, sounds more like a term of endearment than a name :)

Hello, the male Bufflehead is a beauty! Great sighting and photos. Happy Tuesday, have a great week!

It hasn't been cold here either. I think the plants and animals are confused! :)

Pretty birds. I kept imagining a picture of you standing still in the weeds though. Someone should have captured that shot, LOL!

That lady bufflehead should have been very impressed that three handsome gentlemen were courting her!

The males are always on the lookout for a nice female - and that is not only the ducks!

The male Bufflehead is a pretty bird. I wonder which male won her heart.

Gorgeous shots of these beautiful birds. Amazing no snow yet!

Those guys are so cute!! Great shots too.

What pretty birds, too!

It's hard to be dashing and debonair when you're called "Bufflehead" but they seem to be doing their best.

They are here [Marin CA] too! I'll do my bufflehead post and link up!

the first word that pops in my head is 'darling' i think they are just darling. to cute for words. the second one looks like he is smiling at me

Love the Buffleheads and the dappled waves on blue water.

Love Buffleheads...they are so cute!

Always interesting to see waterfowl...I do not know many of them. And for the life of me, cannot seem to retain the ones others show. Maybe it would be easier if I saw them myself...

Watching duck courtship can be fascinating.Glad you were able to get good pictures.

They're actually pretty well behaved for courting ducks! I've seen some X rated behavior from local mallards when we lived on the Lake. Your buffleheads are very handsome duck!

That is a really tricky duck to get photos of.....I'm not sure if it's the coloring or not but every time I try, they almost certainly blur! I think the day has to be overcast for a decent pic. Great captures!

We've been unusually warm here too. Lovely captures of the birds.