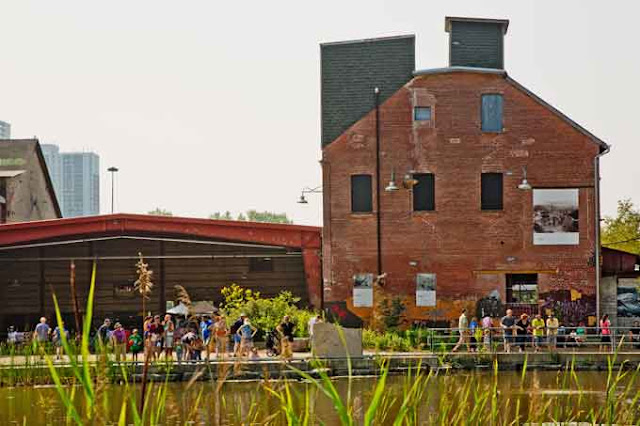 Backside of the Evergreen Brickworks, Toronto

Saturday was a hot, hazy day, but - in spite of the heat - many Torontarians were at the Evergreen Brick Works, a.k.a. the Don Valley Brick Works, a former quarry that has been converted into a cultural centre and city park. 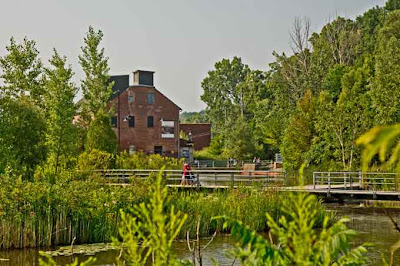 As seen from the ponds

The park includes naturalized ponds and the buildings  have been restored by Evergreen, a Canadian environmental group that's dedicated  to restoring nature in urban environments. 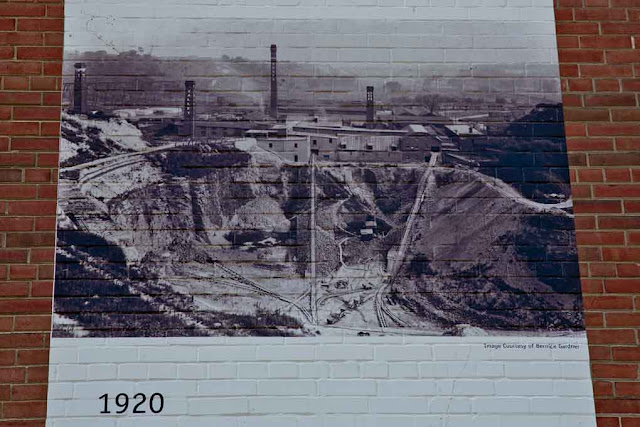 One of many old photos showing some of the Brickworks' history

Originally, the land was owned by brothers who operated a paper mill.  While constructing a fence, one brother discovered good quality clay perfect for making high quality brick. By 1907 between 85,000 to 100,000 bricks were made here every day. But by the mid 80s much of the usable clay had been quarried. 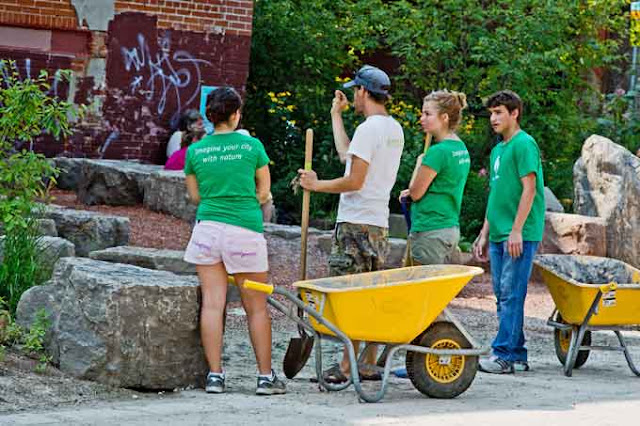 Workers wearing t-shirts that say: Imagine your city with nature 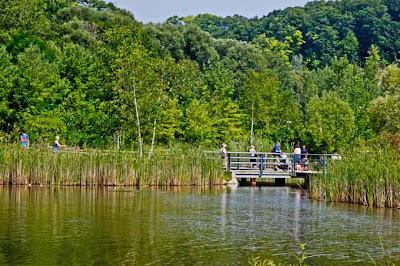 In 1994 the quarry was filled in and landscaped to create three ponds, water being diverted from the nearby Mud Creek. The rest of the area was planted in native species. Fish, birds and other wildlife have moved in. 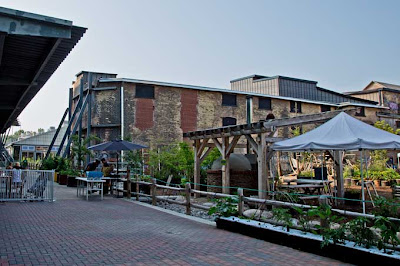 The brick works is now a destination enjoyed by families and individuals, the offerings including an organic food market, heritage tours and garden workshops. 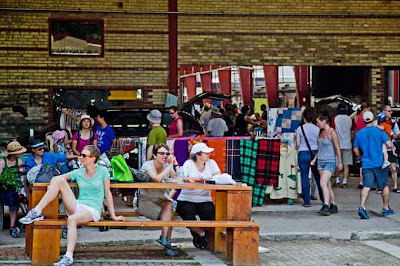 Resting in the heat 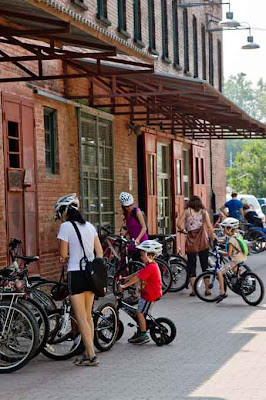 More photos from Our World can be seen by clicking HERE.
Posted by EG CameraGirl at 5:36 AM

What a great place, glad it is returned to nature. It might help to help people enjoy the outdoors. I like the trail and pond. Great post and photos. Have a great week!

What a great site it's become and now so many people can utilize it in so many different ways.

I really like these projects that take old industrial sites and remake them.

I feel obligated to point out that the moth was on the outside wall of the building!! (but I do take my camera almost everywhere!)

This would be a great place to explore! JDanie would love all the memories he would find on the ground.

What a great way to save the place. Now so many can enjoy it.

Well this is one place I have not been too but now I am going to make sure I do go and take a look. Great photos. B

I love this place! Always something to see and do there. :)

What a wonderful restoration of the old brick yard.

This is soooo cool! What a great place and great idea! And I just love those "t-shorts"! Heh, heh!

This is soooo cool! What a great place and great idea! And I just love those "t-shorts"! Heh, heh!

This is such a positive story of transformation … and a great example for all other places that once functioned industrially. So much of the world CAN be a garden when people put their hearts and minds into making it that way.

fantastic idea on the quarry conversion.

I wish more old industrial facilities would get this kind of new lease of life! Just wonderful!

Good to hear that the area was redeveloped into a wonderful interesting place to visit. Love all the brickwork.

I love that they converted it into something the public could enjoy! Around here, it'd be a 50/50 chance someone converts it into insane luxury lofts (in NY, it'd be 99.99% certain). A beautiful site.

Great looking place. I really like the old photo.

That's a lovely place; always nice to see nature restored. If I ever make it to Toronto, I'll put this on my must-see list.

Thank you for your comment on my bracelets. More to come.

Materials that built a city...

What a great use of the old building. A beautiful area.

It is a most interesting story.

What an awesome place to go! How fun!

What a great way to restore an eyesore to a useful thing!

Nice seeing this, Ms. T.Guide. It reminded me of the brick factory we had in our town. I loved those tall thin round smoke stacks.

Later, like yours, the stacks were torn down and the place was converted to a mobile home manufacturing plant.