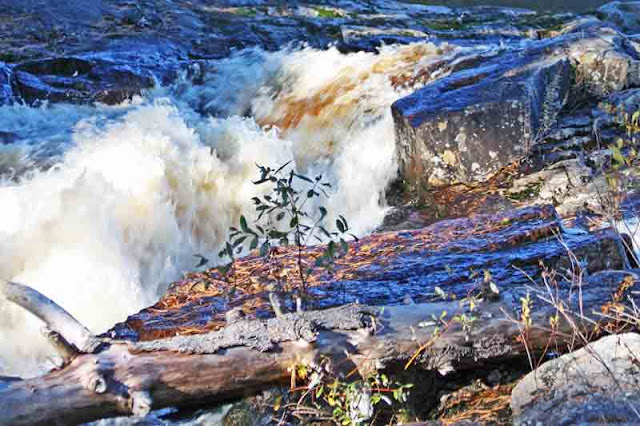 Seguin Falls on Highway 518 northwest of Huntsville, Ontario
Ontario is known for it's vast number of lakes, rivers and streams.  The Ontario Ministry of Natural Resources claims that the province has more than 250,000 lakes. 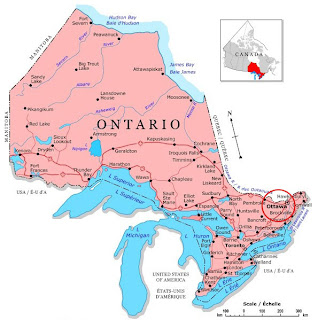 Ontario and the 5 Great Lakes- click on the map and you can see where Huntsville is located, left of the red circle, which is Ottawa, Canada's capital
The falls in the first photo is on the Seguin River, which may feel very far north to many of you but is actually in the southern half of the province. 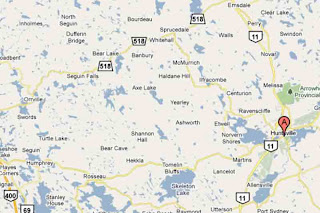 Click on this map and you'll get a general idea of how many lakes there are just west of Huntsville. Seguin Falls is on the map on Highway 518.

Driving to it could make you feel it's in the middle of "nowhere."  But it can be reached by road so it is not too far from "somewhere." 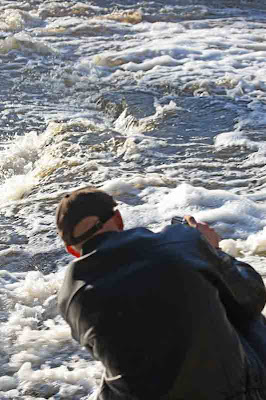 A very nice stranger on on some slippery rocks

A local photographer was also out in the beautiful weather, but closer to the rushing water than I wanted to get! 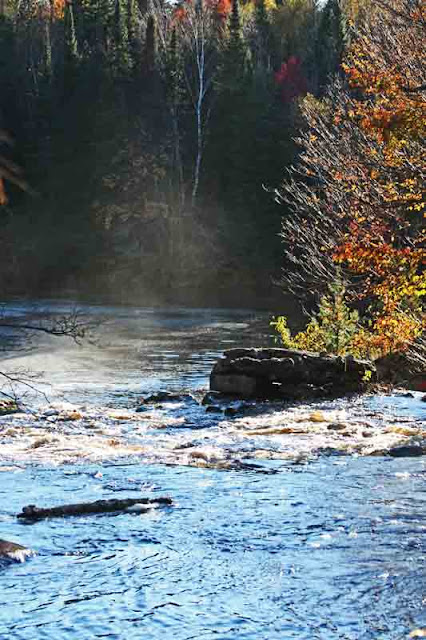 Looking further down the river below the falls
The rocks were slippery with fallen pine needles and the path very steep so I didn't climb down to the bottom to get a photo of the falls.  No railings and walkways here. But on the positive side, no human litter either!

Visit My World Tuesday  HERE to see tons of photos from around the world.
Posted by EG CameraGirl at 12:01 PM

What a beautiful part of the world. I love all the shots and the first of the rushing waterfall is my favorite.

I do love the waterfalls! What a gorgeous place and your photos are superb as always. I think the first one is my favorite, too, with the rushing water! Hope you have a wonderful week!

Incredibly beautiful! I really like the last photo below the falls.

Thanks for sharing this beautiful part of your world with us. We really need to get up to Ontario to see these lovely sites in person.

that is really fascinating to learn that you are the land of lakes :)

Glad you didn't go down onto the rocks - that water looks like it is really moving! Great shots!

wow, these are awesome shots! I love the color and intensity of the falls...beautiful!

Lovely photos. I love the little bit of mist hanging over the river. Looks almost ghostly!

Wonderful fall photos. The water looks cold. But beautiful. Thanks for sharing.

I couldn't believe the number of lakes I saw when on my way from Edmonton to Toronto by train. Simply wonderful, as your beautiful photos show. I can't pick a favorite, although I did look and look for the local photographer you mentioned in that one shot, and all I could see was a ghost. Did you take that picture on Halloween by any chance?
-- Kay

Love the gentle spray of mist in that last shot. Wonderful photos!

This world is a beautiful place. I like your pics here today. It is so good to enjoy the land without litter.

These shots are amazing...don’t think I would be out there on that slippery rock with my camera. Scary! I look looking at waterfalls and rushing water from a distance. You certainly live in a gorgeous area of the world. Thanks for the comment about the reflections in the chrome water fountain. I was trying to focus in on just the neat chrome when suddenly I saw that WOW reflection of the trees in it...I couldn’t believe my eyes.

Thanks for this informative post! I really didn't know that there were so many lakes in Canada!
Thanks for your visit. I agree with you that this world should be a world of peace and hatred should be banned.

You live in a beautiful part of the world with all those lakes, I love to see water, not much close by where I live.

Certainly an amazingly gorgeous place to visit so close to home.

Oh please my dear, promise me never to climb down the slippery paths, neither nor the slippery rocks!! I would not dare that like the stranger did.. You never know..
But your photos I just love!! Of the beautiful waterfall!! W-O-W!! Hands up for you.. :))

this is a beautiful area also with those amazing autumn colors, thanks for sharing this :)

I agree with Mar. This place is marvelous.

Great post, I do so love the lakes of Ontario and you present this rushing river and waterfall so well.

On steep and slippery slopes it is advisable to have a stout staff to brace yourself against the slope. They are a recommended item for bushwalkers here.

Have a great week while the weather holds.

I was holding my breath looking at him next to the water. Scary.
Beautiful though. It looks very cold too.

Good lighting! The colors on the edge of the water sure looks like a prism!

I lived in southwest michigan so I've often seen this map. But I had no idea you had so many lakes up there! Love the photo of the rushing water :-D

Wow, these are awesome photos of a beautiful scenery!

Wow, what a great place to explore!

Looks like a must-go-and-see location!! But, don't tell too many people about it or they'll ruin it with litter and mis-use. Great shots on a beautiful day.

I sure like your world in Ontario's Lake Country. For me it doesn't start to get desolate until you get closer to Sudbury. My former in-laws lived there up north for some years. Whenever we drove cross country to BC, it was the stretch beyond Sioux St Marie to Kenora that seemed to go on forever.

What a stunning place! How lovely to live within reach of so many lakes and waterfalls.

The falls are spectacular!

great place to visit. I love the shot that looks like a cave. :)

I love the sound of a waterfall. I can nearly hear it looking at your photo's.

Thanks for the maps!

So beautiful EG. "No human litter" I like that.
Excellent photos---did you get misted on? LOL MB

Looks like a wonderful place to visit. I wonder if you get Dippers in that rushing water? So glad there is no human trash! I like nature just as nature intended!