Back of Northern Pintail that's stretching in between naps

Isn't he handsome? I was high up on a river bank looking through brush to capture photos of this handsome drake. He was hanging out with mallards and Canada geese with whom he must have felt safe. 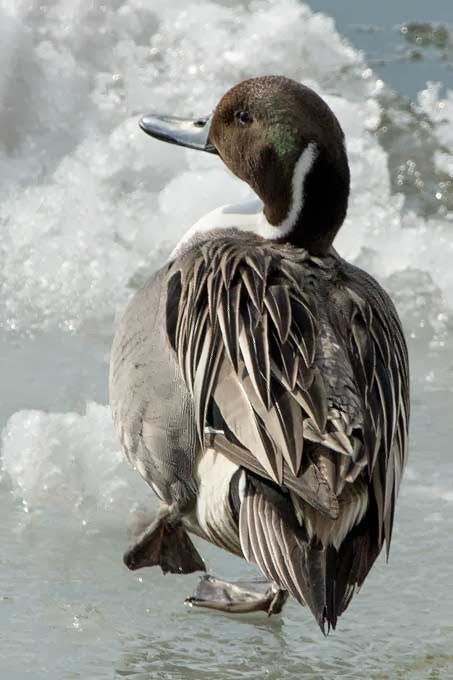 The ice floe he had been (and would soon again be) sleeping on was slowly moving down the river. 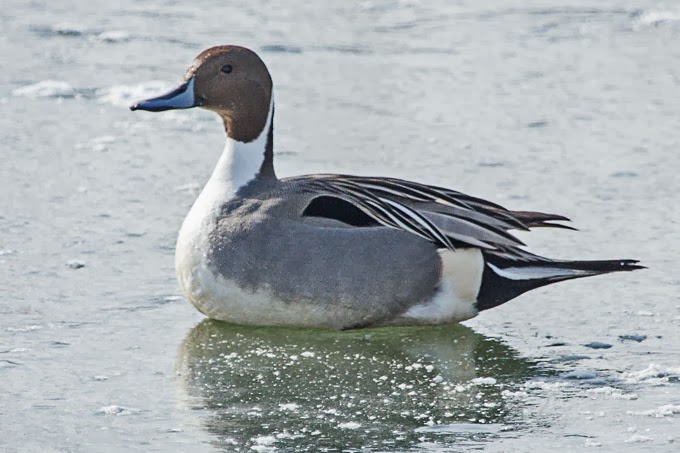 Side view taken two days before the top two photos

I had seen him a couple of days before but was unhappy with the photos I had taken (third photo) because I had to shoot  part way into the sun.  But at least he was out in the open and not behind shrubs as in the top two photos. I guess I may have to go back to try to find him again. lol

Pintails breed here and are among the first ducks to return (although I suspect this guy may never have left).

I am connecting to Stewart M's Wild Bird Wednesday HERE

Posted by EG CameraGirl at 5:36 AM

sure is handsome; great photos

He is very distinguished indeed.

Handsome guy. I especially like that first photo that shows the bars of color on his wing. I've left with visions of you in the bushes though.

Stretch stretch, these are all good-looking shots to me:) Hopefully you'll see more of him!

just beautiful. love that you caught his wing 'badge' and even a tinge of color on his head!

that is how i look when i first get out of bed... but not nearly that pretty while doing it... the details of his feathers are fantastic.

He is gorgeous and handsome.

So very stunning indeed! What a beautiful day to wander about too!

Wow, he is beautiful! Great images.

I was just going to ask why they were there in the winter but if they just returned, that is a good sign.

Love that little patch of green under the wing!

Absolutely stunning captures of one of my favourite ducks. I do love the Pintail. They've made me smile today.

He sure is handsome!
Those feathers are so beautiful.

He's such an elegant creature, EG!

I've always thought this duck to look smart. I can always remember seeing my first one on a small lake in a park, near where I lived.
All the best Gordon.

Extremely handsome.....and excellent captures on the subtle colors. One of the best looking ducks out there.

These are all excellent and elegant photos. I'm very impressed. You could do a whole book of "bird" pictures! The colors are right on and the pics are tack-sharp!

Wow! What a bird and fantastic shots ~ thanks,
Happy Week to you ~

That is a handsome fellow.

I like how hard you work to get the best shot!

Awesome closeups of the Northern Pintail. Enjoy the rest of your week!

He's real handsome, those feathers are pretty. Enjoyed your photos :)

The Pintail is an elegant duck and one that I have not successfully photographed,yet.

I like that spot of color in the first shot.

WoW, these are really amazing images!! Love all the feather detail you captured and that bright pop of green!!

Looks like he's making you work for those photos!!

It sure is a beauty! I am so longing for it to warm up a little bit and us be able to get out and go see something...anything...just so it is alive.

We went down to this one wildlife area a week or two ago and not a thing was moving. Finally saw a couple of three hawks. But they were all at a distance.

Those are nice. Just look at that green color in the first photo!

He's a beauty and your photos are stellar!

Sorry I am a little late catching up on my favorite blogs this week! Beautiful photos of the duck. Those feathers down the back are especially beautiful.