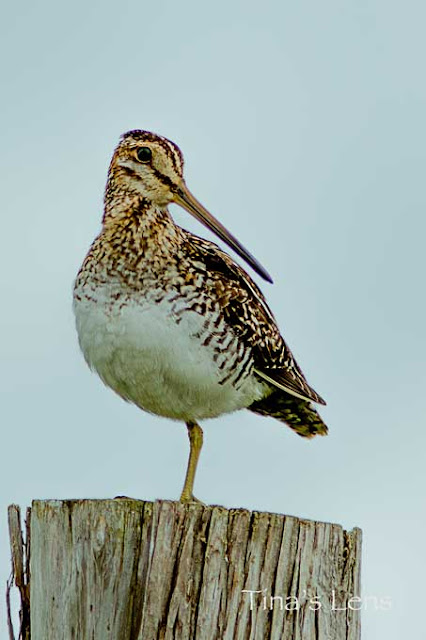 Wilson's Snipes are secretive by nature and usually appear only at dawn or dusk. But in late June on the Carden Alvar (north of Kirkland, Ontario), snipes are commonly seen on fence posts during the day. A well-known birder in the area told me that the snipes are monitoring their young down below. Once the babies fledge, the father takes the two oldest and the mother the two youngest. So this snipe could be either a male or female. (I don't know how to distinguish one from the other.) 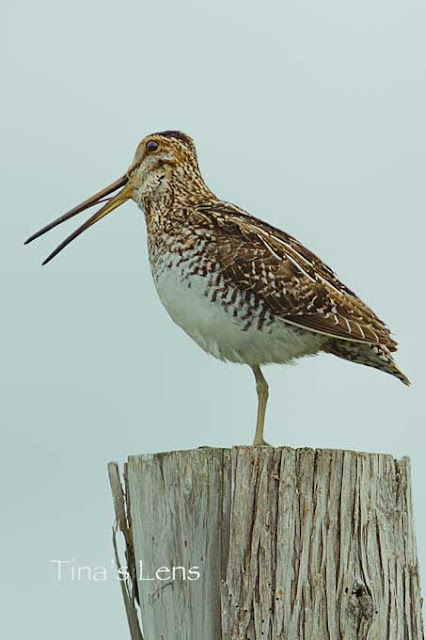 The young were probably foraging for insects and earthworms in the grass below the fence post.

This is a crisp and clear shot.

I'm always amazed to see pictures of these birds. In my younger days, I thought they were the figments of someone's imagination. :-)

What a cracking couple of pictures! Great looking bird!

Excellent snipe shots! Interesting learning on its visibility and u got nice detail on its images.

the detail in the photos are wonderful.

Now I know what a snipe looks like. Thanks for the info, interesting how the father takes two and the mother takes two. Always learn something from your bird pictures.

I suppose they are hard to find at night is how the old snipe hunting game was started! They're pretty birds but we don't have them here. Or at least I've never heard anyone saying they actually saw a snipe!

Great pics, the behavior of birds is fascinating.

Awesome closeups of the Snipes! I have only seen them from a distance. They are cool birds. Have a happy day!

Wow what a beautiful bird and the fact that he/she looks so pretty on one leg is awesome:) Hug B

I like the beak on the second shot... glad mom and dad work together.

Amazing birds and great captures, as always, EG!! They do indeed work together, don't they!! This is a new one for me, but you bring lots of new things into my world and I do enjoy them!! Hope your week is going well!!

Great pics of the snipe! When I was a youngster in Girl Scout camp, we used to go on "snipe hunts" in the dark. (Of course, these were just to prank people...)

What great portraits of these birds! Lucky you got to see them and share them with us.

Interesting info. I didn't know that.
Nice shots.
I was going to say
"OMG a one legged Snipe"--haha
MB

I did my best today, but your prowess and your birds are unbeatable!

Quite a distinctive bird!

what a great spot to strike a pose!! awesome captures!!!

two wonderful portrait shots and it was lovely to see his tongue in the second shot.

Great shots, EG! Another one that I haven't ever seen!

Gorgeous. What a treat!

Great photos of the Snipe. Wish I could see one this close! Thanks for sharing.

If only our clothes were half as attractive as what the birds wear. A fine fellow (gal).

Superb pictures of a fantastic bird.

You photographed the Snipe and its remarkable bill very well!

Excellent details in these shots.

That is the most amazing parenting story I've ever heard! Fascinating! And fabulous portraits too. Loved this post.

Wonderful shots and how interesting.

You caught some great details here. That first profile really shows off his/her head. Wouldn't it be a treat to have seen the youngsters below, too? (I know. One is enough of a treat.)

That's a great looking bird. I've never seen one before.

What a beautiful bird! xx

I had a near encounter with a common snipe yesterday. Looks almost exactly like yours. A fine image.

Spectacular Snipe shots! We only see them here in central Florida during migration and don't get a chance to see the juveniles. Thank you for sharing!

Lovely shots! Photographing a snipe is high on my bird wish list, but I have yet to get the chance

Holy smokes! You are one lucky lady! Great opportunity to observe this beautiful bird. Congrats!