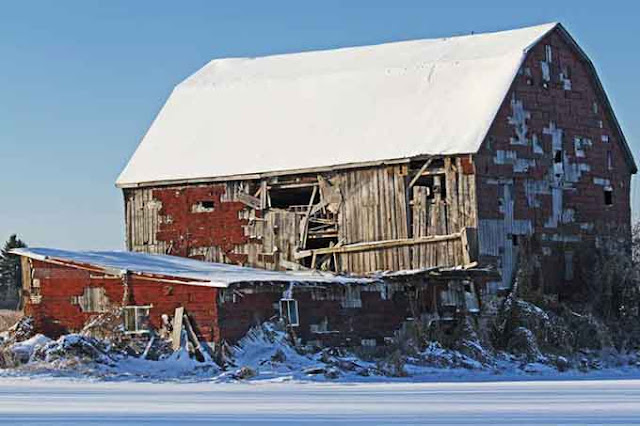 D is for decay.

I hate to see this barn fall apart.  It's not in East Gwillimbury...but it's very near my town, so I see it fairly often. Many barns in the Greater Toronto Area are being left to fade away.  The land is thought to be more valuable as future housing developments, I fear. And former farmers cannot afford to live in this area without getting better paying jobs. 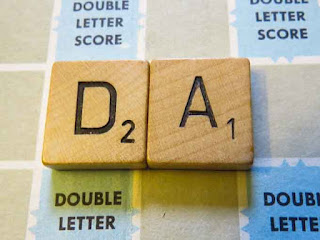 Bonus D-word: "da". This is NOT just the first and second half of da-da, one of baby's first words. It's also what a Burmese heavy knife is called.  Wikipedia says the word is spelled "dha" or "dah" but the powers that be at Scrabble say "da."


I am joining ABC Wednesday  HERE

I enjoy looking at the old barns, sad to think someday they will be gone. Haven't played Scrabble in ages but I'll try to remember that word (and its variety of spelling) for a future game.

A lovely old barn and a pity indeed that it is falling apart!
Here in Northern Ireland 'Da' is very common for Dad!

The crumbling old barn looks like a house of cards about to fall. The west coast is also laden with similar structures on land that will eventually make way for housing.

it used to be a beautiful barn. stories like this are happening all over our country, places falling down because people cant afford to live there any more.

Good morning, it is sad to see the barns and farm land disappearing. I wonder just how much housing is needed, shouldn't we also have farm land for the crops. Great post.
Happy Tuesday, enjoy your day!

The barn could use some love, but it looks great for photos.

The barn must have been a fine one when still in use.

It's sad to see all the barns go to ruin. The pace of development in the GTA is crazy...
I love your Scrabble words. They always give me a laugh.

Sad, but picturesque in its own way...

That's a sad sight EG! The way of many barn buildings it seems.

Boy that barn doesn't look safe at all! Too bad someone doesn't fix it back up.

it is a lovely barn...especially with the snow!!!

It does look like that barn is on its last legs. Sad.

And the housing developers, who only care about how much they can make off suburbs, don't give a damn that they're gobbling up useful agricultural land.

Looks like a very low point scoring word. And here I thought "foreign" words were not allowed in Scrabble. That poor old barn is fading away. Looks like its siding is falling away. Since farmers no longer raise animals, there is little need for a barn.

Da is not a word! Dha or dah might be words. The Scrabble folks are scrambled in the head. Duh!

Decaying barns are a very common sight. Too common.

Such a shame! It's like that around here near Vancouver. I remember taking a photo years ago of a beautiful white barn nearby and then just this past winter going past it and taking another shot. Same thing - it just seems to be falling apart. Such is progress, right?

'Twas ever thus with rural-urban migration.

Sad old barn. I wish we could hear the stories it might tell.
MB

The decaying barn is fabulous for photography but so sad for what it means.
I hate seeing the things falling into disrepair because people can't afford to be farmers any longer...all for progress???

I wonder if the "Barn Builders" go that far north to save the wood at least. I love that show because they use as much of the wood as they possibly can when they tear down a barn or other smaller buildings.
Before I saw your word, I thought of delapidated!

That barn looks very sad and unloved doesn't it. Such a shame. xx

What a great barn I hope it survives, smashing picture it looks so lovely in the snow...

That is a sad looking barn. (And you could have used "ad" with less quibbling.)

I love that old barn...I hate to think it of it falling apart.

Are you beginning to feel that almost anything can be a word? You sure have showed me some new ones.

We have some dilapidated barns around here, but I fear they will just continue to deteriorate. No housing developments in their future.

Yes, sad:( Good you take a pic of it, before it dematerialzes even more. Beautiful red against the white of the snow!

Sorry to see a huge barn abandoned to turn decay!

Somehow this barn reminds me of the game Farmville :P

I can always use another scrabble word. Love the barn. - Margy

The poor barn but it is photo worthy. Love it though. And I do love Scrabble.

I love shots of old barns - such texture and history.

so sad about this decay. The roof still looks so good.