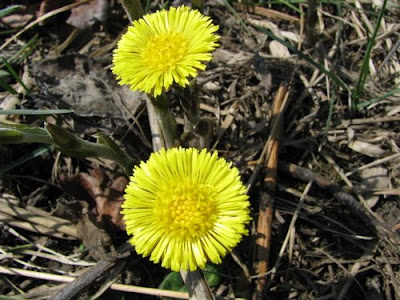 Coltsfoot (Tussilago farfara) – a perennial herb --is one of the earliest plants to flower in East Gwillimbury. The common name coltsfoot refers to the shape of the plant’s leaves, which you can’t see here. But they will soon appear now that the flowers are out.

The botanical name 'Tussilago' comes from the Latin 'tussis', which means cough. Coltsfoot was probably brought to North America by early settlers to cure coughs and other respiratory diseases -- the unopened flowers were used to make herbal teas. In fact, cotsfoot is said to be found in some modern-day cough medicines. 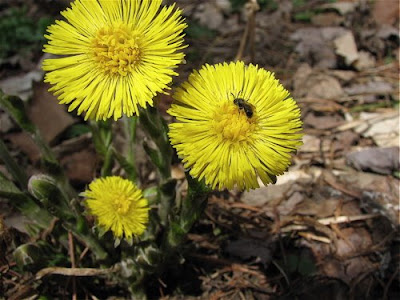 The plant spreads mainly through underground rhizomes but is also fertilized by bees and flies. In summer, the plant stores energy for the following year's spring growth. It thrives on gravelly and sandy soil as long as it’s damp, and it’s often seen along roadsides in sun or part shade.
Posted by EG CameraGirl at 8:55 PM

I see a little bee or something on the second one! I'm wondering if this is sometimes mistaken for dandelion.

Dot,
The bug looked like a flying ant to me when I took the picture.