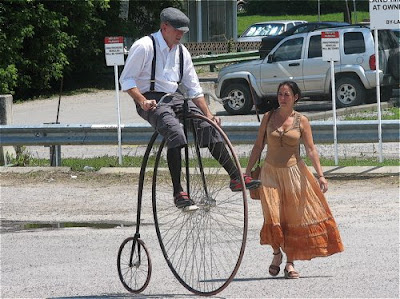 My friend, husband and I were visiting Uxbridge, the town just east of EG. Uxbridge was celebrating "100 Years of Anne" because Lucy Maude Montgomery, author of Anne of Green Gables, lived just northwest of town for a few years.

When I asked the rider if I could take his photo, his wife called out “sure.” (Ha ha! I think she must enjoy watching him riding around in circles.)

After I took the rider's picture, he hopped down to tell me about his machine. It was popular during the 1880s, he told me. But only men of means could purchase one as it cost an average worker six month’s wages. 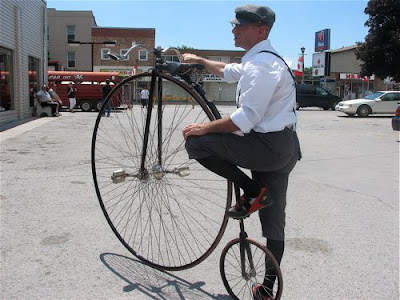 Why is the front wheel so big, I asked?

The fellow pointed to the pedals attached to the front wheel, pointing out that there’s no chain between the front and back wheels. Apparently manufacturers made the front wheels bigger when they realized that a larger front wheel meant the rider would travel farther with one rotation of the pedals. But the wheel could be as large as the length of the rider’s leg.

The bicycle tires are made of solid rubber, which along with the long spokes of the large front wheel afford a smooth ride. Unless of course the wheel hits a large stone or rut and the rider, high above the centre of gravity, falls off. That could be a tad embarrassing, eh?
Posted by EG CameraGirl at 12:02 AM

Now that is really neat. I could see myself falling on my behind right away. Did you get to try it? MB

I've always loved thos old bicycles. Thanks for the history.

I love the picture! I don't think I could ride sitting that high up. I'm such a scardy cat!

Very interesting. I think I would need a ladder to get on that!!
And I doubt I could stay on :)

MB,
No. I didn't try it. The rider said the inseam on my legs weren't long enough. LOL Besides, I doubt he had insurance. (only kidding!)

I know these as Penny Farthings

I don't think I'd risk riding on one..

I would hurt myself severely on one of these. The town of Evendale in Tasmania has an annual event they bill as the “largest collection of penny farthings in the world”. They hold a race around their town, it is pretty popular.

I do wonder how hard they were to learn to ride....you would for sure avoid falling off one if at all possible. I don't think I have ever seen anything other than a picture of one.

I never did learn how to ride one of these but my friends learned how. I did ride bicycles without inner tubes and it is hard on people who have hemorrhoids. LOL

A new way for me
Better Blog Writing