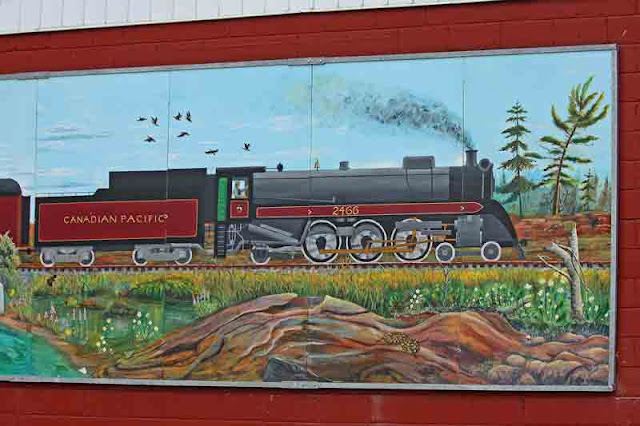 Steaming out of the past: engine 2466
This mural is on the side of a building facing a parking lot in Parry Sound, Ontario. The mural depicts the importance of the Canadian Pacific Railway (CPR) during the early half of the twentieth century when trains were pulled by steam locomotives fired with coal. Here you can see the coal car right behind the engine. 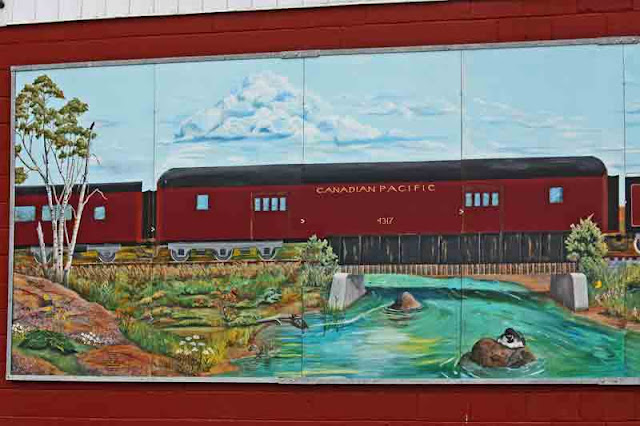 Passenger car following the coal car
CPR and the Canadian National Railway are still very important for moving cargo across Canada and into the United States, But of course they are now powered with diesel fuel. 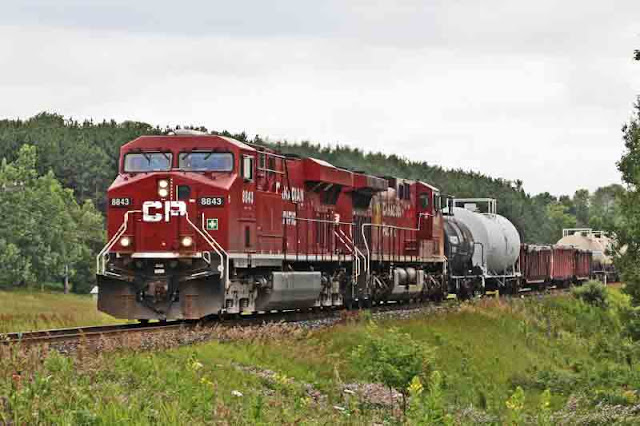 Today's CPR looks like this: engine 8643
You can see the routes CPR takes today by clicking HERE.  Parry Sound - the mural's location -  is approximately between the r and o in Toronto on the map.

Visit My World Tuesday  HERE to see tons of photos from around the world.
Posted by EG CameraGirl at 8:06 AM

I believe we are all fascinated by trains.

you know when dh is on vacation in two weeks time, we may take a drive up to Parry Sound, as we have never been before. I am guessing there is plenty to see?

This is a neat mural. I think there is something very special about steam locomotives, but I realize that diesel is more efficient.

What a terrific mural and your photos are marvelous as always! I love trains, my favorite way to travel! Hope you have a great week!

That is beautiful.Love the trains

Beautiful murals! If not for the lines of the cement walls, it would look like the real thing steaming along! That last one of the present engine, etc. is fantastic shot!

I guess it must be interesting to cross Canada by Canadian National Railway! I wonder how long it would take?

railways are such an amazing part of history. you've given me an idea for my next post:)

My happiest travel memories include a train trip across Canada. Even the sound of a train whistle brings back feelings of adventure. Thank you for sharing this beautifully painted mural.

I found this online, a description of a 17-day train trip from Halifax in the east to Vancouver in the west, with a couple of side trips added on. You can check it out here: http://www.silverclover.free-online.co.uk/transcan.html

I agree with Kathy about everyone's fascination with trains. I thought it's the romantic way to move about places. Been reading too much romance novels I guess.

Have a wonderful new work week.

Love the fiery red colors of the train! I would love to experience riding on coal operated locomotive.

The murals are beautiful and they capture the real one!

The murals are brilliant and the train is impressive. Great post! Thanks for your visit.

Interesting murals and nice to see the modern version too. Would love to cross Canada by train - one day!

What a beautiful mural and a wonderful photo. My family is fascinated with trains of any kind.

The murals are fantastic as is the actual train. Great shots of both.

Great that you showed the mural with the real thing! Both very red!

I love these colors, in the mural and the original. Creative captures!

I think the mural looks fantastic. Trains have such a magical place in history.

I love these kind of murals. Thanks for sharing .

I love the mural and the real thing!

'Have you ever seen the pistons on the giant CPR? If you have, then you know what pistons really are.'
If you recognise the quote, you will have a giggle, if you don't, you don't want to know about it!
Nice murals and I just love the olden days.

I thought it's really real, what a beautiful shot of those rail mural.

What fabulous murals... such a good copy of the original too.

Thank you for sharing these wonderful and interesting photos

Have a nice week,
Greetings, Bram

Thanks for your comment :-) Perfest photos - yeah I love this old time steamers.

This is a beautiful mural, so bright and colorful. Looks just like the train today.

Who doesn't love a train scene. Neat murals and what a beauty of a train.
Our engines here (BNSF Burlington Northern Santa Fe) are Orange or green. MB

that´s beautiful murals. And you managed to get great photos of them :)

Great photos! I love the old steam locomotive; here on Lolland we have a preserved line witch attract tourists in the summertime ;-)