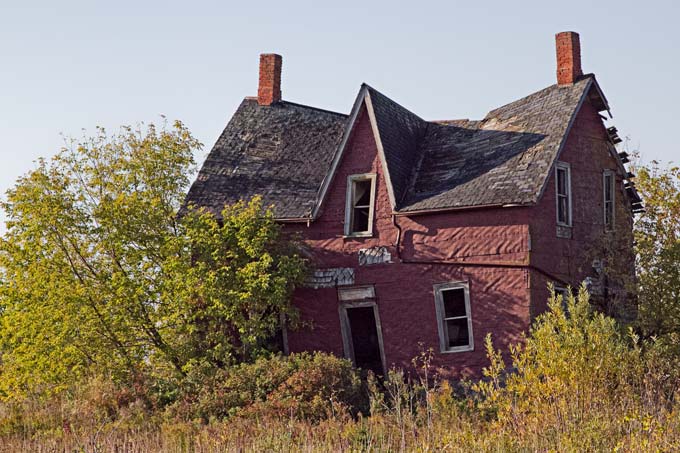 This abandoned house can be seen from a major road north of Shelburne, Ontario.  When my husband and I stopped in September to take this photo, another couple also stopped camera in hand. Apparently, they have been taking photos of this place every so many months, watching it decay. I wish I had seen this place sooner so I could have chronicled this house's demise from the beginning. 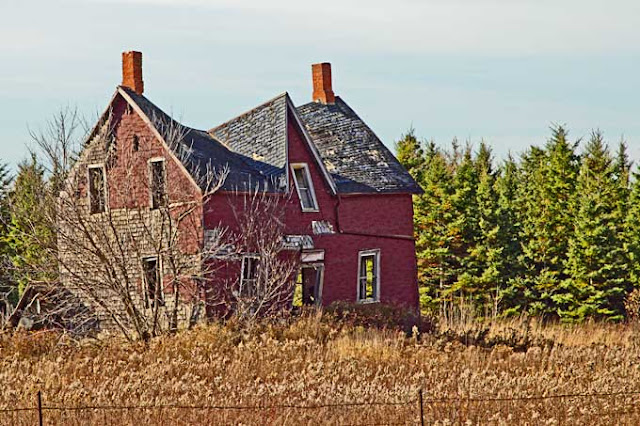 The second and third photos were taken a few weeks later.  I doubt the roof will stand up through the winter. 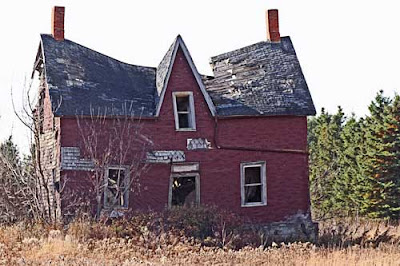 Note the missing roof to the right of the front gable.

I am  Linking to The Creative Exchange HERE.
Posted by EG CameraGirl at 6:30 AM

very sad, it looks like at one time it was a beautiful home. i like the first photo view of it, that one could be doctored in photoshop to look like something from Hansel and Gretel or a fairy tail story for childrens book.

Wondering who lived in it and for how long. Did they have happy lives? Children? Were they farmers?

Don't you hate to see this? It was once handsome and families probably had happy lives there . . .

With two chimneys I'll bet it was once a pretty nice family home.

i love this old house :)

We all seem to have the same reaction: who lived there, what were their lives like...? So many questions with no answers except the obvious, visual one. Had I been part of that house at one time in the past, I would be so sad at its current condition.

It is not likely that it will withstand a heavy snowfall.

Reminds me of the song: the crooked little man walked down a crooked little road to his crooked little house. Seriously, don't you wish you knew the history of this house, who lived there, what their story was that they abandoned this house. I'm sure its a sad story. I wounder in the current economy in the US how many homes will be walked away from.

If only the walls could talk. It's so easy to conjur up images of a family living and laughing there years ago.

These are wonderful photos. I'm toally enamored with them.

This old house is still a beautiful :)

How amazing and so very sad at the same time. I think it's amazing that you got to capture this house before it completely fell apart. Will you be going back again for more pictures? It must've been a great looking house back when it was still in good condition. I wonder what happened to the family that lived there and why the house became abandoned...

poor old thing. but at least some folks are taking notice!

What a neat building. It looks like something out of a Tim Burton movie. These make for great subject matter for an artist. I have a pen and ink drawing of a similar old house all bent out of joint. Wonderful.

Can't believe that house is for real, it just looks like someone manufactured it for a Disney film set.

This is a fantastic find! It looks like a cake that has fallen in the middle. (or maybe I just want some cake) I hope to see more of this place as it continues its journey into collapse.

If walls could talk what a story they would tell!!

All I can say is Awwwww. MB

Wow, great photos, and so sad to see such a pretty house decay like that. Homes are meant to be lived in, and have the spirit of the family in them. To bad!!!

I love this house, so much character. Too bad it has been abandoned.

It's so sad to see a house dying!I'm sure there are happy memories here, which are slowly dying too..

It's so sad to see a house dying!I'm sure there are happy memories here, which are slowly dying too..

What a great find.The first shot reminds me of a funhouse mirror, or maybe a cartoon house. I sure wouldn't get too close.

Wow - how unusual! And sad!

Ditto what everyone else said. I'd give it one more good storm!

I adore that first shot. It belongs in a frame...on a wall!

Oh that could be so cute.

It's so sad to see such once-gorgeous house to become like this.

Nice setting for a spooky movie.

Remodel anyone? No, I guess not at this point. Interesting to see it decay.

What a jewel! thank you for sharing this this morning!

What a great find, it looks so funny.

How fortunate you were to be able to photograph this! It really is a wonderful old place!

Thank you so much for sharing at The Creative Exchange.

Have a beautiful week ahead!

Hopping over from The Creative Exchange! For some reason, this reminds me of Hansel and Gretel. What lovely decrepitude!

There is a story here, I'm sure. One of dreams gone to ruin.

Gardening in a Sandbox said...

Poor old place. It is a bit sad isn't it to see these places just collapse. You captured it and that is important. V

For the last month or so, I have started a new album entitled “deserted.” We have so many homes like this here in Rockbridge County. Most are smaller, but they are about the same condition. I marvel they are lasting in spite of the weather. Your shots are great. You really make the viewer feel like she is right there with you. genie

oh my that is a very crooked and collapsing house. what a pity and a waste. Thanks for visiting my blog.

Wonderful captures. I'm glad you were able to get these before the house was totally gone.

Makes me think of Pippi Longstocking!

Great photos of the old house.

Oh my... I like old houses like this.. I always start to think who lived in the house, at the place.. You must follow it up.. see if it can stand out the winter.. and let us know! :) I can imagine it has been a beautiful house once! :)

A Garden of Threads said...

Great photo, she is still elegant in her last months.

I wonder why it is when something is not used, it goes downhill so quickly. It is almost as if things know they are not loved.

I. LOVE. IT. I wonder what it looked like before last winter... these old places last longer than you think, but you ARE in Canada, so winters there are a lot worse than here! =0

Please, ya just gotta go back in the spring & post new shots... I do the same thing w/ old abandoned places I find.

Wonderful images of this house! Imagine what it would have looked like if it had been restored. Sad to see this happen.
I look forward to seeing more of this place.

This is so interesting, never seen anything alike!
God bless you!
Cezar

I don't run a blog, but I stumbled across yours through a Google search for "collapsing house"! What gorgeous photos you take!
I tried to find a way to contact you directly as I have a bit of an odd request, but I couldn't find an email or anything. So here I go!
I'm a high school art student and one of my major assignments this year involves a painting of an old, collapsing house. Your photos of this house (which is just north of where I live) are beautiful and I was wondering if it would be alright if I painted using one of them as a source? I of course would include credit in my artist statement and it wouldn't be an exact replica, I would just like the basic form of the house and its colour scheme.
Thank you for sharing these photos, I love sitting here trying to imagine the people who once lived there.

I tried to contact you too but couldn't find an email address. :)

I'm very honoured that you like the photos and YES I am pleased to give you permission to use them.