End of an Era/Our World 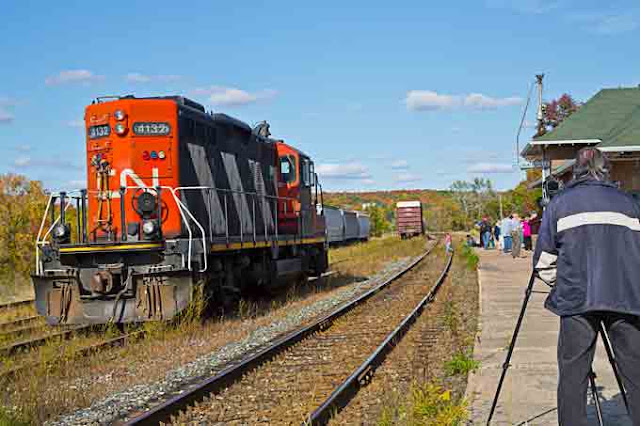 Last Friday in Huntsville, Ontario  -  a man with a camera.  What was he waiting for? 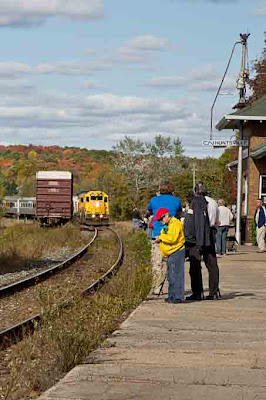 Finally, the Northlander pulled into the station

Twenty minutes late...but no one complained. It was the Northlander's last run and rail service to Ontario's north was to be replaced by motor coaches. 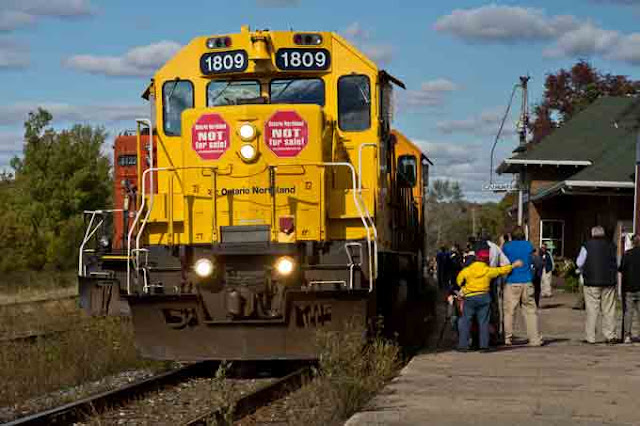 A sad group of rail fans said their last goodbyes

The red signs on the engine said Not for Sale, asking Ontarians to complain to the provincial government about the loss of rail service (and jobs) in remote communities in Ontario's north. 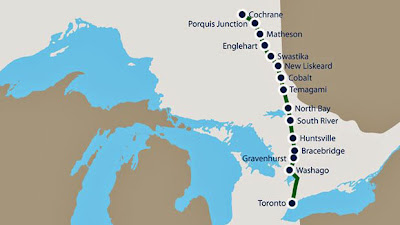 All along the route, people had mourned the loss of this service, especially in towns north of Huntsville where the service would be sorely missed. 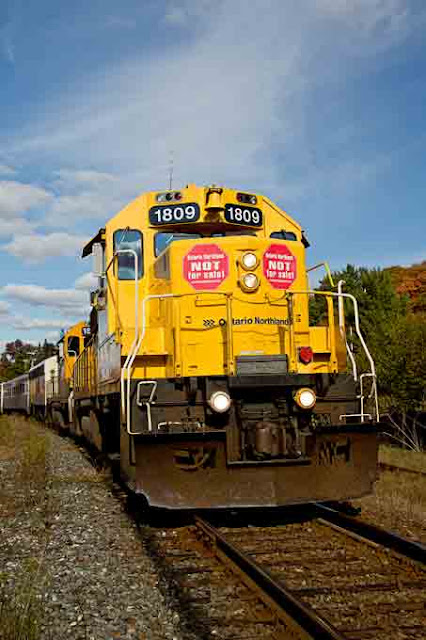 After photographers on and off the  train took tons of photos,  the train pulled out of the station one last time.

More photos from Our World can be seen by clicking HERE.
Posted by EG CameraGirl at 6:02 AM

Glad to see you got photos of the last run. It's another sad for rail road transportation.

That is sad but I'm glad you all got photos. They will be treasures!

Oh this is so sad I have always wanted to take this ride. This may be a lesson in never put off till tomorrow what you can do today. :( B

very sad, i love trains. and do not like a bus at all.

That IS sad! I love passenger trains and they are especially great for keeping remote areas alive and accessible. Railways helped build Canada from sea to sea. Now it seems the bulk of trains are the kind that deliver tons of freight with long strings of boxcars attached.

That is so sad but maybe necessary. Those old train are so beautiful.

Oh how sad, I love trains.

I can appreciate the sadness at the passing of an era. Let's hope the decisionmakers properly weighed the economic and social costs.

Loss of rail service is sad. It is a major economic loss to all the communities on the line. Our state nearly lost all rail service, but the state itself bought the line. It then became its own company which has now been sold to the CP line. They don't do passenger service, only freight, but they do move massive amounts of grain, and may move lots of coal. Fine, historic photographs.

Sad to see a loss of of a rail service. Our train on the island had stopped running altogether. It was a great way to get down to Victoria. Now is the bus service or by car.

Sad for sure, but the truth is, if people actually used it and made it economically viable, it would still be running.

Very sad but you sure got some wonderful shots!

How sad for the communities who relied on this service, not to mention a loss in the shrinking world of train travel (I love trains) - I'm glad you got to witness and document it's last run. And on a beautiful day, poignantly.

at least it was commemorated...

Very sad for your area, but beautiful shots!

A sad day. I'm glad that you caught it for us!

Oh, it is sad to see the end of train service. My spouse and I have ridden by train from Vancouver, BC to Halifax, it was a great trip. We also enjoyed an excursion train pulled by a steam locomotive from Vancouver to 100 mile house, a trip no longer offered.

What a sad loss!

It really is a sad thing losing rail service. Motor coaches just don't do it for me.

That is a shame but at least you got some great pics. It sure is a big engine isn't it?

I love trains and this was a good tribute post.

I guess it is necessary, but I do so hate to see the loss of our trains in so many areas!! I always loved to travel by train -- still do whenever I get the chance! What a great tribute indeed!

That is sad.. I've been to the station in Temagami.. Love the scenery

That's heart breaking. I feel really sad....something so special like this should be preserved forever.

I remember you WOW and your home place name just because of this WOW :)
It`s always sad when some long lived must stop and surely worth photographing.
Happy October to you!

That just makes me so sad....tears in my eyes. I love trains and they are disappearing so fast. The pictures are poignant and beautiful.

That is sad and it looks like a very nice train. I am sure it will be missed by many. Great post and photos.

Love those pictures. Trains have always kind of fascinated me and I love to see pictures of them.

That is sad when service that people count on is discontinued. But your photos of the train are excellent.

thank you for visiting my blog while I was away, I really appreciate it, it is sad to see the end of the train to the north...I think it is a loss of some of our Canadian character.

Sad, old things are getting phased out.

Sad to see the passenger trains vanish. So glad you got some photos of it's last trip.

Sad but I suppose old has to make way for the new... Beautifully captured and presented!

Wonderful photos, but I think we need more rail travel!

A nice remembrance of the service, thanks.

So sad! I love trains. In India,people don't allow any railway line to be discontinued.There would have been huge protests here.

oh my, that is sad. i bet a lot of people do not know how they will get from one place to another now. wonderful photos and thank you for sharing this story!

This is sad, true loss for many.

The train looks a little old but quite sturdy! Goodbye's may also mean "see you again."

Have a great week ahead :)

May be like here in NZ, a rich hobbyist will restore the train, and have it going again,

i don't know much about trains. i have never boarded on this kind of train before, i think. i took trains e.g. Metro when i'm abroad. maybe the Northlander would be exported here.:p

we need more trains here especially now that the traffic seems to be getting worse. i'm planning to take a long train travel when i take a vacation soon.

They are such colorful locos.

Fantastic looking train. And very sad to think it won't be travelling that route ever again.

Heartbreaking, especially for those Northlanders.

Sometimes I just hate change...but I still like your photos.