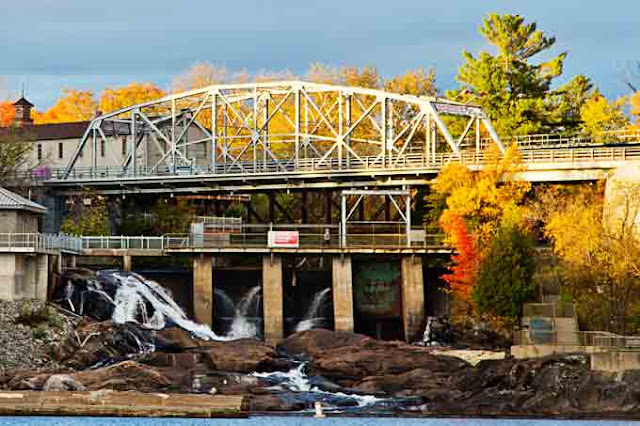 Water is overflowing the dam  and, as you can see, the colour was scrumptious there last weekend. 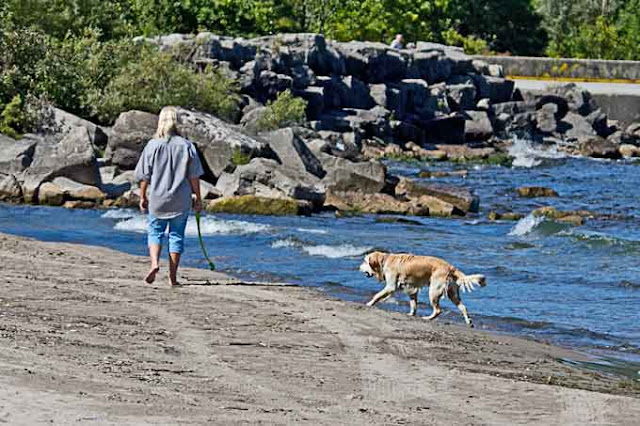 Dogs are such faithful friends! This photo was taken in September when the sand wasn't as cold as it is now for bare feet. The Wenonah II - completed in 2002 - is a replica of 20th-century steamships except that she has modern conveniences such as an elevator and air conditioning. 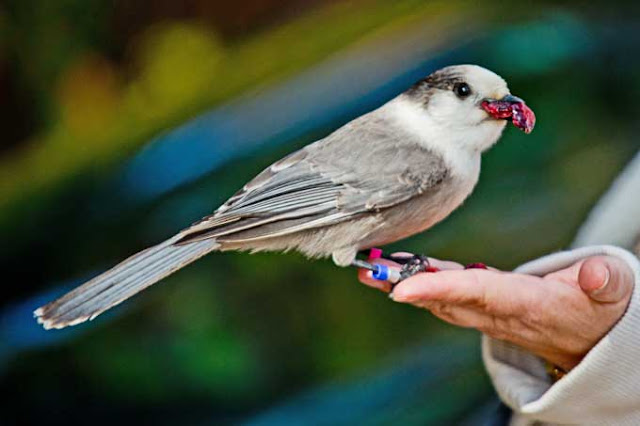 This gray jay sat on a woman's fingertips after she offered it dried cranberries. 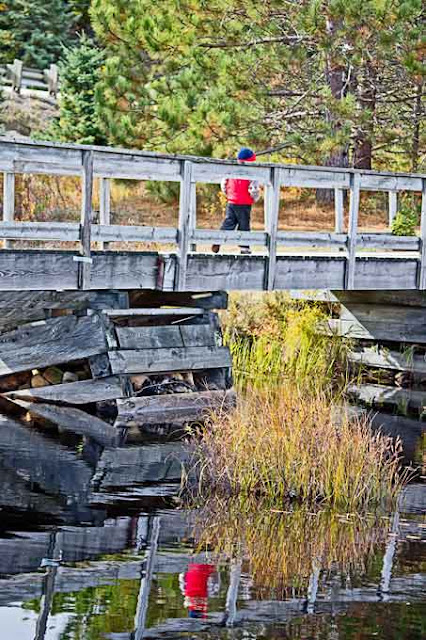 This is a section of the Spruce Bog Boardwalk in Algonquin Provincial Park. I think the reflection is fascinating.

I am linking to Ashley Sisk's Scavenger Hunt HERE
Posted by EG CameraGirl at 8:49 AM

Beautiful choices. I love the one of the dam.

Oh I just love all your photos. You make Ontario Canada beautiful:) I love the top one. B

Oh what a lovely river place. I like those waterfalls in the background, too.

A photo scavenger hunt? Too much work for me, but you get an A+.

Great photo's. The reflection in the last one is my favorite, so much texture, it took me a minute looking at it to see what was going on.

Water flowing is gorgeous! Love the nature walk, too!

How lovely, you have been to Algonquin, I have never been there.

lovely series of photos! The jay seems quite a big bird to have feeding from your hand!

A beautiful set of photos. The reflection is awesome - like seeing double.

Nice reflections on that fall walk. A dog's faithfulness is one of life's sweetest gifts. Looks like a wonderful companion.

my daughter wants to know how to feed cranberries to a bird!

A great series of fall shots. The bird on hand is very special as are all the beautiful colors!

These are all such wonderful shots that showcase fall's beauty. I do love your flowing water and then and now the most.

What a great set! I love the faithful dog and the bird and the last one too! =)

What a great idea and you did a fine job!

Great shots! Looks so lovely there.

Oh, I could drink up my fill of fall right here! Beautiful series and clearly you put effort into it, love it:)

(P.S. I love Lambertville, so cool your uncle lived there!)

Beautiful colors in the background of that bridge.

These are all wonderful. Nice finale.

Great choices for the Scavenger Hunt. The one of the dam is gorgeous.

I'm getting the grand tour of Ontario on your blog. Thank you.

Such a beautiful selection of images for SHS. I particularly love your first (the dam with lovely Autumn colours), second (faithful... there is nothing like the faithfulness of a dog) and last image (the bridge with Autumn colours and a splendid reflection). Such beauty you have shared here.

These are really great pics. I miss fall so much. It's still so hot here....and you've found yourself a bird whisperer:)

Very nice set. Loved the Water shot and the Fall Walk- Those fall colors are fabulous.