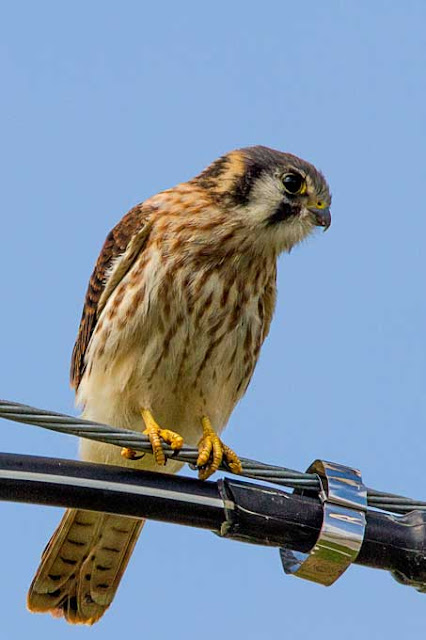 I have been watching for this small falcon in her favourite haunts since last spring when last I saw her. FINALLY on Sunday I spied her on some overhead wires with what looked to me like a young female. I guess motherhood has kept her busy.

Of course, I may have easily been passing her by mistaking her for the mourning doves that also frequent the wires from which she swoops down onto a grassy field to catch tasty morsels such as voles and grasshoppers.

Another small falcon I haven't seen for a while is... 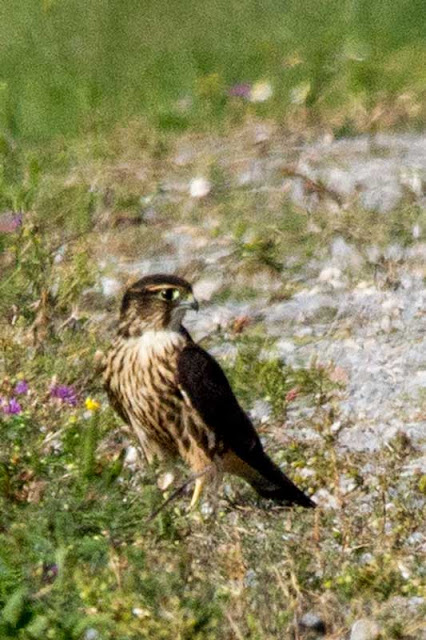 a Merlin, about the size of a pigeon so not much bigger than a Kestrel.

This is not a super shot, but  the Merlin wouldn't let me get very close. (This is a severely cropped photo.)  I saw this little falcon twice and both times it was quite uncooperative.

The first time I saw the Merlin, it attacked and nearly took down a belted kingfisher.  The frustrated Merlin flew up to a fence, then saw me and took off.  The lucky (and wise) belted kingfisher found another place to hunt for lunch.

The second time I saw the Merlin, it was hunting dragonflies and caught several.  I'm thinking dragonflies must taste crunchy like crackers or potato chips do to us. Or not.
I am connecting to Stewart M's Wild Bird Wednesday HERE
Posted by EG CameraGirl at 5:33 AM

Oh wonderful shots and I love your story. It would be so much fun to photograph all the beautiful birds you always share with us. I can never capture them as well as you can. Amazing. B

Lucky you. Great shots even if you did have to crop. There is a Kestrel I see from time to time, but he flies the second I get close enough even for a bad shot.

Lovely shots of a gorgeous bird.

that is one beautiful lady in the first photo.. we are not sure which hawk visited us this week, but the pool and the pool deck was covered in feathers of a dove, so we know he was here.

Beautiful birds. The first photo is excellent! It is difficult to 'sneak up' on birds or other animals and get those perfect shots.

What lovely photos! =) and the first one of the American Kestrel is so sharp! what a beautiful kestrel!

On the first pic, this "hunter" seems so cute!Great shots!

that kestrel photo is superb!!!

Some of these birds are most uncooperative,so even a less than perfect shot is a keeper. The Kestrel picture is amazing.

Lucky you for seeing these birds and being able to get a pic of them too! I love your bird shots, EG!

The Merlin and the Kestrel are both cool birds. Great photos and sightings.

I see the kestrel fairly often around here. Great pictures.

Oh, I so wish I could get a good shot of kestrel!

Here this summer, we have been gone on drives all day long and not seen a single hawk. We have really wondered what has happened to them.

Then the other day, I saw three! In one day!

ANY photo of a Merlin is a good one! Nice work!
The Kestrel is a beauty.

What a beautiful bird this is!

Beautiful shot of the Kestrel CG! I am lucky to see them almost daily on the wires off the road I travel to work. However they torment me by taking flight whenever I get within camera range. After months of trying, I finally got some good shots of American Kestrels in a different location. I have still not gotten a decent photo of the Merlin. They are much more scarce.

I admire your bird pictures. I am not patient enough to photograph them!

Some really love being photographed! Others... sigh!
Cheers from Cottage Country Ontario

You amaze me, EG. You can tell one bird from another?

Beautiful shots! I especially love that first one. Pretty birds!

Loved the Kestrel and it was wonderful to get any shot of the Merlin at all. Well done.

What a pair of beauties, fantastic captures!

What a gorgeous shot of the Kestrel!

I think these falcons and hawks are the hardest to capture. They never sit still. Your captures are wonderful!

It is evident that your patience paid off, you got some wonderful images of this beauty~

It is evident that your patience paid off, you got some wonderful images of this beauty~