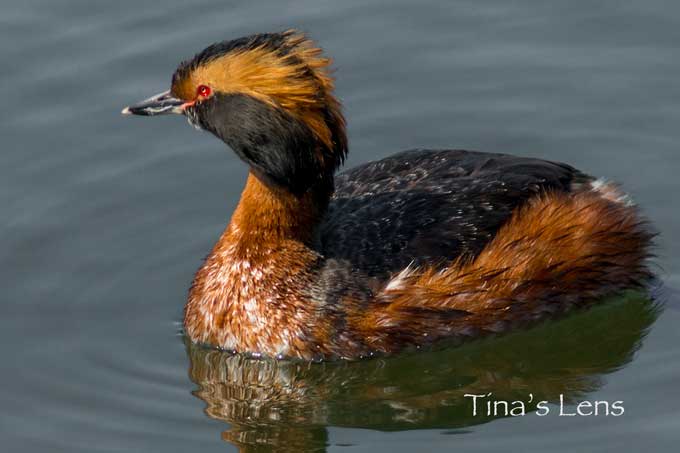 This Horned Grebe is wearing his/her breeding plumage. Actually, I think it is just finishing moulting as it still has some of his black and white non-breeding feathers hanging on/falling off in places. The Horned Grebe doesn't actually have horns. Instead it has golden feathers on its head, which it can raise or lower. In these photos the  "horns" are lowered. 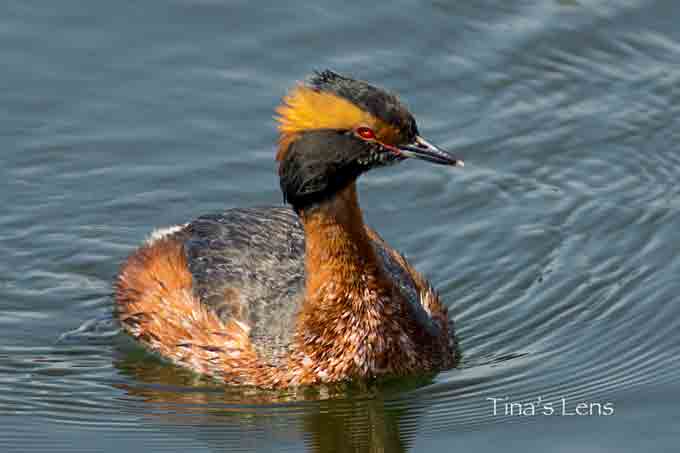 This Horned Grebe is working its way north and west but has made a stopover in a Lake Ontario harbour. 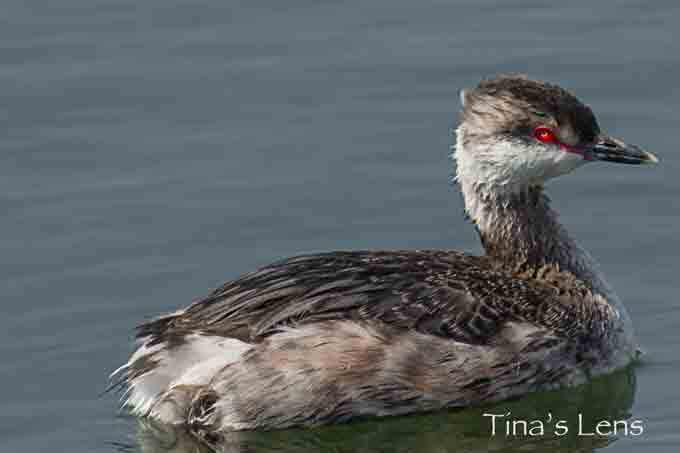 
Thank you Monica! I have changed the text!
I am connecting to Stewart M's Wild Bird Wednesday HERE
Posted by EG CameraGirl at 4:30 AM

Wonderful shots of the Horned Grebe

What a pair of beauty's!

Beautiful duck and has a beautiful gold "horns". Regards.

Neat bird or whatever.

I love the grebes. Beautiful shots! have a great day!

The male has awesome colours.

Such a difference in colours, it's quite often the way with birds, the males are more colourful.. Wonderful shots EG.

Wow, it continues to amaze me how diverse the bird species are. Nice shot.

Glad you showed both the male and female. I like to see the difference. Like his golden horn feathers.

We call that a Slavonian grebe but we see them very infrequently. That's a pity because as you've shown they are spectacular birds.

Boy, you sure get some spectacular bird pictures!

they are both beautiful, and if i were she, i would go after him in a heart beat.

how could she resist him...with those colors, markings and all the little feathery horns!!
GREAT shots!!

He's so handsome!! That's a new bird for me, very nice.

Beautiful colors on the male!

You do indeed get awesome pictures and so many of "critters" I've never seen before!! I love them! Thanks so much, as always, for sharing!! Hope your week is off to a great start!!

You always take great photos of the birds you see!

They are beautiful birds!

Such beauty and grace!

The first thing I noticed was their very red eyes. I think 'she' has good taste. He is pretty cute - beautifully colored.

Such beautiful birds! Their eyes are impressive...

I'm impressed with his colours too, EG! Great shots!

Wow, beautiful! The red eyes are kinda creepy though.

Mr. Horned Grebe is certainly a handsome fellow. I wonder if he won the lady's heart.

I was looking up these guys on Wikipedia a few days ago, but yours pictures are much, much better!

I saw a group of Horned Grebes once on our lake a few years back. I am pretty sure they were blown off course during their migration because they have never returned. I could only make out the males because of the distance but there may well have been females with them. They are so striking and beautiful with their colors and red eyes. Beautiful photos EGC ...

Andrea @ From The Sol

I would have been very surprised indeed if a bird had horns, lol!

These are cute. My first thought was 'where's the hairdryer"!

Grebes are my favorite! So cute. Beautiful shots of these lil darlings.

You have some interesting ducks in your neck of the woods! :)

They are a beautiful pair!

Lovely pictures, you have such patience...

The male sure is colorful.

He is quite a good looking fella.

a new bird to me. Thanks so much

If you only knew how much I'd love to see one in the breeding plumage! I've seen them in their non-breeding form only. Beautiful pics!

I love how all the birds pose for you. :)

It hardly seems fair. He is quite magnificent, she a little dull. A discrete lady huh?

I don´t think that is a female. Where I live the male and female are alike. The latter one is an adult with winter plumage. No tell male of female.

What a beauty he is!