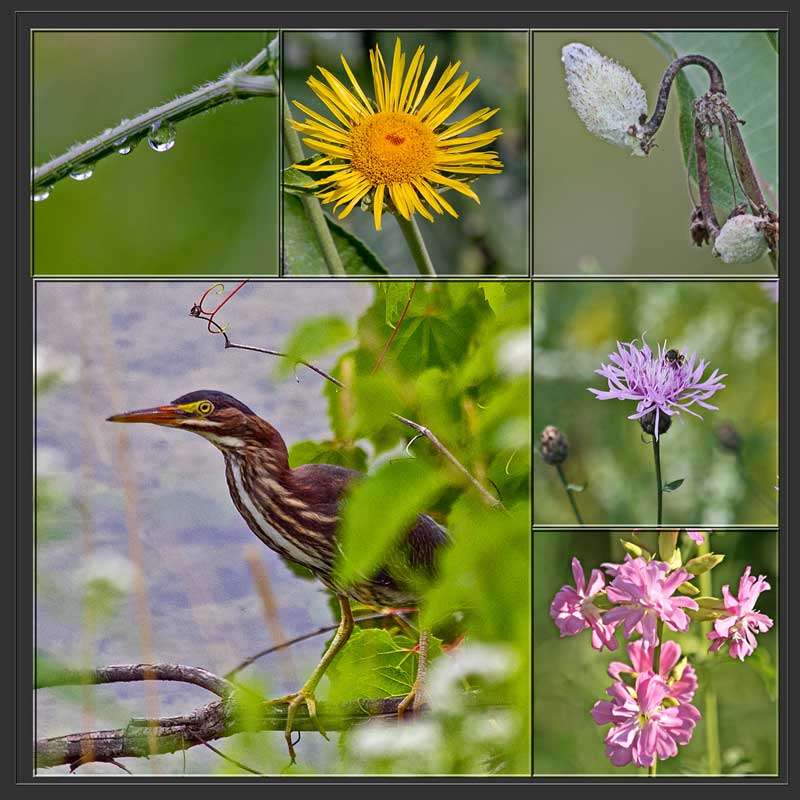 
All of thee photos were taken near water in East Gwillimbury.

Largest square: This has been an exciting week for me because I had heard there were green herons in our area BUT I had never seen any. Last week we became aware of a pair in a pond very near us!  How long thay have been there I don't actually know as they are very well campuflaged. Now that I KNOW they are there, though, I can spot them if I watch carefully for movement. They are stalkers being stalked.

This guy or gal was standing very still on the edge of dense foliage watching for fish or frogs. I had seen it fly down from the lower branches of a birch tree on the edge of the pond but I spent many minutes trying to find where it was hiding. Aha! Walking around the pond a way  I saw its reflection so I silently crept back to see if I could get closer. He/she saw me...but I snapped this photo before he flew to other side of the pond.

Moving clockwise: water droplets! The clouds have finally let loose of some water and our drought is ended.  Next: Elecampane (Inula helenium) - a sunflower-like flower; common milkweed pods (Aesclepias syriaca) starting to mature; spotted knapweed (Centurea biebersteinii) - considered a noxious weed in many places across Canada (one plant can produce as many as 20,000 seeds!);  and bouncing Bet (Saponaria officinalis) - a cup of leaves whirled in a blender with two cups of water is said to make a fine soap for washing dishes or fine lingerie (don't take my word for it, though, as I just happened to read that somewhere).

Please note that I include the botanical names because they remain the same around the world but the common names vary.

Posted by EG CameraGirl at 7:12 AM

How lucky to see this beautiful bird. And you caught him/her perfectly! :)

Wow, you capture the most beautiful images.. the flowers are gorgeous.. I love the heron watching you shot him.

Love your story about the green heron.

I have only seen the little green heron twice. once down at the marina, fishing from the ropes, and once out at the beach. they live here but are hard to find. your photo captured his beauty and the beauty of what he was hiding in

Have never heard of a Green Heron but it looks similar to some Aussie herons. Looks like you are really enjoying your summer. Great shots.

Green herons? Never heard of them! Great photo of him and as always I love, love your collage! Keep 'em comin'!

Lovely collage! Thanks for identifying the subjects of your photos, I enjoy learning new plants!

Knapweed is a noxious weed here. The bees love it, but it takes over rapidly, emits a chemical which discourages other plants from growing, and livestock (except goats) won't eat it. We finally had to spray to get a handle on it.

That Green Heron! I can feel the excitement coming through when you talk about it. Great capture.

Is the bouncing Bet a type of campion?
Good picture of the heron, I have never seen one around our reservior area, although we do have the larger herons.

As always, your images are incredibly beautiful.

So much nature beauty. I love all of the images. Have a great day!

Excellent quality. Not familiar with that bird. Love the drops of water. http://looseleafnotes.com

great shot of the green!

I always though herons had very long legs. This is a handsome specimen.

beautiful bits of nature today--hope you have a nice day.

You are really sneaky! And thank goodness. I don't think we have those here and even if we did I don't think I have the same ability as you do to silently creep and snap a photo at the same time!

Terrific photo - so nice and sharp.

Capturing that Heron shot is a great accomplishment.Love the droplets on the branch.

These are all wonderful shots from your part of the world. My favorite is the heron. What a fantastic bird.

Congratulations on getting the Green Heron -- it's a great picture. I like those water drops as well.

Fabulous heron! As always, your Nature Notes montage is beautiful and informative, EG.

The green heron is very striking - a beautiful bird!

what a lovely collage, the heron looks as though it were posing specially to have its photo taken, what a striking bird!

Learned more today..aren't the green herons great and they have the most cranky kind of call. I usually hear them before I see them....