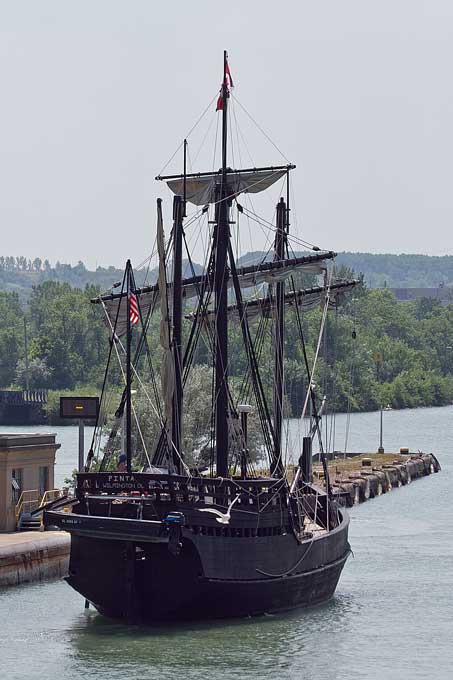 Remember your history? The Pinta was one of the three ships that sailed in 1492 with Christopher Columbus across the Atlantic in search of a shorter route from Spain to India - shorter, that is, than around the Cape of Good Hope.

Of the three famous ships, the Pinta was the fastest.  On a typical day, depending on the wind, the Pinta could sail 90 to 100 miles.

This replica is operated by the Christopher Columbus Foundation based in the Virgin Islands.  It was built to accompany the Nina, said to be the most historically accurate replica
... 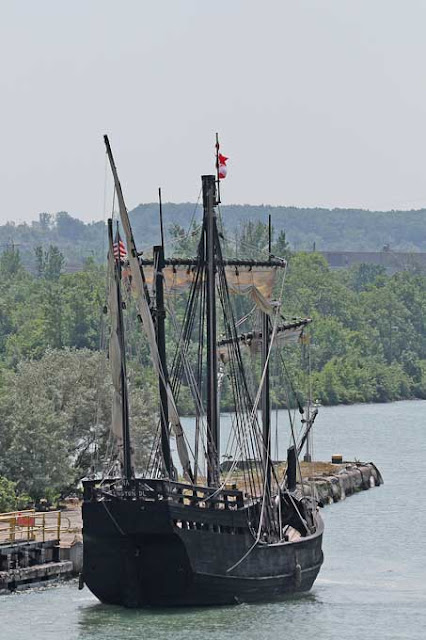 Nina leaving the same lock as above

of the ship by the same name that sailed with Columbus. The new Nina - built in 1992 celebrating 500 years since the famous trip - is a floating museum.

The Nina and Pinta sail to ports all over the Western Hemisphere,  and this summer they are visiting fresh-water ports on the Great Lakes, then down the Mississippi River and out into the Gulf of Mexico. 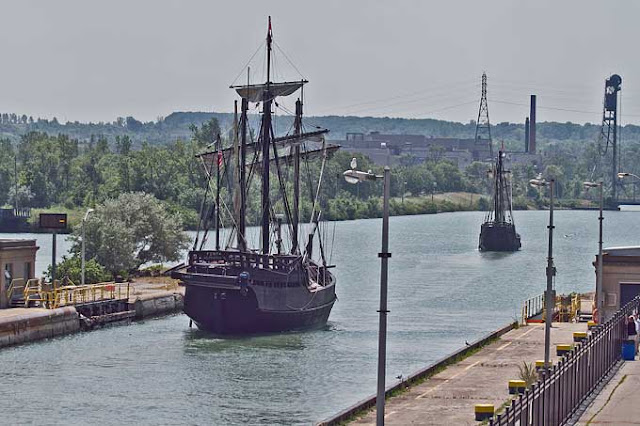 Each ship is crewed by six or seven people.  The ships travel 11 months of the year with only one month in dry dock for repairs.

Alas! There was no Santa Maria traveling through the Welland Canal...at least not the day I was there.


I am linking to My World.

Posted by EG CameraGirl at 7:10 AM

So interesting. They look so small for ships that sailed the world.

What a fabulous slice of history. I want the job of being on one of those ships. Can you imagine that experience? Pure adventure. Thanks for sharing.

back in the 60's they had Nina and Pinta just like these at Charlestown in Charleston SC. it was a place like a zoo where the animals were free in large fenced areas and the two ships were tied up as museums and we were allowed to board them. they are tiny little ships and i can not imagine crossing the ocean in one of them

Glad you caught these. Must be a fun journey for the crews.

That would be really neat to see!

These are great photos and I do remember my history lessons about Columbus. In fact, most of our problems today are cause from the lack immigration policies of the North American natives.

This is such an exquisite ship. I can almost hear the creaking of the wood and the water slapping against the bow as the vessel dares to travel strange and dangerous territories. These were our space travelers of old. Thanks for sharing this important piece of our history. :)

Thanks for the great pictures and interesting information. I would love to see these vessels in person -- they are beautiful ships.

Nice ship and pictures! I'm longing for a ship, to go out on the sea and ocean.. :))

A slice of history sailing the seas! Lovely.

This is interesting. Great capture of the beauty.

Wouldn't it be fun to be one of the people manning one of them?! I saw one in Corpus once, thought it was there all the time, did no realize the way it worked. :)

love learning history outside of the classroom. i wonder if these floating replicas would stop by california.

I too was struck at how small the two ships were. I had always imagine them as quite large sailing vessels with lots of deckmates.

Crossing the Atlantic in this?
They were brave people.
Am I missing something? Is there no MyWorld this week?
[tw3.me]

I think these are interesting, but I don't really understand who funds them to travel around, or why.

Such an interesting post. I love old ships and the replicas have that romance too.

You mentioned not having the balance to walk across the pipe in mine. I don't either and the funny thing is my guess is the man was in his 70s. I walked behind him before the pipe for a while and thought, gosh he's considerably older than I am and much faster. I couldn't believe it when he started walking across the pipe, quite fast too. Put me to shame.

I love replica ships ... sailing ships ... amazing that they stayed upright! The sailors really had a job. Wonderful shots.

Fascinating, they look so much smaller than I imagined. Thanks for these.

What a fabulous capture! You are a font of info!

Fantastic! I would love to be able to see -- and better yet, sail on one of them! What terrific captures, EG! And thanks, too, for the fascinating information! Enjoy your week!

Wonderful captures of these old ships - with so much history!

I love old ships, and it is so much fun to watch them. There is one in Erie, Penna a replica of the Brig Niagara that won the battle of Lake Erie during the war of 1812. I have lots of pictures of it.
About those Sulphur butterflies, being at the right place at the right time I guess. They are really hard to get I think, but this one was very interested in eating..so it stayed for a few seconds.
B.

How do you know this stuff? Seriously, you have such eclectic connections.

I taught American history and did a unit on Columbus and his expeditions...I remember the first time I saw these replicas I was struck by the fact they seemed so small.

What an interesting way to learn history--to see "sort of" the real thing. Hard to believe they "sailed the seven seas" in those little ships--what brave men! Mickie :)

That would be great to see in person.

I learned the history, loooong ago, so thanks for the reminder together with the great photos. It’s nice for the reconstructed ships to work actively from port to port. In my country, a ship, which carried Japanese envoy to Tang Dynasty China in the 8th century, was reconstructed in collaboration with China and sailed for Shanghai Exhibition. Enjoy your week.

Was this for Canal Days? I almost went, but in the end was too hot... I loved the tall ships when they were here last summer.

How lovely! Nice to see those tall ships! We have one festival coming up in October.

You captured them well!

i imagine pirates!:p
a beautiful replica, she's tall and elegant.

How could one forget these 3 ships? Always nice to see replicas of them!

I am an American man, and I have decided to boycott American women. In a nutshell, American women are the most likely to cheat on you, to divorce you, to get fat, to steal half of your money in the divorce courts, don’t know how to cook or clean, don’t want to have children, etc. Therefore, what intelligent man would want to get involved with American women?

American women are generally immature, selfish, extremely arrogant and self-centered, mentally unstable, irresponsible, and highly unchaste. The behavior of most American women is utterly disgusting, to say the least.

Hi there - seeing replicas like this makes you wonder how people did what they did. These days I dont walk down the street without gadgets they the ship sailors could only have thought were magical!

I am amazed that these ships have such small crews. It must take several people to raise the sails! They are beautiful, though.

When I saw NIna and Pinta, I was looking forward to the Santa Maria as well. A pity not to see her. Just imagine sailing around the world in a little ship like that, especially if you believed the earth was flat. You would be expecting to fall over the edge any minute!

They look so small and fragile!

I can't believe explorers sailed these ships all over the world. Love replicas of these ships - really helps one realize what adventurers did.

Wow! Wonderful shots and boats!
Thanks for sharing;o)

These ships are wonderful...what a treat for you to capture them coming through the locks! I very much enjoyed the Welland Canal on the few occasions I got to visit...:)