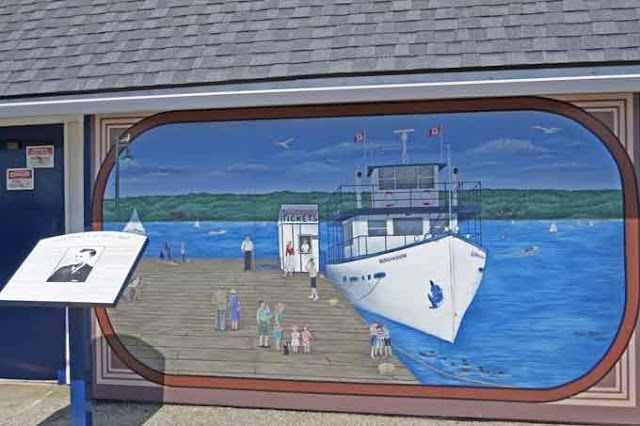 Mural on the dock at Penetanguishene on southern Georgian Bay

This mural advertises the cruise ship that docks on the far end of the dock. I've seen this mural before but a few weeks ago... 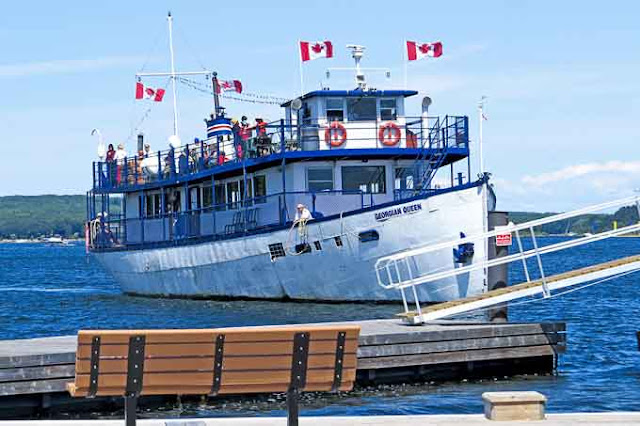 Returning to the dock

I actually got to see the actual cruise ship.

At first I thought I'd missed the Georgian Queen again, but as I walked along the quay to take photos of sailboats in the harbour. I looked up and happily realized the ship was motoring up to the dock. 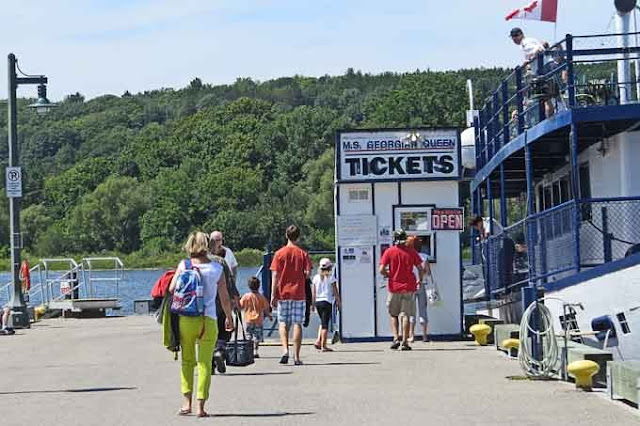 Lining up for tickets

The passengers disembarked and - before I knew it - a new wave of passengers started  to purchase tickets for the next departure. While I doubt that the  number of people who  wanted to take the next cruise reached the maximum possible (200), I was amazed at the constant stream of  tourists forking over the money to take the 1-and -1/2-hour trip offered. 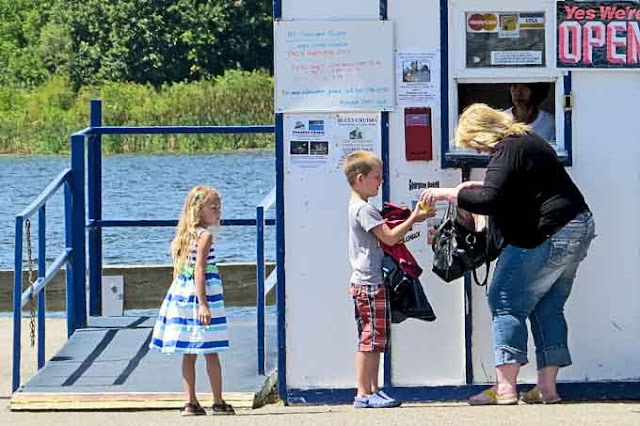 This mother and two kids arrived rather late and I worried that she might not be able to find her credit card at the bottom of her bag. But hey! She did find a tennis ball. Eventually they did board the boat. 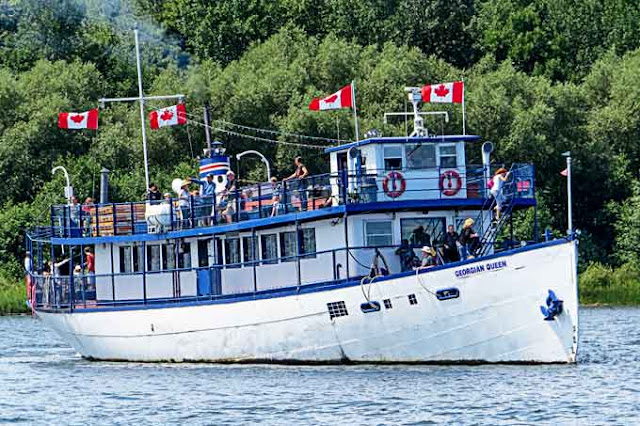 On its way out of the harbour

More photos from Our World can be seen by clicking HERE.
Posted by EG CameraGirl at 5:30 AM

Amazing what sometimes finds its way into women's purses. :-) Tennis anyone?

Wonderful little snippets out of life. And no wonder that woman has a tennis ball in her bag, with two kids along side her! Where does the boat go to?

Amazing shots I think I would take a tour on that ship, boats make me a little nervous but the views would be worth it. B

These tours are a great way to see the country and the commentary explains the history of the area.

I'd sign up for a cruise on that boat.

Looks like great fun! I love those small excursion boats. You get to see the lake and surroundings from an entirely new perspective. I'm assuming you just took these wonderful pictures but not a ride on the Georgian Queen, so you'd better fork up the cash and try it. The world awaits your photos! :)

that mural is great, it looks like it is a real boat. and i can tell it was a beautiful day because of the clarity of the photos

Great pictures. That would be a fun tour.

Nice mural, how fun to compare with the actual. The looking for cash picture is priceless. :)

The tennis ball is funny. That is why I carry a small purse! It is easy to find stuff and you can't carry any junk!

neat to see the mural come to life!

Love the mural and then to see the real thing---wonderful. MB

I thoroughly enjoyed that little story and the lovely photos too!

Wonderful photos, but the tennis ball made me lol.

How nice to be able to take a brief cruise on a quaint ship that is NOT bigger than a Los Vegas hotel.

I love the views of the actual cruise ship along with the cool mural!

Good shots and narrative. There's never any telling what's in my purse.

Cruises are fun!! Boom & Gary of the Vermilon River, Canada.

Such a fun post and I love your captures for the day as well as your narrative! You have a great sense of humor!! Hope you have a wonderful week!

i'd love to take that cruise.

How neat to have the mural and the boat in one post -- I quit carrying a purse when I retired from work. :)

Wow, Fun outing. I love those types of outings where everyone is smiling and thrilled. Thanks for the visit and I think I am managing to make several blogger jealous regarding my bomber. Oh well, that's ok, right? LOL

Wonderful shots! That boat looks like a good spot to enjoy travelling on the water.

What a wonderful outing and great shots.

I would hate to think someone might take a shot of me as I delve into my bag usually looking for keys. I'll have to be more discreet from now on.

I would certainly pay to do that cruise. It must be beautiful!

Very nice photos and narrative!
That boat looks very old and I'm sure there is a lot of history associated with it.

This looks like a fun cruise on a boat that is old school and kinda charming.

Nice shots, i love the ambiance cruise, and port.