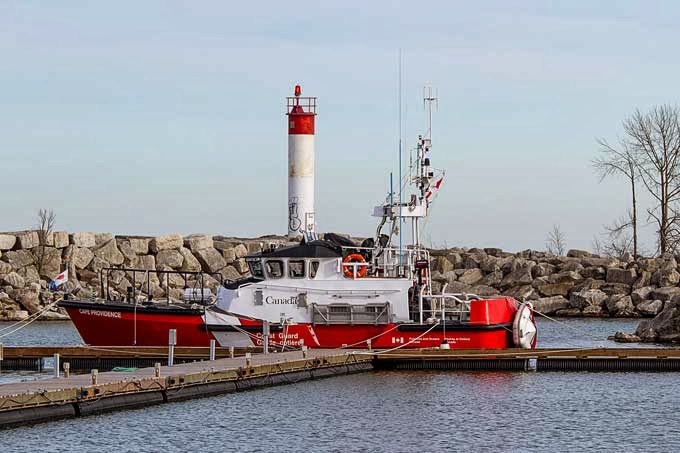 In January, the Canadian Coast Guard (CCG) will be 62 years old. In addition to operating in the Atlantic, Pacific and Arctic Oceans, CCG also has stations on the Great Lakes and St. Lawrence River. It's responsible for the longest coastline in the world - 202,080-kilometres (125,570 miles) long. Visit HERE to see a map of Canada's coastline.

The Meaford and Cobourg stations (as well as seven others on the Great Lakes) are staffed 24/7  from late April through early December.  Crew members perform two main duties:
1.) search and rescue
2.) initial response to marine pollution incidents

The CCG is a civilian organization. The Royal Canadian Mounted Police is responsible for any needed enforcement. 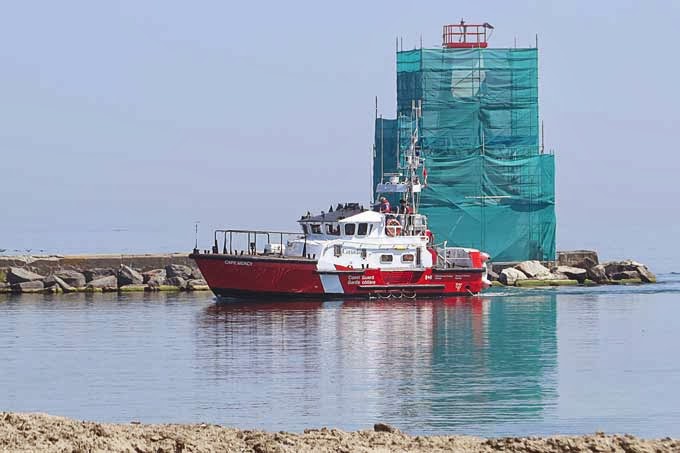 
The stations are closed throughout the winter months because CCG boats are designed for use on open water.  Icebreakers and/or aircraft are used in winter.

Although there has been a search and rescue station at Cobourg (on Lake Ontario) since 1882, it was not known as the Canadian Coast Guard till 1962.

FYI: The lighthouse is surrounded by green because it was being repainted last summer.
More photos from Our World can be seen by clicking HERE.
Posted by EG CameraGirl at 5:52 AM

I've seen the Coast Guard's boats before and now thanks to you I know more about their history.

That is a lot of coastline to look after. They do a great job.

They look so ready to go. The coast guard does an important job.

Oh I always love seeing the Coast Guard ship sitting and waiting it makes me proud to know it is there waiting in case it is needed. Great shots. Hug B

Wonderful organization; Coast Guards have done some amazing rescues throughout the world. Your pictures are so clear!

Well I learned something today. Canada does have a long coastline to patrol. All those Americans trying to escape the Obamacare and all.

That is a lot of mileage for a 62-year old. :) Somehow reassuring to know this life-saving organization has existed over a long period of time and understands very well the growing challenges we face environmentally and otherwise!

Nice pictures. I didn't know Meaford had a coast guard station. I'll have to watch for them.

I had no idea your coast line was that long. that first shot is really good and with that paint job these should be easy to see in rough seas.. from the time i was 8 until about 15 i wanted to marry a Royal Canadian Mounted policeman. i loved all things western and those uniforms sitting on a horse just grabbed my heart... i used to avidly read stories about them.

I love the repeated red colour in the first photo, nice composition.

That first shot is so vibrant. One will not miss that boat coming in to rescue. :)

Love these pictures. Very impressive and they do such important work.

That's a lot of area to cover!

Great capture. That is certainly a scene that is not a part of my world.

A good post, EG! These people do a great job!

I love any images with a light house in it!

Those cutter ships - Look so happy - don't they?

I know how happy I'd be to see one if i were in distress -
But, it looks happy just to see it . .

A lot of coastline indeed! Love the red boats. Great shots for the day and they are terrific as always, EG! Have a great week!

a nice post. i don't really have a clear image of what coast guard do.

The original coastguards in the UK were only there to guard against smuggling - looking out for shipwrecks was a minor sideline. The lifeboat service had to be set up to deal with search and rescue.

Nice shots- thanks for the history too.

I like the red/white color combo in these photos. The Coast Guard really has a tough job.

I love the way these coast guard ships look and they do such important work. Interesting post.

They are impressive ships!

The Coast Guard has a huge job and lots of coast line to cover! I didn't know that it was that long. Very interesting post!

The top shot is perfect!

Wow, that's a lot of coastline to patrol. Interesting facts!

Such an important but dangerous job.

Informative and beautiful. Thank you for sharing :)