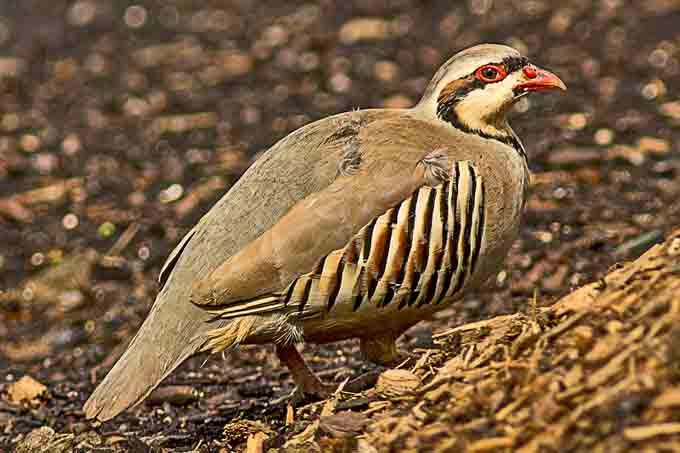 Although this bird is native to southern Eurasia, a feral population now exists in North America, some of which reside in south central Ontario. It's a gamebird, a member of the pheasant family. 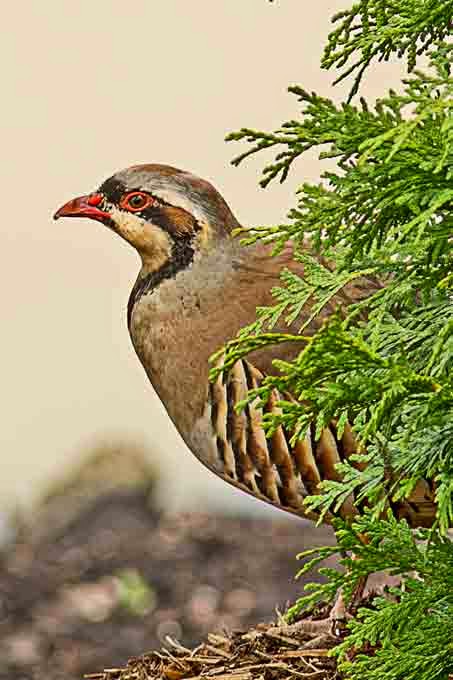 Supposedly they prefer arid, rocky terrain, but two or more were hanging around a brand-new holding pond in a subdivision near us that's under construction. 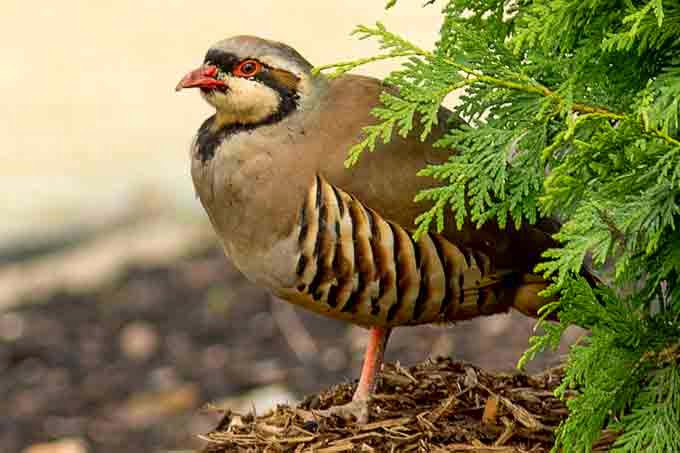 Chukar edging its way out

Apparently they are quite hardy and can survive winters much further north than where I live an hour north of Toronto.

When I looked them up on the Cornell Lab of Ornithology site, I saw on their map that these partridges are well established in the western U.S and in southern parts of Canadian  Province of British Columbia. I think they are finding it quite pleasant here north of Toronto as well.

I am connecting to Stewart M's Wild Bird Wednesday HERE

Posted by EG CameraGirl at 5:00 AM

They are very similar to the Red-Legged Partridge which has established itself over here. Attractive birds, far to pretty to shoot.

I've never seen one of these birds.

This bird is beautiful! Great shots!

We do have pear trees here in East Texas but unfortunately no partridges to go in them.

Nice photos of an interesting bird. I wonder how they first arrived in N America?

the painted face is my favorite part of this beautiful bird.. it looks like someone colored it with markers.. the second shot would make a beautiful card..

Wonderful shots. You really managed to get close, and pull us in as well.

It is pretty. I've never heard of that kind of bird before.

really beautiful! i think i saw a similar partridge featured on an aussie or new zealand blog last week. :)

What a pretty bird. I like the markings. MB

Great shots of a beautiful bird.

It is a beautiful bird. We see Chukars for sale on our way to Springfield, Missouri which is in the southwest part of the state.

Your pictures of birds never stop amazing me! I am still waiting for you to publish your own bird book!

Interesting bird facts. This bird looks "stately" to me.

Considering we are already in winter here, I'm now singing "and a partridge in a pear tree...". Thanks a lot! :-)
Lovely photos of a pretty bird!

You are SO lucky!!!!! Jealous and great bird! Thanks for the info on these birds.

Interesting bird, and nice photos of it.

A pretty bird. Not easy to spot with the earthy colours.

Your photos are amazing!!! These kind of birds are very shy, I don't know how you did it!! He looks like he is posing. I have never seen one quite like this, beautiful!

Their beauty shines...and by the face, they must have an exceptional personality!!

They have beautiful markings on them.

Great close ups. It's similar to our Red legged partridge here in the UK.

A cool bird and a great sighting..Awesome shots.

Such a neat bird, and great shots! I would be thrilled to catch a sight of him, never having seen one before.

They are a beautiful bird...need to look them up to see size.

What a beautiful bird this is!!

He looks rather serious.

Such a pretty bird and, as you say, quite hardy. As long as it is not displacing native species it seems like a good immigrant.

Beautiful bird, I really like the striped plumage on the side.

What a lovely bird! I will have to look them up because I am so curious as to when & how they came to N. America. Great post!

How wonderful to have seen this beautiful Partridge and your images are fantastic!

unusual to see a bird like that. Love it. Thanks for sharing.

The Chukar is so lovely.
Wonderful pictures you have taken!
Specially the last one.

Such clarity - I can count the feathers! We have grouse but I haven't seen this partridge.

That is a beautiful bird! So exotic looking. Your images are awesome! I wish I was up north with them to escape this horrid heat.

It's a nice looking bird. I guess they haven't made it out here yet. Nice pics!

Your bird knowledge is remarkable, EG, as is your bird photography.