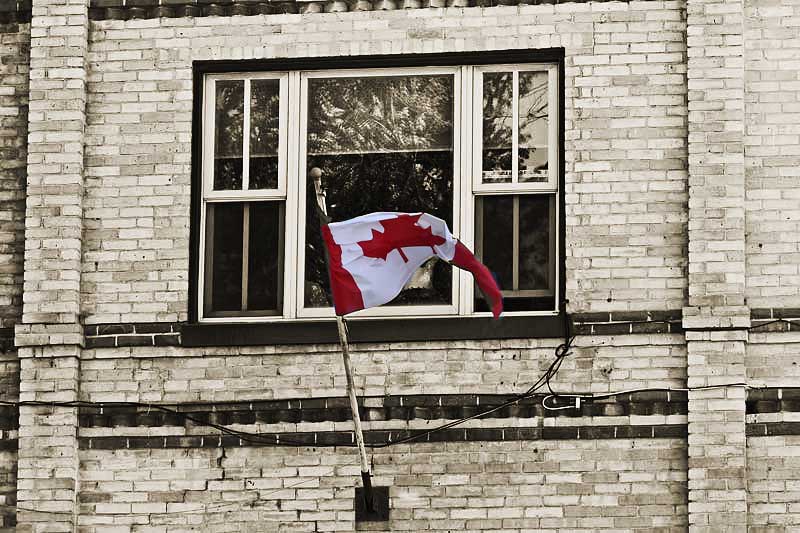 More Trivia: Three of the above provinces and two of the territories were once part of the Northwest Territories (Manitoba, Yukon, Alberta, Saskatchewan and Nunavut,) so most of Canada's land mass has been a part of confederation since 1870. British Columbia joined a year later and Newfoundland  60 years after that.

To view other Sepia Scenes visit MaryT, theTeach at http://sepiascenes.blogspot.com
Posted by EG CameraGirl at 11:15 AM

EG, Happy Canada Day to you! Your photo is exquisite! Come visit me at Work of the Poet for a heartfelt greeting from us in the U.S.!

As a neighbor to the south, Happy Birthday Canada!

Happy Canada Day, I love how the flag retains its red and white color.

Happy birthday! I love the place names. They evoke such a blend of here and Europe.

I shall reiterate, 'Happy Birthday'!

The photo is superb. Just very well done! Kudos to you!

Happy Canada Day! Great choice with the flag - one of most recognizable world flags. Building in sepia makes the atmosphere formal - perfect for national holiday!

Congratulations with the day - and for all the information that accompanied your post. I have been to Canada, but this I didn't know :-)

PS Thank you for the comments!

Happy Birthday, Canada! Love your picture. Canada's flag is one of my favorites. Love that maple leaf motif.

A very Happy Canada day to you!
This image is perfect with the flag highlighted in color on the sepia background. Well done!

Happy Birthday Canada and to all Canadians.
My big sis is Canadian. She lived many years in Lethbridge (actually Coaldale) Alberta where my brother in law was a doctor and a farmer and when his father died they moved back to Kelowna B.C. where he was raised on an apple orchard farm.

Happy Birthday to a wonderful neighbor and friend, the beautiful confederation of provinces and territories. The longest undefended border in the world, this has not nor will ever be duplicated.

We in the USA should (like all Canadian citizens do)- stand on guard for thee!

I like the flag in the sepia picture. Thanks for the information about Canada's growth. Happy Canada Day!

Happy Anniversary Canada! I am only 1 hour from the border and I have noted Canadians are pouring in for a holiday! Fun.

Happy Canada Day!!! Such a stunningly beautiful place.
Love the picture too.

Happy Birthday Canada from all of us in the USA, and you've done a wonderful post EG.
B.

A very happy birthday Canada from way way down south in Victoria, Australia!

Loved your world when I visited Saskatchewan some years ago in Autumn!

I'm sending a slice of "cyber-cake" your way. Happy Birthday Canada from your slightly older brother to the South!

Happy day to you a day after :)
Great post EG!

You know, I had a vague recollection of when Canada Day was, but I didn't realize the country was so much younger than the US.

It sure is beautiful, young or old.

Canada never gets over shadowed by the other countries day coming up. Very informative post and a belated Happy Canada Day.

Happy Belated Canada Day! Love how you set up the photo. Thanks for the history.

Very lovely with just the colors of red and white on this sepia to highlight the Canadian Flag :)

I love the photo! I like your treatment! Happy late birthday to Canada!

Sorry I missed your special day but I do hope you had a great celebration. Ours is today, July 4th. I have always loved the design of your flag. Today was our birthday in the US and I love this special celebration time. . .