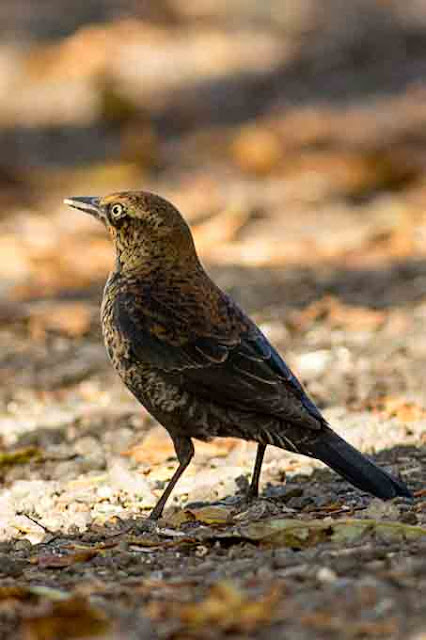 Rusty blackbirds are headed south  for the southeastern U.S. but along the way a few stopped into one of my favourite  birding spots to refuel. It's a treat to see them as they have been suffering from a population decline. Now they are dressed in their winter plumage and - truth be told - I don't believe I would recognize them in their breeding finery,  Maybe I would notice their lovely yellow eyes, though. 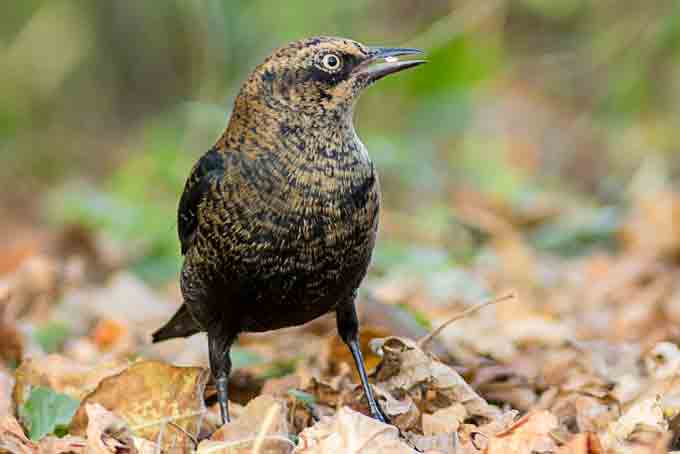 A large percentage of them (some say 75%) spend summer in Canada's boreal forests. They are considered a keystone species because they build sturdy nests anew each year, so sturdy that other birds such as the Solitary Sandpiper have been known to use their abandoned nests the next year.
I am connecting to Stewart M's Wild Bird Wednesday HERE
Posted by EG CameraGirl at 2:05 PM

As I have said before, you do know your birds and flowers. But ... you probably want to correct the typo in your title. :)

Great find and photos, Tina!
Love the antique finish on the birds ...
Have a Beautiful Day!
Peace :)

I regret I never saw a Rusty Blackbird in two visits to Ontario, Canada. Interesting that your birders like NW winds in the autumn. Our NW winds blow off the Irish Sea where there is water. Your NW winds blow from inland where many birds reside?

I always love your birds and critters -- well, let's face it, I love your blog and your photos and look forward to them every day!! I hope you're having good weather, it's very mild for this time of year here in Portland, but it is GRAY and gloomy!! Hope your week is off to a great start!! Enjoy!!

I always love your birds too....

Great photos - I like your name for the birds - "rusty blackbirds" - that is perfect for their off-season plumage.

What a special bird that is

They really are pretty!

They are certainly beautiful on their fall colors.

I look forward to seeing them down our way :O)

Thank you very much for this introduction to a new and lovely bird!

Now they have one more fan wishing them well. . . .

A beautiful bird, and so often unless it's very common to me do I ever know their real name! Thanks for sharing.

Beautiful captures of these birds. I like the touches of 'gold' in their feathers.

You've captured this little guy perfectly. But a name change might be considered: How about Rustybirds?

Wonderful pictures, you sure have some patience...

We have lots of black birds, but never seen this one. Thank for posting your excellent pictures.

He sure is a handsome fellow!

Another one we don't see out west. Very, very nice shots!

Great photos! Thanks for info too!

great hots and don't remember seeing one on blogger.

Oh my word what a gorgeous looking Blackbird, which I have never ever seen or heard of before. Many thanks for sharing this beautiful capture.

I can see the Rusty in that last shot. Hope their numbers are increasing soon

The are pretty Blackbirds, great shots! I am glad you got to see them. Enjoy your day!

Brilliant captures EG, you can see where the 'rusty' comes in, amazing.I have never seen before.

this is a blackbird I can´t remember weeing before. Glad you were able to do that. :) Great shots .

I have never seen a rusty blackbird before, or heard of them. Ours are all just regular black blackbirds! xx

Never seen these before - thanks for sharing. They kind of remind me of grackles a bit.

Such an interesting bird! Great shots!

That's a new bird for me. Great shots too.