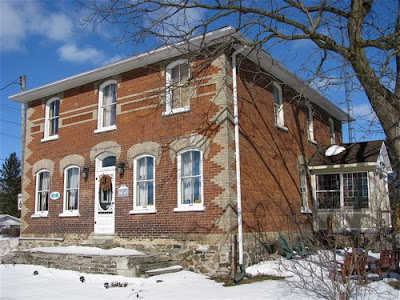 Blake Station, now Brown Hill, is on the border between two towns in an area that developed somewhat later than most of East Gwillimbury.

The Blake Station Hotel is on the EG side, in a hamlet that was once a going concern because the Lake Simcoe Junction Railway (no longer in existence) had a stop here. One reason for the station: a local stock buyer had two pens nearby and shipped two carloads of stock every week. 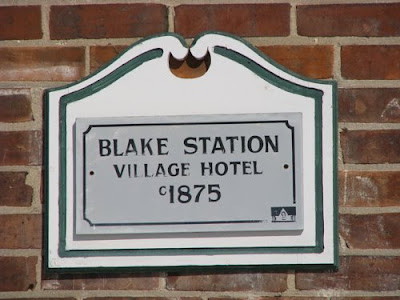 At first, the railway brought prosperity and growth to communities like Blake Station but ultimately caused their decline after the turn of the 20th century. The railway changed the way people did business, making it easier to access markets in Toronto. Small businesses to the north of the city couldn’t compete.

The Blake Station Hotel was at one time larger than what you see in the photo, but parts of it were torn down. Later, the hotel was converted into a store. Now it’s a private home in a tiny, quiet community from which everyone travels by highway or back roads to work and shop in much larger places.
Posted by EG CameraGirl at 10:56 AM

Hi there EG:
I used to live in Brown Hill back in the 70s, and did some of my shopping in that old village store! There used to be a barber's chair in there too, I remember the local men having their hair cut there. Can't remember the name of the people who ran the store though.
About Earth Hour: if you read the comments on my blog, nobody in UK had heard of it! I'm very surprised.

Interesting history. I sure wouldn't mind living there.
I enjoy just watching trains go by and taking pictures of them. I had forgot that my brother retired from the railroad so on a recent visit with him he told me some interesting things he saw while working for the RR.

Another building with style and a touch of class about it. I see many beautiful wooden house but these brick ones are fine buildings in their own right.

Interesting background. Very typical that the traffic is moved from railway to the roads. Nice that they could use the station, though.

Oh wow, Ex-S! I "know" someone who actually shopped in that store. How cool!

Someone named Sedore owned the store in the 60s. (I found that information in a book called East Gwillimbury in the Nineteenth Century written by Gladys M. Rolling in 1966.) Did the Sedores own the Blake Hotel/store in the 70s too?

That's one thing I love about blogging -- you put a little bit of information into Cyberspace and more comes back!

Me again: Re. Your comment to my recent post - Bergen is the main city (240 000 inhabitants) of the county of Hordaland in Norway. The name Hordaland stems from the same word as the English hordes, so yes, there were definitely Vikings in this area!

That's right... Sedore! There were lots of Sedores in that area. And did they have a daughter who was murdered? I seem to remember something about it, but before I lived there.
After selling the house in Brown Hill, we moved to near Udora... Georgina 2nd concession, another hotbed of Sedores!
I also have a copy of Gladys Rolling's book, she was the Mayor of EG I think.

That looks very much like my childhood home in Keene (Ont.)!

Isn't it rich with history - a history that even includes Ex-Shammickite!

Beautiful building with such wonderful history. I love it. MB