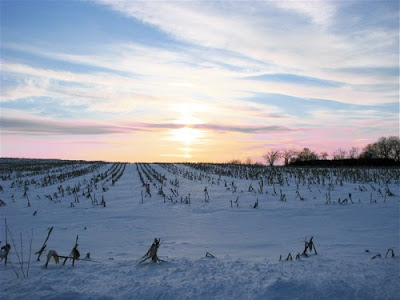 Partially snow-covered corn stubble reminds me of an old man who hasn't shaved for a few days. Ha! But here the setting sun makes the field look almost presentable. ;-)

This stubble is the remains of field corn, also known as yellow dent corn -- eastern Canada’s most important grain crop. Sixty percent of the crop grown in Ontario is fed to livestock, thirty percent is for industrial and commercial uses, and the remaining ten percent is exported. (Not sure who it's exported to, though, since U.S. field corn is cheaper than Canadian so it's not likely we're selling it to Americans.)

Field corn is quite different from sweet corn, the kind we eat as a vegetable. Sweet corn has a thin skin and is loaded with sugars. In contrast, field corn has a thick outer skin that doesn't soften enough to eat even if you cook it for several hours.

And by the way, did you know country bumpkins like to snicker when they hear city slickers stealing field corn under cover of darkness?

OK, people can’t eat it (unless it's dried and ground or corn oil is squeezed out of it), but in the fall Canada geese LOVE to forage amongst the stubble, picnicking in large gaggles.

And speaking of geese, I spotted a flock of Canada geese today! Not in a field of stubble, but on a pond. Whoo hoo!!

And a red-winged blackbird was at our feeder. YAY!
Posted by EG CameraGirl at 8:22 PM

Amazingly vivid pink in those clouds. We have some Canada geese that stay near us almost year round at the University up the street. They fly south for the worst of winter (December to February) but come back in March to stay the rest of the year, having their babies and raising them, etc. I suppose now they are Florida geese. Maybe they have retired? :)

What gorgeous colors in that sky!!!! So very beautiful! I would have been in absolute awe.

A very nice post and a very nice photo. I seldom go to the movies, but last week I went and saw the movie King Corn. So this is a timely post to me.

So pretty the snow on the corn field and lying under that beautiful sky. Great shot.

That is a beautiful snowy picture. Snow does help in making great pics. I saw a red winged blackbird down at our pond. they nest there every year and are fun to watch. But don't get too close!
Our valley here grows a lot of field corn. Grown mostly by the dairy farmers for silage for their cows. The sweet corn is harvested and sent to the process plant and frozen---mostly for local stores.

I run my 1969 and my 1971 Landrovers on a cornoil and diesel mixture... at the moment I'm on 75%corn/veg oil mixed with regular diesel. The engine heats up better, runs smoother, and there is less visable smoke.... but it stinks like a 'Big Mac' is being cooked at times.. ha!
Nice to hear you birds are making their return... always a good sign.

Anything with snow is beautiful to me! Of course the sky is great too, but only second to the snow!

The colors in the sky are simply gorgeous!

You catch some amazing colors there!