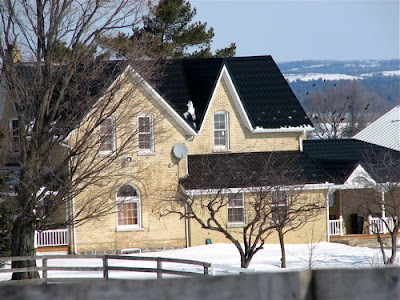 Say “brick” and most people imagine rectangular orange or reddish blocks. But travel along country roads in southern Ontario and you’ll see many soft yellow (some say buff) brick farmhouses, brick made of local clay, which contains less iron than soil that produce terracotta colours.

Built in the late 1890s or early 1900s, this East Gwillimbury home-- still on farm land! -- has two verandas. The one at the left of this photo faces west. Can you imagine the turn-of-the-century owners congregating there at the end of long summer days to watch sunsets? (Today they likely gather round the TV or computer receiving signals from around the world via satellite -- see the dish?)

The second porch faces south where the sun reaches it for most of the day. What a nice place to enjoy a fresh cup of tea or coffee before setting out to do chores.
Posted by EG CameraGirl at 9:16 AM

Hey thanks for the visit to my blog...I love it when I get to meet fellow Canadian Bloggers...I have never heard of where you are from...my husband is from Hamilton and use to work in Toronto, so he knew where Gwilllimbury was....I love the photo...old meets new and the colour of the bricks...yes whenever I think of a eastcoast home I do think of bricks...red of course....

What a lovely home. The soft yellow looks so inviting and nostalgic.

I bet that pretty rural scene is a bit more snowy today!
I'm just a bit south of you, and we are having horizontal snow all day, huge drifts in the driveway. The sidewalk is nonexistant. Very windy and cold, I have hibernated all day.

Welcome to the world of Daily City Photos!

It's great to see your blog. I used to live in Richmond Hill before moving to Guelph!

Ex-Shammickite,
Inside was a good place to be today. ;-) But I did venture out to clear the driveway bit. Thw wind will probably blow all the snow back in. Hahahaha

Pat,
Thanks for the welcome!

This is a very nice picture.
Really good addition to CDP.

Is Sharon part of East Gwillimbury, or vice versa? My cousins live in Sharon, just down the road from the temple.

Thanks for coming by to say hi .. I am feeling better .. and I love your photo

Yes, Sharon is one of five communities that make up the Township of East Gwillimbury. The other four are Holland Landing (the largest), River Drive Park, Queensville and Mount Albert. Sharon is on the south side of centre EG.