Staking Out Their Territory 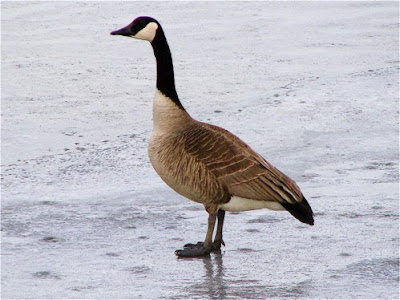 I’ve heard them overhead, seen them in the distance, and TODAY my camera caught one as proof that it’s not an illusion – the Canada geese (Branta canadensis) are really back!

This goose/ gander (they are difficult to tell apart) has probably already mated as geese often do so before they return to their nesting areas. Geese are said to mate for life and--since they can live more than 20 years--they could be together for a long time. Canada geese live in flocks most of the year, except when they’re nesting.

The goose in this photo is standing on ice, guarding what he/she considers to be his/her pond. Most of the pond is still iced over, but there's a small melted area for swimming. It’s a tiny pond and the goose doesn’t want to share it with another couple.

But if I were the goose, I’d be much more worried about the gulls flying overhead than fretting about other geese. Gulls have an appetite for goose eggs.

Although called Canada geese, these birds live all over North America from the tundra to the Gulf Coast as well as in some places in Europe. They are large birds, ranging in length from 30 to 43 inches. (They tend to be larger in the southern part of their range. And believe it or not -- although I live in Canada--I live in in the southern part of it's range, the boundary being latitude 60°N.)

It's amazing, considering how graceful they appear when they fly overhead, that they can weigh as much as 20 pounds. They need long, strong wings to propel themselves through the air. And in fact, their wingspans vary from 50 to 68 inches and are powerful enough to use as weapons. It's not smart to anger a goose!
Posted by EG CameraGirl at 12:03 AM

That is a fine looking bird. Are they aggressive?

YAY!!! They finally came back and you are able to take a picture. I am glad for you. MB

A great goose post.. a nice picture and very good info. We get the large flock in the countryside at winter. Some farmers do not like this at all nd many of these are shot as pests. I agree as well about not getting a goose angry.. they go mad. ha!
have a great Easter weekend
Tom

Kris,
No, Canada geese are not aggressive. But they WILL defend themselves, their goslings and their eggs. I got fairly close to goose in the photo. He didn't fly away but he did keep his eye on me.

A course I used to golf at had lots of geese and if the ball went near them I would consider it lost.
Helped improve my game though;)

I'm surprised to see that they ever leave. Canada Geese stay here all year round, and are generally considered a pest. A beautiful pest, but a loud, dirty pest just the same.

Oh yes, I have angered a goose before, and let me tell you, it was pretty scary. Did you know they buzz like a bee when attacking? Or maybe that was the wings flapping so wildly. But I must say, very scary. Nice shot. I think I'm posting a goose I met recently on one of the next few days' blogs.