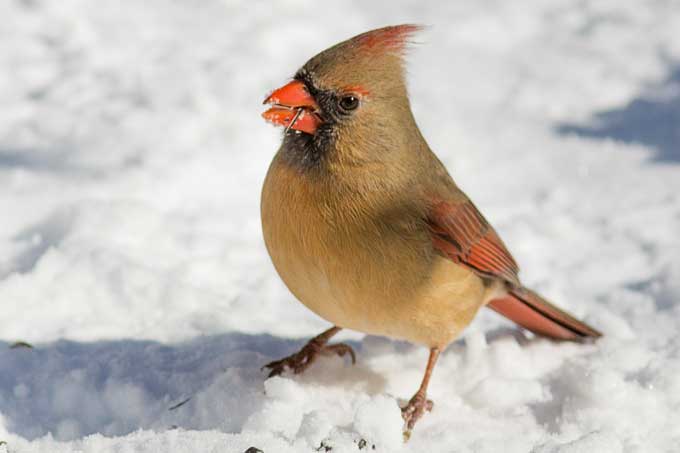 On a recent walk in a forested area many birds were out and about. The female cardinal was not one bit embarrassed that I was taking her photo with seeds spilling out of her bill. 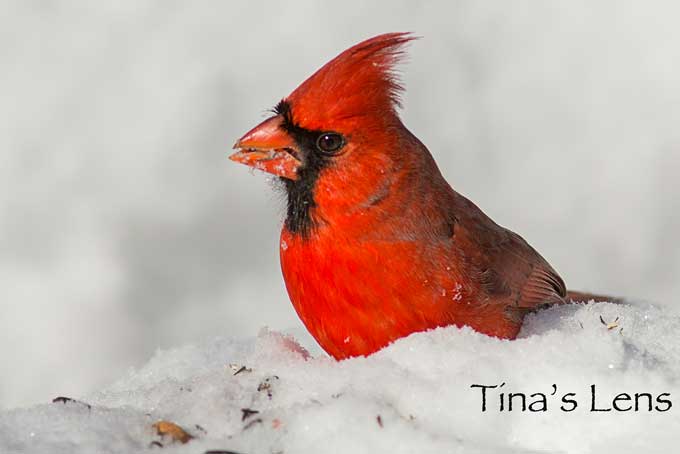 He was hungry too. 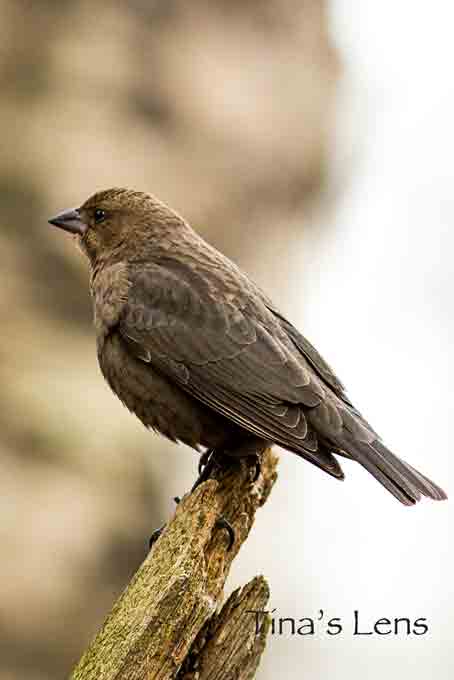 The cowbird was much more dignified. 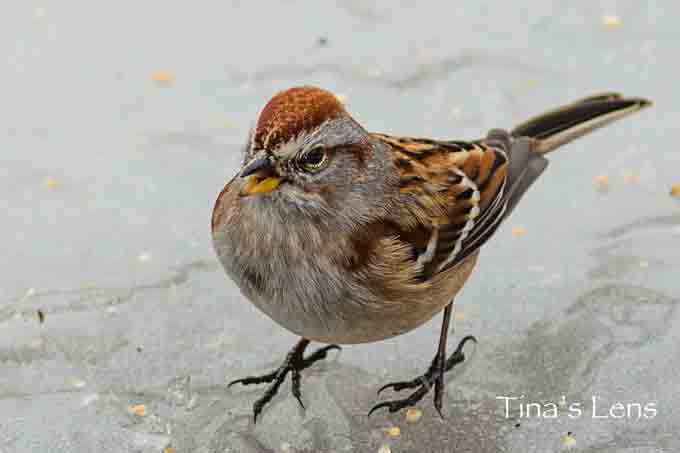 And the sparrow was yakking about something to do with cold feet and humans who throw seeds onto frozen ice. Well, I think that's what it was saying.

I am linking to Saturday Critters HERE.
Posted by EG CameraGirl at 4:30 AM

I always like looking a the Cardinals. They are so colourful... including the female.

Great photos of the birds, nice when you can come so close.

Oh, these birds are beautiful but my favorite are the cardinals !
I love their colors and hairstyles :)
Have a happy weekend :)

Beautiful cardinals and I love the pretty Tree Sparrow.. Wonderful photos. Thank you for linking up and sharing your post.. Have a happy weekend!

Very nice shots, particularly the cardinals against the snow.

It's nice to be able to capture birds other than at our backyard feeders isn't it? These are all awesome photos Tina.

Mr and Mrs Cardinal look like they were made for each other..

A lovely selection of pictures. It's years since I saw thos birds at Long Point but remember them well. Thanks for the memory.

The two cardinals are probably paired? We have several couples that hang around our bird feeder. Wonderful portraits of all of the birds.

They really are such pretty birds, particularly the cardinals.

so beautiful, those cardinals, they really PoP in the snow!!!!

These are all beautiful shots of these birds. Have a lovely weekend.

What a wonderful walk!

Lovely pictures. I would just so love to see a Cardinal,now that I do photography myself.I have seen one but that was before my camera time.

So many beautiful birds sharing the woods with you!

I'll bet they were very happy that somebody threw seeds out! I'm jealous that of all the cardinals we have here that I'll probably never get a photo of one in the snow!

A nice set of 'portraits'!

Brrrrr!!
Leave it to the Sparrow to complain about something---anything.
Neat shots.
MB

Love the cardinal photos! I always enjoy seeing pics of birds we don't have here.

I love your cardinal pics.

They are a challenge for me, they always see me and do their best to keep me from getting sharp pictures.
~

great shots of the cardinal pair :)

I'm in love with your birds pictures! all of them are perfect !

My parents have resident Cardinals who fight it out with the sparrows every day to get at the feeders. The Cardinals stay quite late in the evening at the feeder!

I had lots of sparrows which I fed, until my landlady stopped me.

Marvellous photos, all of them!

These are amazing photos. Good for you.

The cardinals are beginning to sing here now. Perfect shots of all the critters, thanks for sharing,Phyllis

Oh, I so love all of these...they are so sharp and clear.

Beautiful birds! I love the cardinals.

These are all amazing! I can never seem to get close enough to the cardinals to get a good shot.

Cardinals are so pretty.