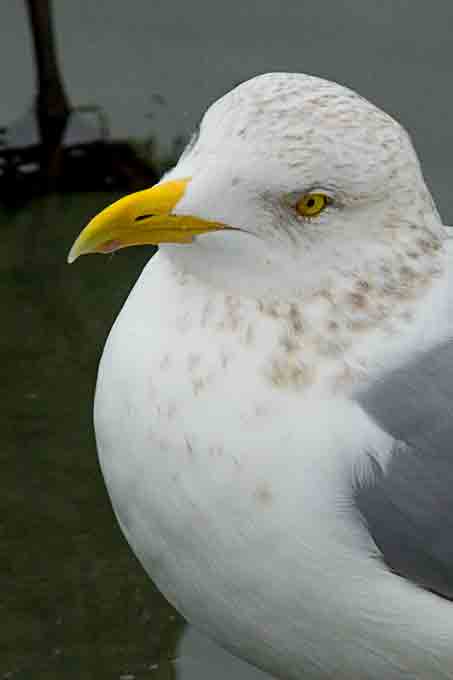 Not all gulls are rowdy and pests, but this species sure can be! It's one of the two species most commonly seen in the Great Lakes area. I recognize them by their size (they are BIG gulls), their pink legs and feet and the red dot on their lower bill.

A week or so ago, two herring gulls were hanging out with some Canada Geese and Mallards at the entrance to the harbour at Bond Head.  Although they are BIG for gulls they are much smaller than the mallards and geese. Someone was feeding seeds to the birds and the geese weren't letting the greedy gulls anywhere near the seeds until they were finished. 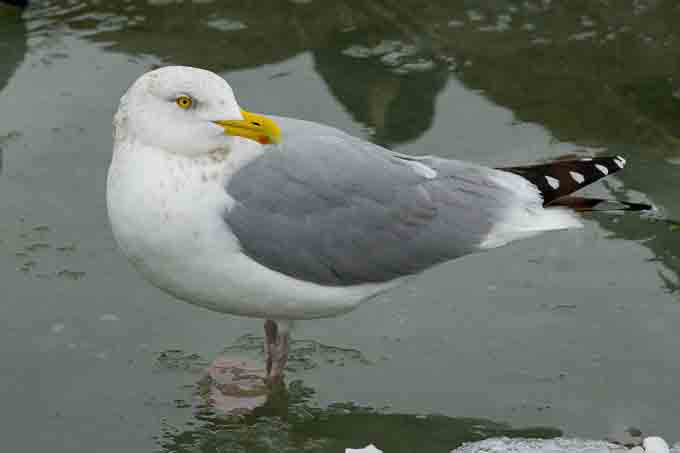 The gulls kept trying though! They are very persistent and finally got to eat too.

I am linking to Saturday Critters HERE.

Posted by EG CameraGirl at 4:30 AM

The red spot on lower beak is a distinguishing feature I haven't seen before EG, will watch for it in future.

Great closeups!
I never get close enough to them, I must look very scary :D
Have a fine weekend!
【ツ】Knipsa

Gulls seem to be good at following others around in search of food.
Lovely shots!

Great post and photos on the Herring Gull. I am glad they were persistent.. Thank you for linking up and sharing your post. Have a happy weekend!

The things I learn here about bird identification! Looking forward to putting some of it use this summer. Oddly enough, we do get some gulls around here... not terribly popular however, many folks call them 'winged rats'.

didn't know about the red spot either. Loved how yellow his eyes and beak are.

They are unusual with the red dot. Great shots.

A lovely gull except if you get in the way of that beak! Have a lovely weekend.

Quite a distinctive looking gull!

He's proud of his portrait. See the gleam in that eye. On further review, maybe he's lookin' at that french fry in your hand.

Nice close up. Just mind your fingers when you feed them!!

he is a fine specimen of a gull. down here they are truly pest if people feed them. can't walk or sit or lay on the beach and if eating they are true pests... the gulf side restaurants when eating outside have signs posted, don't feed the gulls. but people do. sometimes they come and sit on the table trying to steal food.

What a pretty bird!

Ah, I do love your gulls and your "up close and personal" captures are the best!! Such a great start for my day! Hope your weekend is off to a fun start!! Enjoy!

I love these beautiful birds !
Fantastic shots !
Have a happy weekend !

Our gulls are not exactly the same , but they do the same thing !

I'm always delighted with you wonderful pictures! This fellow is cute!
Wishing you a gret weekend,
Hugs
Leia

We both posted gulls today!

The Herring Gull is our commonest gull too, very numerous. Your photos remind me that I shouldn't neglect either looking at or photographing them. Gulls are very photogenic as well as successful

The Herring Gull is our commonest gull too, very numerous. Your photos remind me that I shouldn't neglect either looking at or photographing them. Gulls are very photogenic as well as successful

I know that gulls are considered pests by some,but I like them as they give good photo practice.You got wonderful shots here.

I don't know about this breed, but gulls in general can be very aggressive. In Florida, they will eat the food right off your plate!

I had an encounter with one in a parking lot this morning! Someone had spread food around for birds right by where you park the shopping carts and there was no way this guy was going to move and let me by! I finally won. ;-)

Great close-ups of the gulls. I'm surprised at how many different gulls you do see in Ontario. Wendy

Lovely Herring Gull, posing for you.

I wonder if the gulls here are faring well....they seem to be so resilient.

I can't help but love gulls despite the...ummm... mess!

Really great photos..I corrected my ice cover statement. I know our local rehab and others are getting in lots of starving diving ducks as we usually have open water in the harbor and along the river..It will be sad time again..Michelle

Always enjoy your nature study photos, thanks for sharing with us

my blog moved to www.pearlmaple.com

They are a two-edges sword--lovely to photograph but a pain to be around! Great shots!

We learned about these big guys in Alaska. I used to only be able to ID California gulls and laughing gulls. I learned a few more last summer! A nice portrait and great description of all the bird behaviour.

Oh that is a lovely shot of the herring gull, we have a few here. I can never id my gulls, I wish I would study them more.

Wonderful close up shots of the Herring Gull, and I especially like the rather sweet expression in the first pose.

Beautiful pictures of the Herring Gull.
Perfect gefotogrfaeerd, my compliments.
Have a nice Sunday.

soemtiems these guys can be annoying, but I still miss them in winter. But they will probably be back soon.

i am happy you've featured a critter we don't really appreciate enough! They do clean up after us.

Great photos of them...interesting to learn about these particular gulls.

Awesome captures, a regular visitor around the jersey shore!!