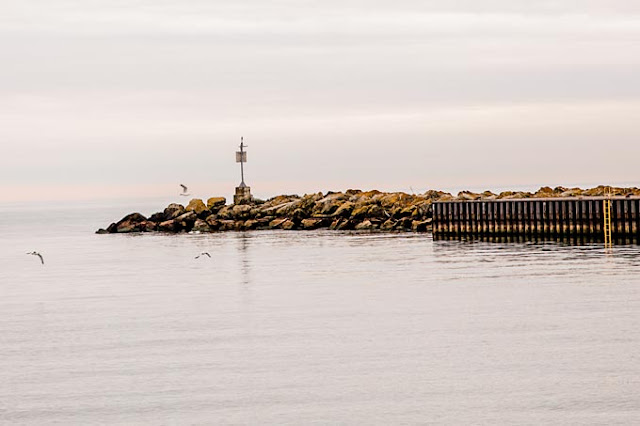 It was chilly with no ice. The temperature has dropped a LOT since then but I have not yet been back to check out the ice, which I suspect is there now. 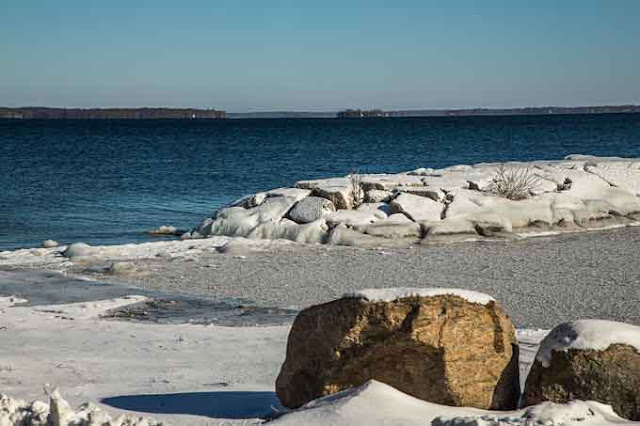 In contrast, this photo was made yesterday at Jackson's Point. Yep, that's ice on the rocks and in the shallow end of the bay there.

I am joining Wednesday Waters HERE.
Posted by EG CameraGirl at 4:30 AM

Great views over the water, winter is slowly coming closer.

Wonderful scenery, so relaxing it seems.

Both are lovely views but the second one better especially with the ice on the rocks.

That first shot looks so lonely...the second makes me cold just to look at it.

Both shots are so pretty but look oh, so cold. There is on one out on the pier. That had to tell you something....BRRRRRR.

You're just TRYING to make me feel cold, right? We Floridians don't like cold. (just saying...we put on parkas when it drops below 70)

I can live with the -5 temps, but the -18 temps are a bit too much!! Lovely photos, very arctic looking!

it is beautiful with the bright sun shining on the ice....

Love to see your winter images when it's 39C here EG, they have a psychological cooling effect :)

Beautiful shots. The cold has been slow in coming this season but it's here now. Brrr.

The first photo is a beautiful landscape. Frame it!

Nice photography, EG! In both cases. I have a feeling that winter will be arriving in all its glory fairly soon and ice will be the norm... :)

Such a contrast with the blue water and ice.

Lovely place, even though it's cold.

Beautiful, but the second is my favorite. Winter is beautiful. I keep telling myself that, because we have a long one ahead of us. :-)

Beautiful shots! The cold has finally settled in here too.

Beautiful captures of beautiful places, as always, EG!! Terrific! Thanks for sharing, as always, too!! I hope your new year is off to a great start!! Enjoy!!

Well, at least that's almost as it should be.

I really like the first picture, there is a certain feeling to it...

It may be melting today, EG!

I'm so happy for it to get colder. It was coming, we knew it, but it just hasn't felt right! I can't get onto the wetland yet!

Looks really lovely view. And I guess there is not SO cold yet beacause there is no ice on the whole water...
We have just now -24,9 C (in this morning) Brrr.. I don't go out.

Lovely views but ice on the rocks! Wow!

I love the serenity of that first photo.

Great shots! Is that Whitby in England and where is Jackson's Point?

Brrr!!! It looks very cold even without snow and ice! xx

Superb capture on both the images! Seems the snow/ice slowly filling up the landscape and lake

Oh! I should have looked at these before! Love the 'white' first pic and of course, the ice... Ahhh, ice!

There is something about the light that screams, "Cold!"

There is a haunting sense of lonely quiet in the first scene. And amazing to see ice by water under blue skies in the second scene.