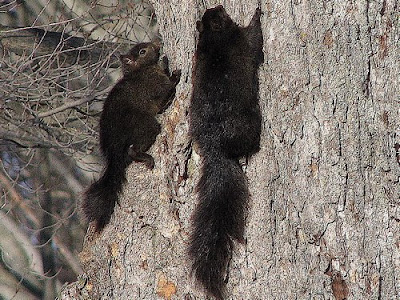 What colour is an eastern grey squirrel (Sciurus carolinensis)? 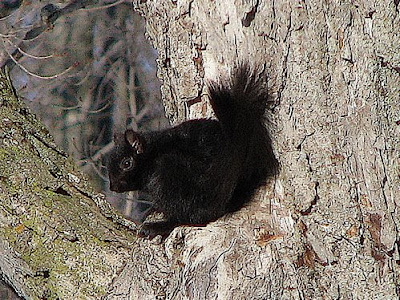 Lots of people think black squirrels, which far outnumber the grey in my neighbourhood, are a different species from the grey, but black is often the dominant colour in Ontario and Quebec. Black squirrels also live in pockets of Detroit and other cities in the northern U.S.

These squirrels are sunning themselves on the south side of this tree. Their black fur absorbs the sun more efficiently than grey would, which may be the reason most black eastern grey squirrels (I like saying that -- it's sort of a tongue twister) live in the northernmost part of the species' range.

City squirrels are often bold but these guys are country squirrels and a bit more wary than their city cousins. As I moved in closer to get a better photo... 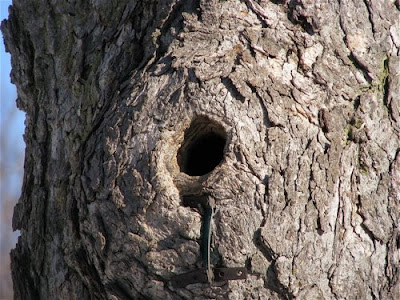 they scurried into this hole. Actually, there were five of them and they ALL fled, entering the tree through this hole. And not a one would poke it's head out again so I could snap its picture.
Posted by EG CameraGirl at 7:56 PM

Since I've never seen a black squirrel the ones in your pictures look really strange to me. We have way too many grey ones around here but I think your black ones are prettier.

They look like they would be fun to watch. Nice photos.

Strange and cute. In Sweden they are chestnut-brown coloured.

Have a great week!

I saw a recipe online for 'Brunswick stew' the other day. It's made of grey squirrels.

For some reason it feels wrong to admit that it looked kind of tasty!

I don't think I've come across these before.. I must say they look stunning in a black coats.