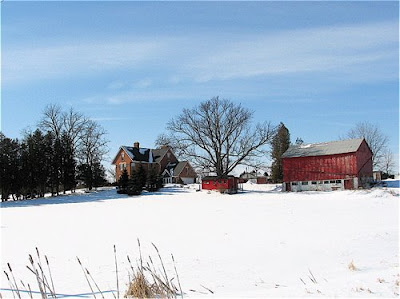 Would you believe this photo was taken yesterday afternoon after a morning snowfall? The clouds moved in, dumped their load and then moved out, leaving a pristine landscape. By the time I snapped this photo, the clouds had almost completely evaporated. Snow still remained on the ground because it was a frigid day, but it had almost completely melted off the black and metal roofs.

FINALLY it's March and the sun's heat is slowly gaining the edge on East Gwillimbury's icy cold winter.

The roads were a bit greasy though, so mushy with road salt that water leaked through my not-so-waterproof boots when I got out to snap this photo. OOPS!


Sky Watch this week is hosted by Tom at Wigger's World.

Hello EG
What a clear Sky that is... your last three posts could all have been Skywatch pictures.. It looks a very beautiful place to live.

Thank you for linking as well..

Another beautiful shot. Keep those toes dry up there! ;)

Oh I love the primary colors! The red barn and the blue sky just play off each other beautifully.

beautiful photo, i'd love to get some snow like that!

That sure is beautiful. So crisp and bright. I love it.

I love scenary like this. Thanks for visiting Sitka Daily Photo.

What a serene place this is, even with the snow, I sort of am sick of snow cause it should be spring.

Beautiful sky watch! This must be a beautiful place to live.

The primary colors on the photo are quite great.
A fantastic photo!

Beautiful! I love the colors, they draw you in.

I think this picture could be taken in Norway as well. Almost the same buildings and landscape.

Nice weekend to you from me.

Great sky, beautiful place. Is this yours? You lucky duck!

Now that is really pretty. I love the snow against the red barn and blue sky. Excellent choice!

Love this photo! Being a farmer, I am drawn to photos of barns and farms. Your next post with the sign made me smile too ;-)

I love these shots. I am a sucker for old barns and snow.

Beautiful colors in this picture! Love it!