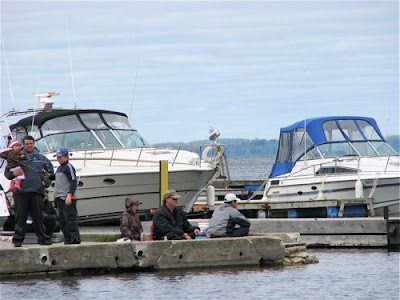 Until 1830, Lake Scugog (pronounced skoo-gog, accent on the first syllable) was a shallow river that meandered northerly through thick swamps and muddy bogs. But when a dam was built on the Scugog River, thousands of acres of land along the river's banks were flooded creating the lake and an island called, you guessed it, Scugog Island. 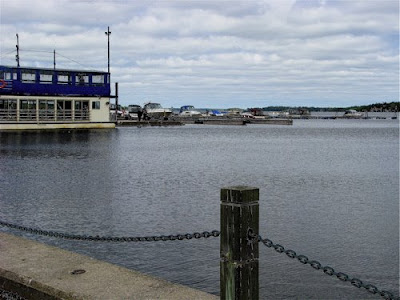 Lake Scugog covers 63.5 square kilometres (25 square miles) with an average depth of 1.4 metres (4.5 feet) and a maximum depth of 7.6 metres (25 feet), all of which the Lindsay Dam artificially maintains.

Walleye and bass thrive in this shallow, murky and weedy lake. And in winter, the lake is covered with ice fishing huts, fishers there to catch walleye and perch. Crappie is abundant in spring.

Both photos look like the air and water were cold. Trust me, they WERE.
Posted by EG CameraGirl at 2:45 AM

Sound a great plave to be and to have walks... dose that water ever get warm.. :O)

I would love to see all those fishing huts in the winter.

Sounds like good fishing to me! I have never tried ice fishing though people do it around here. The older I get, the less I like cold weather.