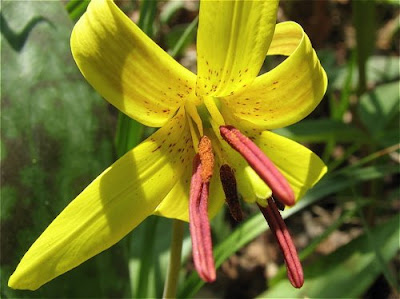 Look at the mottled leaves resembling brook trout and you’ll know why this beautiful wildflower (Erythronium americanum) is often called a trout lily. But why it’s also called a dogtooth violet baffles me – especially the ”violet” part. In no way does this flower look like a violet. It really is a member of the lily family though.

Trout lilies grow in large colonies in parts of the York Regional Forest, often found near the trillium and bloodroot I posted about recently – close to the ground in open woods. Trout lily leaves abound, but I just recently learned that the plant doesn’t flower until it has two leaves…and that takes seven years after it first sprouts. Hmmm. Here’s another wildflower that takes its own sweet time to mature into blooming. ;-)

Each yellow flower nods from the top of a leafless stem, opening in the morning and closing at night. At midday it opens so far that the petals are all curved. So what time of day do you think I took the top picture? 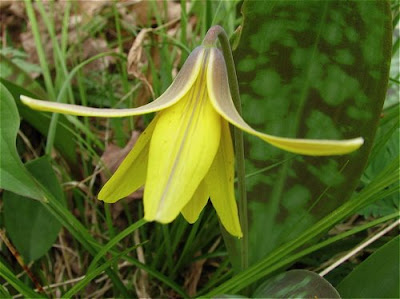 Looking at the second photo, you can easily see that the flower has three petals and three petal-like sepals. What, you say? OK, I was kidding about the "easily" and I'll explain. The petals are entirely yellow and the sepals are yellow on one side and brown on the other. I bet you can see it now.

In a few weeks, the leaves and flowers will completely disappear. For the rest of the summer the plant will concentrate on spreading underground. Some colonies are said to be as old as the hardwood trees shading them -- two or three hundred years old. But the trees in this forest are much younger, as this is farmland abandoned around a hundred years ago because it was too sandy on which to grow crops.
Posted by EG CameraGirl at 12:49 AM

I am trying to figure out the connection to trout. The spots maybe...?

Isn't it interesting how many woodland flowers are yellow and bright yellow. Maybe for pollination--so the pollinators will see them. ? MB

I look forward to my visits here, this week as been such a pleasure to see all these flowers. It is only resently in my life that I have took much interest in the wild flowers around me. Pictures and writings such as your have certainly helped me to take notice of where I tread and what I see when out and about.
Your post todat was once again beautiful, informative and plain good viewing :O)

I love these flowers but they don't last long enough for me so I don't have many, just several clusters.

I made it this morning to look at your post and then I am off for a lung test. I hope to be finished with all tests and back to normal by the 12th or soon thereafter.

Your photograph is really nice, as usual.

Do you have a wildflower book to help you identify all these flowers? If so I'd love to know the name of it.
This one is a beauty!

I do have a wildflower book I use to identify the plants I find in the wild: A Field Guide to Wildflowers of Northeastern and North Central North America by Roger Tory Peterson and Margaret McKenny.

It's a visual approach book, which I really like. All the white flowers are together, then yellow, orange, pink, violet, blue, green brown. Some of the plants in the book reach down as far south as Georgia but I imagine you have a lot of different wildflowers...maybe not though. The book claims to go as far south as North Carolina, but the climate there may be quite different from where you are.

Kris,
The leaves are mottled like a brook trout-- I think the photo could have shown that better. LOL If the sun comes out today, I may get a better picture of the leaves!

Such a delicate little flower and so pretty. I am alswys mindfull when walking throught the nature reserve as not to tramle on anything so fragile.