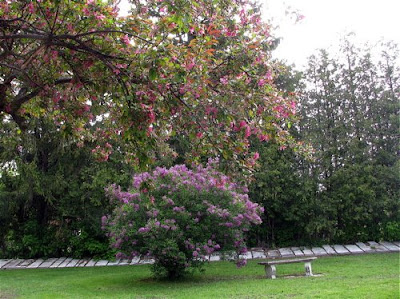 The land that eventually became the community of Mount Albert was first settled in the 1820s by Quakers on the east and west sides of an old Indian trail, which is now called Centre Street.

Other settlers soon followed, purchasing land from the Quakers. Many of the newcomers were Methodists buried in this cemetery between 1830 and 1894. Life was hard back then. Looking at the stones, it's sad to realize that many of the stones once marked the graves of children. But now the stones have been moved and laid flat, arranged in a line at the back of the cemetery for some reason I don't understand. 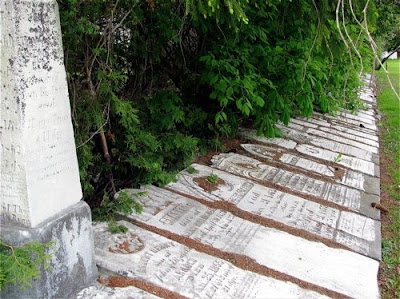 Here's a closer view of some the gravestones. 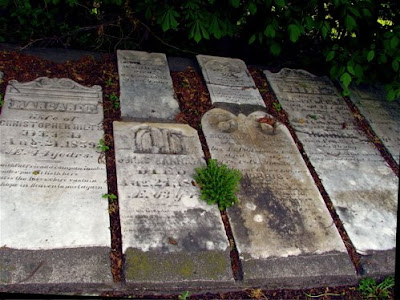 And here's another view. As you can see the engraved stones have weathered over the years and now many are difficult to read. 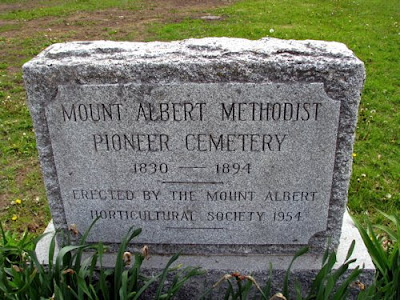 At the front of the cemetery, an engraved stone reminds passersby that this parquette is actually a cemetery.
Posted by EG CameraGirl at 3:43 PM

I think I'm like you, I'd rather see the stones set in the ground where they should be. Some of out old grave yard are a disgrace and it is very upsetting to see the state the church as let them get in. I will not go on about it now as it is annoying.

I wonder if they put them there so they won't fall in to dis-repair or vandalism or something. Looks weird. I would rather see them upright where they belong. MB

This may sound strange but I love to visit old cemeteries. When my wife and I go to an area where there are old ones we always walk through them. Sometimes you see where a couple lost 4 or 5 kids in the span of a year. I just can't imagine that kind of pain. One big advantage of putting them at ground level is that it makes mowing much easier. However, I like to see them upright.

BTW, thanks for giving me the names of the flowers. I knew the columbine because that's my favorite flower but the others would have been a guess.

It is sad to see many of the old cemeteries in a state of neglect.

Martha and I sometimes look at the headstones and try to imagine what it must have been like before modern medicines and quick medical care.

That is really strange to see the stones like that. I wish you could find out more.

I agree with everyone else, they do look strange laid flat like that. My immediate thought was the ease of mowing, also.

I visited this cemetery years ago ... my great-great-grandfather was actually buried here and his stone still remains, albeit now in a row with the others. It's my understanding that the cemetery had fallen into disrepair and that a number of the stones were broken. Hence the "cleanup" and the movement of the stones to the back of the park.

Thanks so much for taking this photo - it contains the gravestone of my great-great grandmother, Margaret Hilts, wife of Christopher Hilts. If you hadn't taken it I never would have found her.