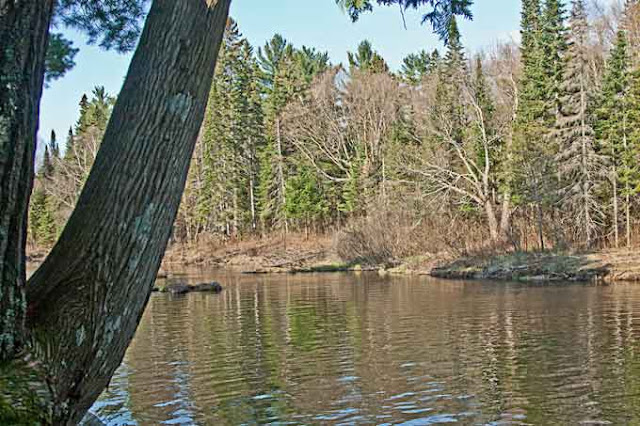 Last Saturday, my husband and I headed for Algonquin Provincial Park,  one of the most beautiful destinations in Ontario. 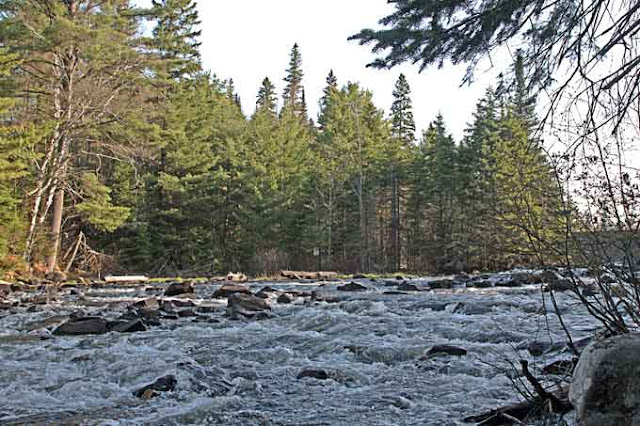 We traveled along route 60,  which runs east and west through the southern end of the park. Beautiful views of rivers and lakes can be seen from the highway or from campgrounds, trails and lookouts a short distance from it. 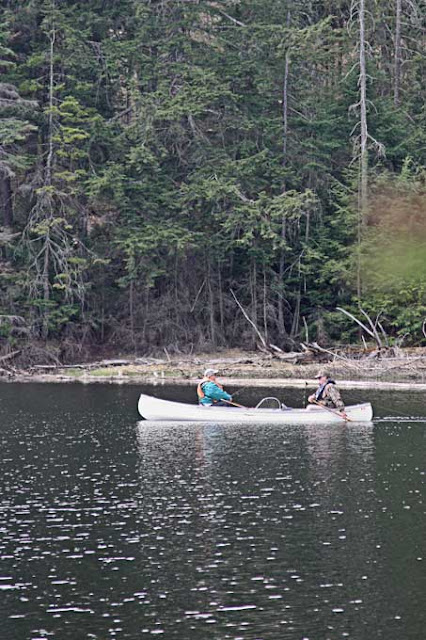 And along the way we saw canoes and kayaks floating on lakes and rivers, and tied to the top of cars. 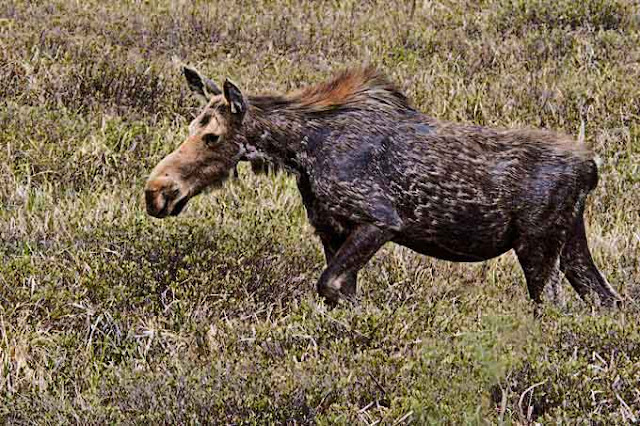 But the biggest treat was to see moose, apparently often seen here during the months of May and June. 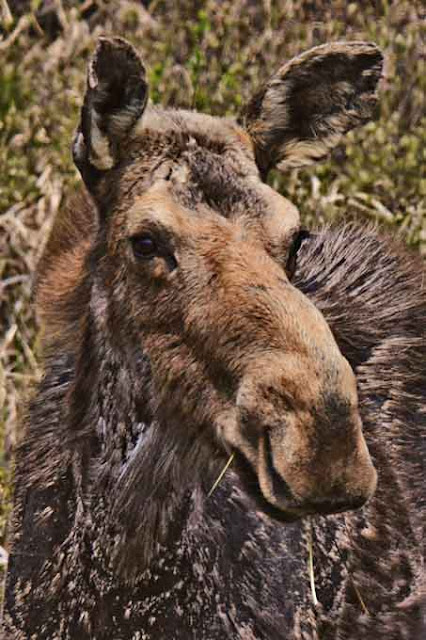 We were lucky enough to see two moose, both females. 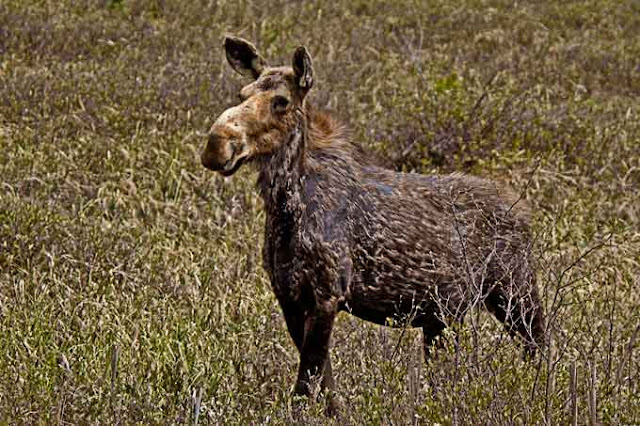 But we could hear the calls of males in the distance. Was this female listening to a male's call...or watching me with my camera?

Click  HERE to see tons more photos about Our World.
Posted by EG CameraGirl at 6:12 AM

Great photos. My wife and I keep hoping to see a moose in our travels. So far we have only seen one a way off in a foggy field.

The female moose is beautiful, I would like to enjoy this wonderful landscape there, looks like a perfect weekend!
Thanks for sharing your wonderful compositions.My favorite is the moose portrait, she is nicely posing for your camera!How cute!
Léia

Spectacular scenery! I'd be so excited to spot a moose in the wild.

like the rapids, it has been about 50 years since i have seen rapids like this one. the first moose looks like she does not have enough to eat. kind of skinny. love her face.

Nice shots. They are such strange-looking animals!

Wonderful! How fun to see the moose. We enjoyed seeing them while driving around Norway. None of them where we live now, though.

how exciting! we saw a little river otter yesterday when we went to the creek but it was so sudden that i couldn't get a pic and then he was gone!

The views of the river and lake are beautiful, so this must be a marvelous place to visit. Your pictures of the moose are marvelous.

Interesting photos of Moose - smaller than I expected!
Lovely compositions and page layouts!

What a lovely spot in our world. Oh, I want to hug the moose! They look a little disheveled and hungry. But perhaps their coats are shedding for hotter days ahead. :)

"one of the most beautiful destinations in Ontario." - how true! And almost as nice as the coast of BC! :)

You always see the most interesting things on your outings! These are fantastic pictures of the moose! I had a close encounter with a moose once while hiking in the woods in Montana. We surprised each other and ran in opposite directions. Needless to say, there were no pictures taken of that moose.

i hope she's just shedding and not covered in ticks or something. poor girl. :)

Oh wow - what great close-ups of the moose! Lovely - and such a treat.

Wow, moose. Not something you see everyday. Awesome photos!

Them moose, they are so clumsy looking but they can really move fast.

love the moose shots! beautiful country there. thanks for stopping by.
Sue J.

What a beautiful place, beautifully captured.

So exciting! Wonderful photos. Love those rapids too.

Wonderful photos to see! You captured the nature and the moose just great :) They looks a little different to our mooses, another coulour of the fur.../Susanne

What a fantastic place! I love the rapids! Of course, my favorite is the moose -- I remember when I lived in Montana and we would see them frequently. The females do look thin and scrawny in the springtime -- having calves and nursing them perhaps. Love the close-up you got! Terrific! Have a great week!!

You're not too far from me!! Boom & Gary of the Vermilon River, Canada.

Great shots from a fantastic place.
We only seem to see moose when we're driving.
Thanks for sharing.
Mette

Wow, great shots, especially of the moose. I have only seen a moose up close once in my life and I was too slow with the camera to get a picture.

How exciting to see such a beautiful animals. All your photos were fantastic!

Wow - what a wonderful post! Love your moose shots.

Awesome captures -- the moose look to be losing their winter coats. :)

Wonderful photos of the park. I have heard of this park and that is what a great place. I might have to add it on to my wish list. Oh, and the moose are my favorite. I love Moose. Great photos, thanks for sharing.

What a beautiful part of the world to explore. Such a treat to see the moose you photographed as well as the rugged landscapes.

A beautiful park! I don't know why, but moose always seem to look so friendly. I think their faces just look like they're smiling. A nice animal to be associated with Canada. :)

PS: I'm doing internal communications and training for the rollout of SAP at the company my husband works for. They have several locations east of Toronto. So far, I'm feeling really overwhelmed!

Wow! Moose sightings! I used to see quite a few moose when I was a child at out cottage north of Montreal. Fully grown, they are huge animals. Great post!

Like a fairy-tale. Thank you. Please have a good Tuesday.

These females (moose) have a distinct profile. Happy you found them!

Those moose photos are amazing!

Fantastic - I've only seen moose a couple of times in the wild, and never got a good shot with my camera!

That is truly exciting! Great captures in the wild.

What fun! We did this two years ago. There were moose AND BUGS galore! Well done. How were the bugs?!

They were awful for us.

I've always thought that moose were one of the funniest looking creatures- but beautiful at the same time.

Really great shots. I would love to be in that canoe!

Such a beautiful part of the world and incredible you caught moose! (Kind of looks like they're saying: 'This is my good side' :)

Hi there - great pictures - always have had a bit of a soft spot for moose. They do look like an animal that was made up of parts the other animals rejected!

Beautiful destination indeed! Loved the sights as well as the moose3 shots.

How lovely that you saw the moose, we missed out on them when we were there.

the moose blends very well in that nature. :)

Wow - lucky you EG! We also have moose here but I haven't seen any for a long time :(
Are they changing fur or are they wet?
Happy SWF!

What a terrific place for hiking and seeing a moose!

To see that moose would have made my day!