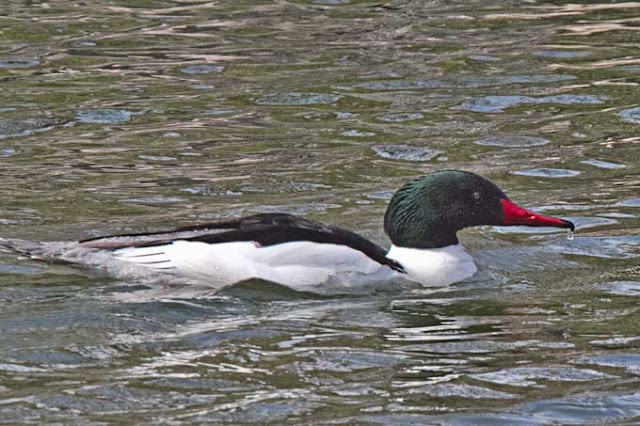 Saturday, my husband and I were in Barrie on the shore of Kempenfelt Bay when this male... 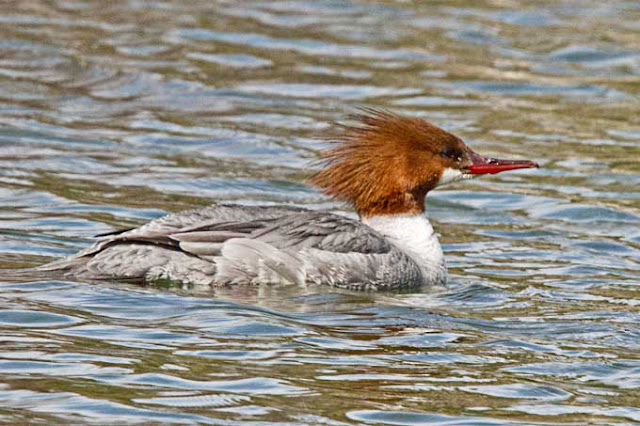 and female landed a little way from where we were standing. 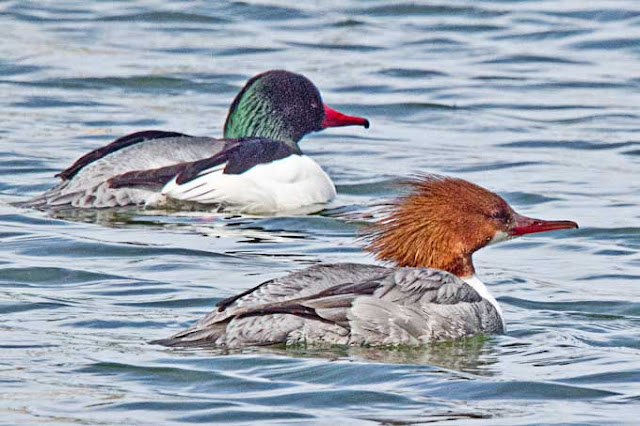 Male and female inspecting the environs

They swam around a bit, apparently checking out the ins and outs of a small island close to shore. 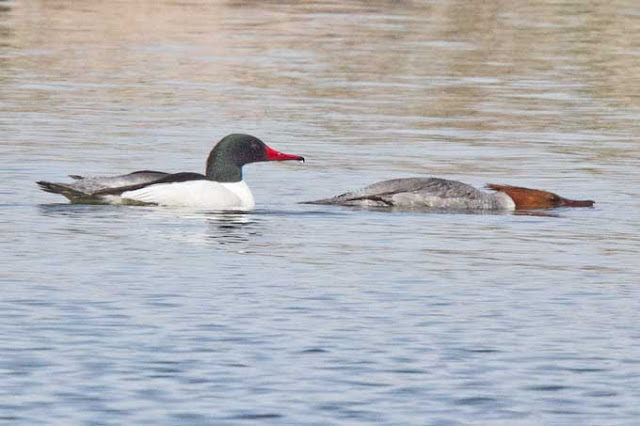 She's NOT taking a nap or playing dead

Then the female assumed the above position, which turned out to be part of their mating ritual. (The private moment has been censored.)

I am linking yo World Bird Wednesday.
Posted by EG CameraGirl at 8:27 AM

The second one is wonderful!
Grettings

I love the females "hair-do".

They're quite interesting looking ducks. I love the red beak. Everyone needs some private moments now and then, even waterfowl! :)

i saw this same mating thing with two black swans, it was amazing. and this is the first time ever that I can say I think the female is the prettiest. she is just beautiful with her hair do

Bird behaviour is interesting to observe censored or not. :)

I think the female merganser with her wild hairdo is so striking!

Yup, the female definitely has a bad hair day, but that didn't dim the allure she obvious had.

My goodness! It certainly easy to determine which one is male and which is female with this lovely pair. You made me giggle about the censorship!

We have lots of them around right now, all doing the same thing! :)

Those are lovely specimens to look at, fabulous shots!

Love this series of red beaks and then, oh dear, a bit of censorship? !

Beyond the Dog Dish said...

The female has quite the hairdo. Great photos.

I like the story line. Talking about being censored, I actually took a photo of sea gulls doing it, hahaha!

Great shots of your beautiful birds!

Love the red head, she is quite stylish and both of them use a daring shade of lipstick :-)

Great shots! I have always loved seeing the "do" on the female. They are both pretty. Thanks for sharing.

I love the lady's hairdo, in fact it looks a bit like mine!

Gorgeous ducks! You were in the right place at the right time.

Great photos. Those birds are beautiful and colorful.

The female is such an interesting looking duck. Glad you censored the mating scene. What you shared with us was beautiful. You left the rest up to our imagination. genie

I love the females hairdo. Kind of reminds me of times when I've said I have a hair-don't as opposed to a hairdo.

The female's hairdo looks like me at the end of this day!!!

Great capture, appartently she approved of the accomodations.

Wow! You got them neat and clean.

such a beautiful series of duck photos!

I am still smiling at your censorship...love the hair-do on the female. Just shows that love conquers all!

All great shots. Thanks for rendering out the 'private' moments. LOL MB