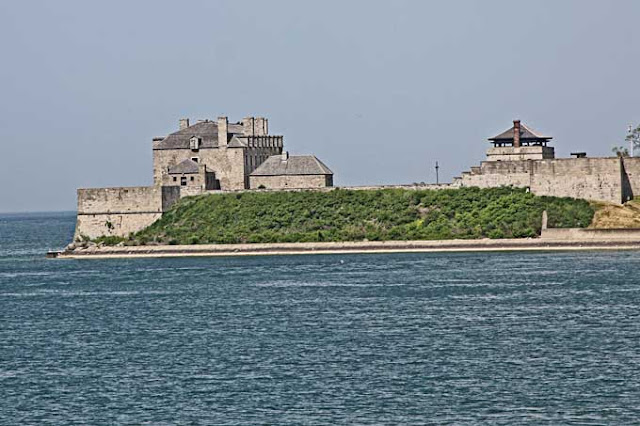 Fort Niagara, Youngstown, New York, seen from across the river in Canada

Last week on our way back home from a visit with family in Upstate New York, my husband and I took a mini-tour along the Niagara River, part of the border between Canada and the United States.

A bit of history: the years 1812 to 1815 was a period of conflict between the British Empire and the United States - the LAST war between them. For the next three years (2012 to 2015) Ontario is celebrating two centuries of peace with our neighboors to the south. 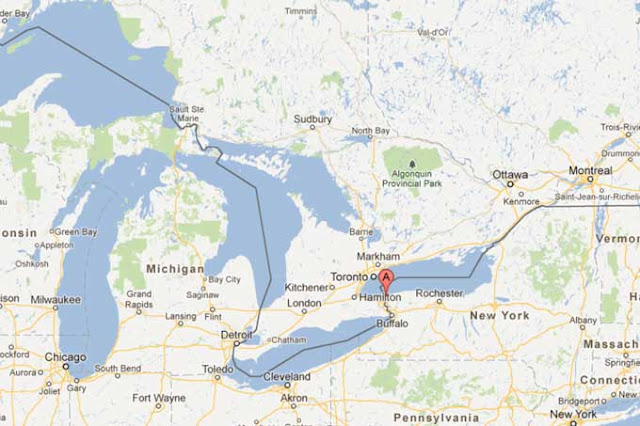 Fort Niagara in relation to the Canada/U.S. boundary on the Great Lakes 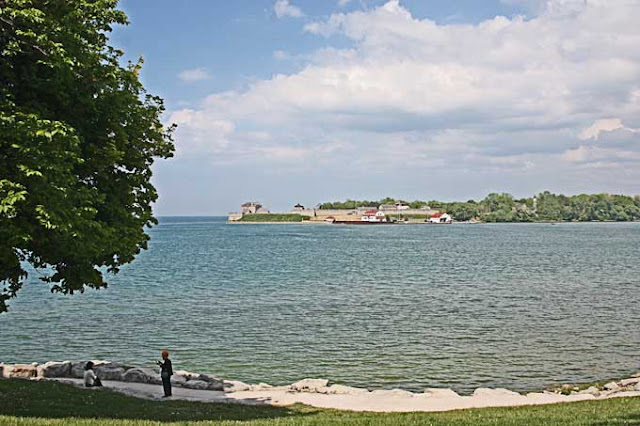 Today the fort is open to tourists and a year and-a-half ago I was one of them, which I posted about HERE and HERE. 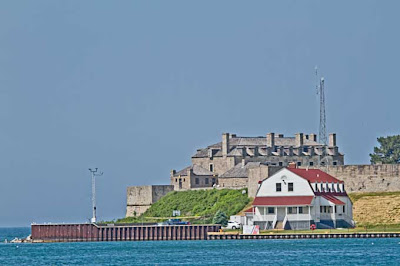 Now the U.S. Coast Guard is the only military presence.

Click  HERE to see tons more photos about Our World.
Posted by EG CameraGirl at 5:23 AM

thanks for the map, that shows a lot i did not know. i like that last photo with the red roof in it. i visited Niagra falls when i was 8 manymoons ago

Fort Niagara is a very impressive sight to view from the Canadian. This year is also the 200th anniversary of the War of 1812. Many historical reenactments are planned. So keep your camera handy.

How interesting! This fort is looking well, people are caring here.I like to read french names on the map! :o)

Very cool I love history. B

Looks like a beautiful day for a drive along the river. Interesting history.

I love the white house with the red roof
beautiful scenes

Interesting fort, thanks for including the map and history lesson.

Very interesting, well I think the USA had be celebrating 200 years of peace also!

Never seen it from this side. Thanks.

interesting history and photos.
thanks for sharing both.

thanks for the map also.

wish you a great week ahead!

Such a wonderful landscape!
Have a nice week:)

Loved hearing the history and seeing the map. I visited Niagara Falls last October, but did not get to see the fort.

I've never been to the American side of the Falls - maybe something I should put on my list!

It's a lovely area as are your images. We have visited there several times. Very, very nice.

I've never been over to see it!

I have become quite immersed in War of 1812 events... and with each event I usually learn some little snippet that is new.

Fantastic piece of history, captured perfectly in your images,

Marvelous captures for the day as always and I love the history as well. I've never been to that particular area, but I would love to visit there. Your photos are the next best thing! Hope you have a great week!

Loved the history. We haven't had a chance to visit this area -- hope to.

Gorgeous landscape! Have a great day.

I once took a boat tour through some of these waters (starting point was Gananoque). It was a gift for my mom and we both enjoyed it a lot.

Cool shots of the Fort, it would be nice to take the tour and learn the history. Great shots, have a wonderful week!

The fort certainly looks secure and like a protective shell … thank goodness we all get along now.

This is an interesting bit of history. The War of 1812 was an odd one. You could ask a dozen well educated Americans what that war was about and I doubt you would get two nearly accurate answers. In all honesty, I would be among the ten with a confused stare.

I enjoyed your pictures -- they brought back many memories. In 2002 we visited Fort George(?) on the Canadian side of the river and saw Fort Niagara much as you showed it. We finally were able to visit Fort Niagara itself four years ago.

Wow, I love these photos! I would love to visit there!

I stood where you were a few years back. My aunt lives nearby. Really nice shots!

It's so picturesque! What a lovely tour.

I have dearly wanted to swing by this part of the world for a long time. Sigh, thanks for the virtual tour!

I was in Hamilton once but ddid not se much of it as we sere rope skipping the whole trip. :)

forgot, mine is on the travel blog today

I can't put my finger on it, but there is an "aged" quality in your photographs that I really like. The hues are somehow muted, and feel as though they could have been shot long ago. That seems to bring the sense of history alive. I am so appreciative that two major countries have achieved two centuries of peace. Now, if we could patent that formula for the world's benefit.

Great post! We are taking our grandie to Niagara Falls this summer.

What lovely captures of a piece of history I have not seen. I find it interesting it went back and forth two times. I am glad that bit of fighting is long behind us. Wish all the rest would subside. Wouldn’t it be nice to live in a words which was at peace. genie