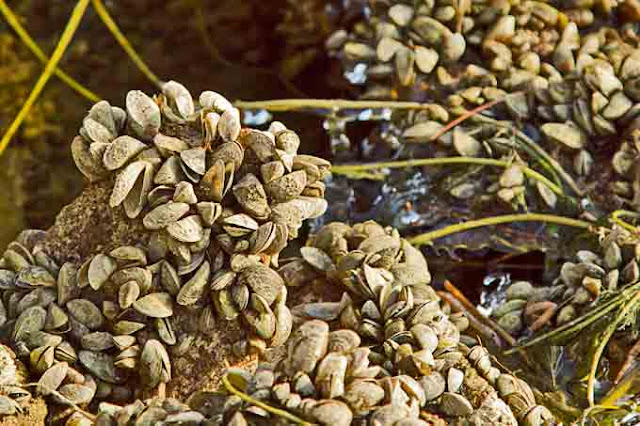 Zebra mussels under a bridge on Trent-Severn Waterway

ZEBRA mussels - fresh water mollusks - are invading the five Great Lakes and waterways in between. It's thought that more than two decades ago, zebra mussels hitch-hiked their way to the Lake St. Clair in the ballast of ships.

Because zebra mussels have no natural enemies in the Great Lakes area, they spread and have become a problem. Apparently the mussels filter algae from the water, removing food that larval fish and other invertebrates - now in decline - would have eaten. 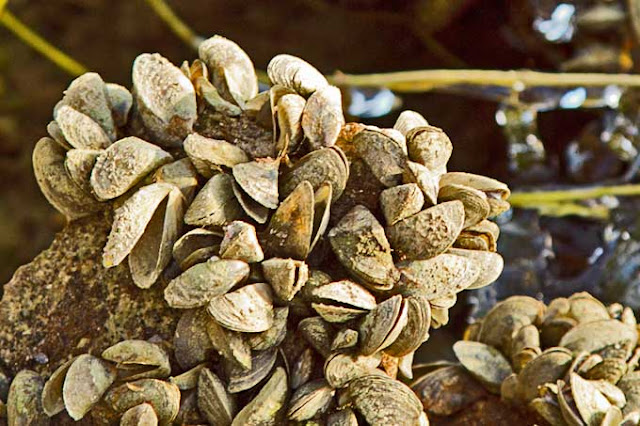 On the other hand, many native birds, fish and other animals eat zebra mussels. Some duck populations have changed their migratory routes to take advantage of these tasty morsels.  And fish such as small-mouthed bass, perch, sunfish and lake sturgeon have increased in some areas heavily invaded by zebra mussels.

FYI: I took these photos when the water was low so they had been out of the water for a while.

Posted by EG CameraGirl at 6:03 AM

Nice photos Camera Girl. Last fall I was at my nephew's cottage near Havelock, Ont. The river and lake beds are full of these creatures.

we have many invasive things here in Florida also. these do make for a beautiful photo though. glad they have some good for food.

They are troublesome but these photos are terrific.

Zebra mussels have been in Arizona for a number of years now and if they are not controlled they will eventually clog the canal system which drains water from the Colorado river and provides hydroelectric power to most of the Western states!

Nice pic, I've read about them and the trouble they cause.

Too bad they disturb the natural way of things there - but a great "Z" entry.

I've watched a couple of TV shows on the destructive mussels in the Great Lakes. So sad those little creatures can do so much damage.
The photos are awesome as usual!

we're starting to get them in lakes near dallas now, too. yikes!

Fascinating. It's a good thing that there is another animal to eat them or they would take over the world.

Fascinating looking critters! I am glad too that other critters can eat them or else it's not a good thing!

Ships aren't allowed to sump ballast water anymore - another case of changing the rules a wee bit too late.

Zebra mussels are bad, bad, bad! They clog industrial piping. If the Asian carp gets to the Great Lakes, the problems they cause might eclipse even these nasty zebra mussels.

Publicity ;o) Every Friday (and the Weekend), The Challenge "Walk In The Street Photography"

So many details!
Bravo!
Greetings

Great shots, the open ones look like they are laughing!

That is a terrible thing. People should start eating them as well. I understand that if the water they grow in is non-toxic, they can be pretty tasty if prepared correctly.

If they are edible, eating them might be a solution...

How beautiful these photos are, from textures to tones, the eye views a textural feast.

We have lots of mussels but I never heard of zebra mussels. Learned something today here. Great find.

Love your photos!! ARE they edible? Has anyone tried them?

Isn't it mind boggling to see how the ecosystem can be unbalanced by the introduction of a species that is not meant to be there? What an informative Z post. Thank you for sharing.

It's amazing how something so simple as a zebra mussel can change the entire ecosystem.

That's a great Z choice, very unusual. they don't look that tasty to me, but obviously a lot of creatures enjoy them.

Nice shots! I love mussels, so are these edible?

Nice pictures, I have heard of them but never seen them until now.

Interesting information. I haven't seen them around here, and hope not to. Nice photos, though.

Oh my- those are some troublesome little beasts aren't they? Great captures though.

Good shoot! Like one of your readers said, maybe people need to eat them, too. That's one way to help reduce their population.

PS: I am now your newest follower! ;) ~Cathy

Just had some mussels as part of a meal, but I think they're tastier for humans than these. Anything that threatens the Great Lakes is definitely a worry.

They look so lovely here, but yes we too are warned about them at every boat landing...and we must be sure to stop their growth!

Hopefully, the balance of nature will continue to right itself as natural predators change their courses and make adjustments.

Hopefully, the balance of nature will continue to right itself as natural predators change their courses and make adjustments.

Such an education! Nice blog♫♪

That was interesting. Way to go on a unique take on Z.

so are the shells striped (thus zebra?. here's to finding a solution for protection.

great photos!
You do give another perspective on an invasive species. Somebody IS eating them afterall, even though the patterns of other species is changing.

I L O V E informative posts! This Z is exceptionally interesting. Thank you for sharing and for the beautiful photos. Come visit soon and have a great weekend!

Visiting from Mrs Matlock’s, many thanks for stopping by.

Have a great weekend too!

I've read about these mussels before but I've never seen a picture of them.

It's sad when something invades native areas...this post made me think of the kudzu vines in the south.

Thanks for a thought provoking and interesting link for the letter 'Z'.

I've really enjoyed visiting you this round!

Great photos! And I enjoyed learning about the mussels and how birds have changed their route for them.

I have heard about these...