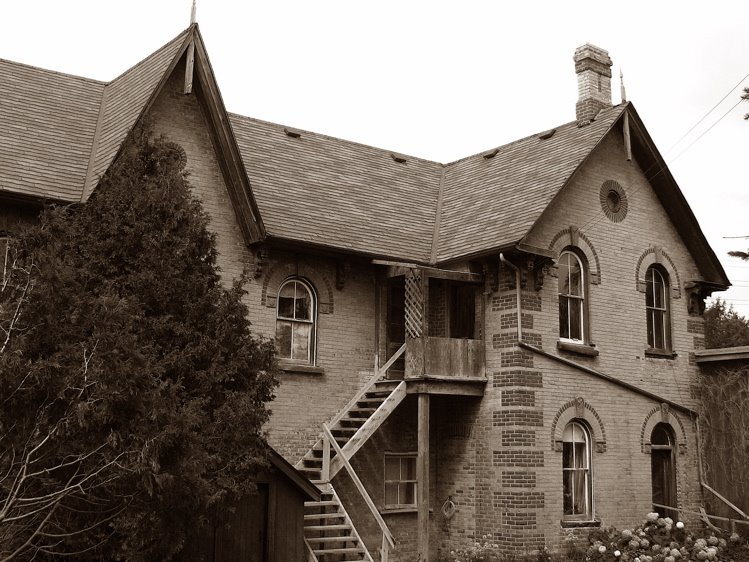 I confess that this isn't really an old photo but it IS an old building situated on a tree farm south of East Gwillimbury. The architecture suggests the building was built more than a century ago, perhaps during the 1880s or 90s. 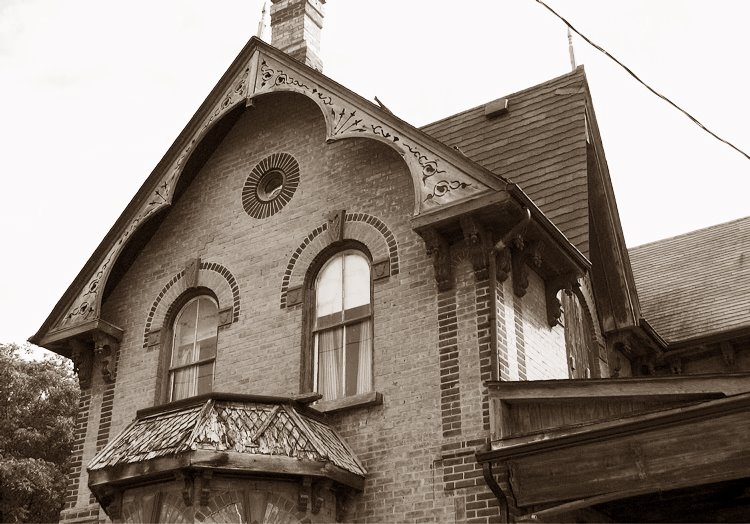 It's now the headquarters of a tree plantation that has been in operation since the 1960s. On December 1st, customers drive north from Toronto to cut their own trees, drink hot chocolate and roast marshmallows.

Unfortunately, the building is beginning to show its age, although the main roof looks to be in good repair, which is a very good thing. The sepia tones make the building look like it's in better shape than it actually is. ;-) 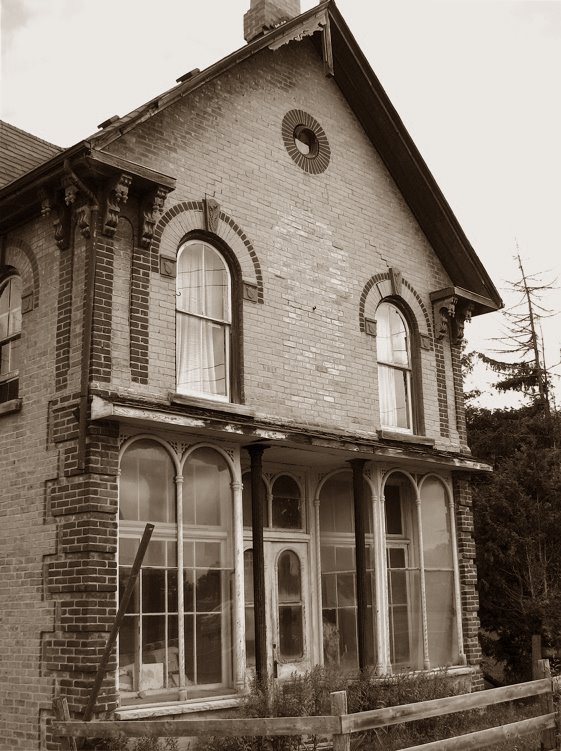 The west side of the building, which faces a north-south highway, needs work. And here you can see the display windows on the first floor that indicate this was originally a store. The windows are now packed with boxes and stuff, making the building from this angle look neglected from the road. 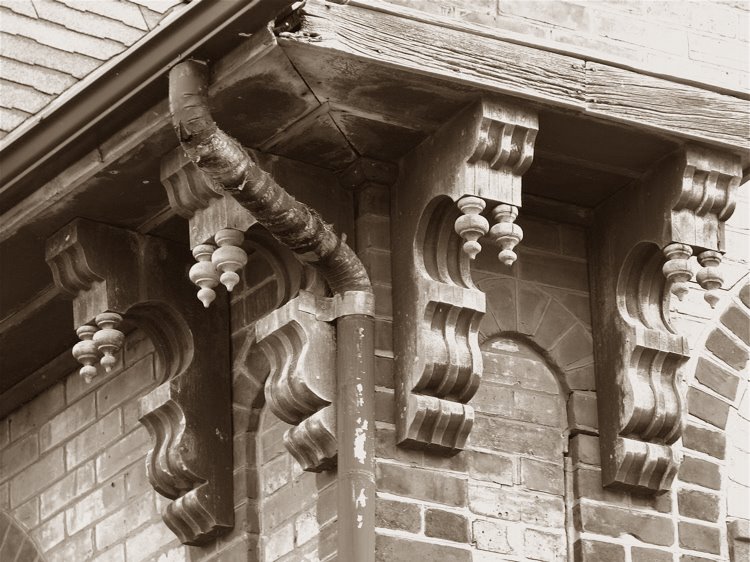 A few decorative details on the building show that this building must have been a beauty in its day. Notice these decorations under the roof at every corner.

Many thanks to MaryT, the Teach, at http://sepiascenes.blogspot.com for hosting this meme.
Posted by EG CameraGirl at 5:22 PM

its good to know about it? where did you get that information?

its good to know about it? where did you get that information?

What a lovely lady she is. A bit worn for sure but I hope the current tenents will shower her with TLC soon.

me ann my camera said...

This building is a real work of art I think. How beautiful it must have been in its beginnings. Lovely in sepia. I think we will see a lot of beautiful things on this meme.

An excellent set of photos. The sepia effect really works well with this subject.

What a very cool old building. I really like it in Sepia..

The sepia effect is wonderful for these shots. This building must have been absolutely lovely at one time, and still has good bones. Let's hope the current owners are willing to invest a bit to restore it; it would be a real shame to let it deteriorate further.

All those are stunning shots! Those buildings are just a work of art!~

Thanks for that bit of history on this marvelous building. I can never figure out why these old structures aren't preseved. Newer ones are never built with this beauty. Looks great in sepia.

These buildings are looking pretty good in sepia tone and it adds on to the vintage feel of them as well :)

What a gorgeous grand old dame. All the gingerbread that went into houses years ago--I think is wonderful. It gives them a personality--not like some today. Thanks for sharing. MB

Sepia photo's may be my all time favorites. The building and the detail is so interesting. I suppose it would take a fortune to completely restore it. I wonder if they could even find the craftsmen do do those details.

What a fascinating building, and I really like that you've shared some of its history with us as well.

It certainly could be an old photo. Love the sepia tones. BJ

The building looks fantastic in sepia tones!! (which isn't an excuse for the responsible ones to avoid repair expenses!)

EG, a gorgeous building with lovely decorative detail! Thanks for such a close look at all angles! Your photos are beautiful! Thanks for joining us! :)

What a lovely post youy made from this beautiful building!! I think this sepia meme is going to be so much fun!!

What a lovely post youy made from this beautiful building!! I think this sepia meme is going to be so much fun!!

fantastic shots of a lovely building!

What a wonderful old building. How I'd love to give it the TLC it so deserves. It looks great in sepia!

Not a mad fan of sepia but the style suits this subject perfectly.