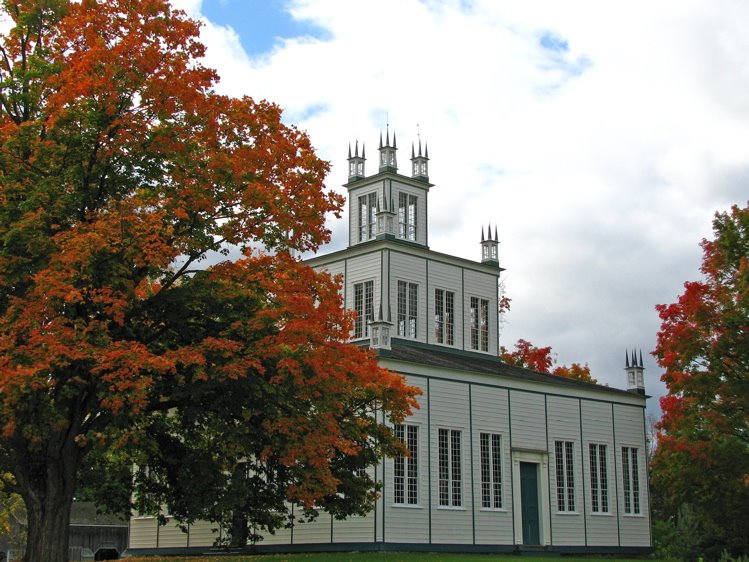 This building is among the most important ones in East Gwillimbury, the centre of my everyday world.

Between 1825 and 1831 using simple tools with skillful artistry, a small sect of former Quakers calling themselves the Children of Peace crafted the Sharon Temple. But this in not - and never was - a church. Instead the building was used once a month to collect money and goods for the poor. 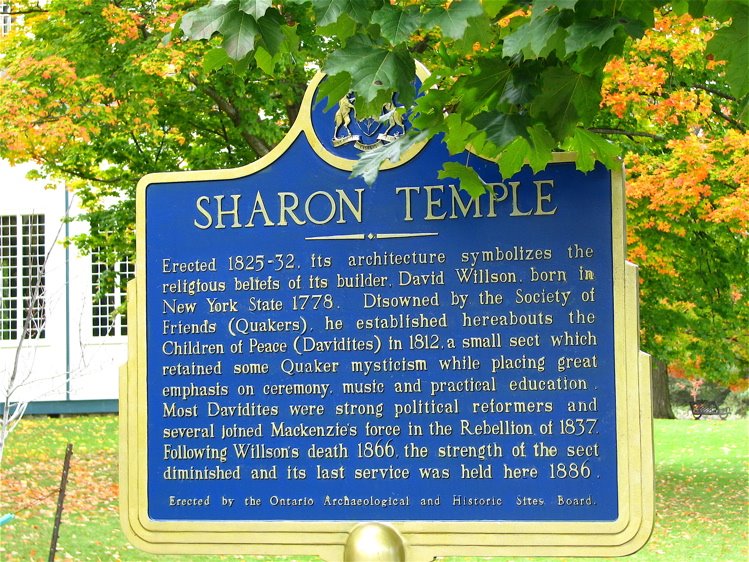 After the sect’s charismatic leader, David Willson, died in 1866, the group slowly diminished, holding its last meeting in the temple in 1889. The building fell into disrepair and was nearly torn down. But in 1917, the York Pioneer and Historical Society purchased and restored it. The temple, which celebrated its 175 anniversary in 2007, is now part of a Canadian national historic site and museum. It’s also a National Peace Site and an Ontario Archeological and Historic Site. 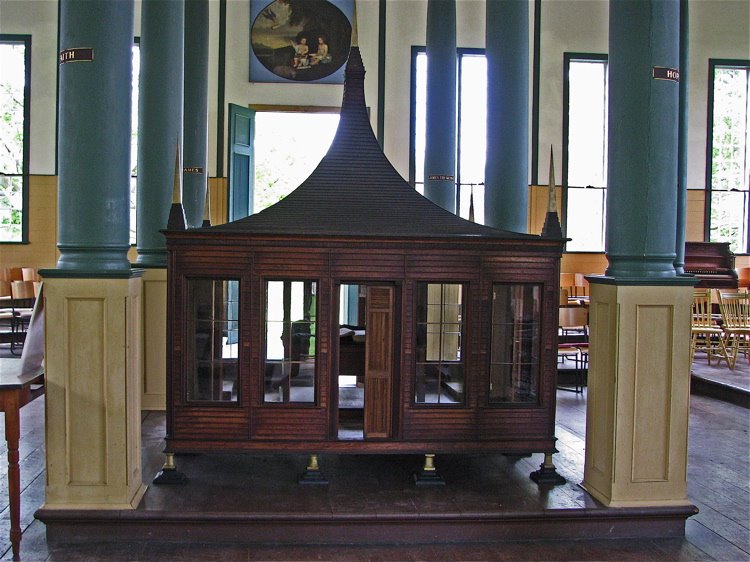 Inside the temple at its centre are six pillars, four of which are named Faith, Hope, Love and Charity. And inside the pillars resides an ark that contains a secret compartment not discovered in modern times until 1990. It contained hundred pages of community records. 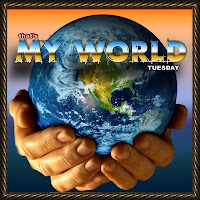 To learn about what's happening in other blogger's worlds around the globe, visit http://showyourworld.blogspot.com/
Posted by EG CameraGirl at 1:06 PM

I'm so glad I stumbled upon your blog. Lovely photographs & a real window into East Gwillimbury - an area I knew nothing about. Thank you!

That's very unique and I enjoyed reading the history!

This Is My Blog - fishing guy said...

EG: What a wonderful and insightful post. I am so glad you shared this information. I can see the beauty of the building even more with your explanation.

What an amazing building. Someone loves it very much--it is maintained so beautifully.

This is a magnificent building! Thank you for showing and guiding us in the building. Your photos are also very good.
Thanks for your visit.

And the acoustics are excellent! I played there once.
Robyn

That's way cool! Any interesting revelations in the community records?
A Wonderful post! Thanks!
Cheers, Klaus

Wonderful post and beautiful photo's!!
Take care and thanks so much for commenting on my blog!!

What a fascinating place, I loved visiting! Your photographs are beautiful. Thank you for sharing!

Oh this is a wonderful post! I love the story of the old Quaker temple. And it is good to hear that it was restored and serves as a place of peace now.
What a great story! Thank you for sharing, and also for coming to my blog, would be nice if you would come to Vienna once!

What a stunning place. So glad that people had the foresight to keep something like this alive. We need to keep places like this for future generations. Thank you for posting, I've learned something new today which is a bonus.

Very interesting and great pictures. Thanks for sharing.

Dang girl, you are a Tour Guide WOW! Wonderful post and I love the infomation.

Wow EG, this was a very interesting post! I really enjoyed it...would love to see this place in person.

I never realized that Quakers had settled in Canada as well. What a beautiful building inside and out and love the background. Thanks for sharing.

Thats fantastic! No, I have to say amazing! I enjoyed reading the history;)

And yes I'm ready for Haloween;)

What a fascinating building and history. How great that it would become a National Peace Site after it was no longer having meetings once the original group diminished. Beautiful photographs of a beautiful and meaningful building.

that is really cool - thanks for sharing it. I'd heard of the davidites, but didn't know about this temple or the secret compartment

I enjoyed your post on the Sharon Temple and its fascinating history. It's really a beautiful building.

This is a great post and very interesting.
Terrific choice of photos and great information.

Great photos. I love the first one, kind of framed with the autumn leaves. And thanks for the history lesson. Very interesting!

That is a lovely and obviously lovingly restored building, thank you for the tour and history lesson. How are you personally involved with it?

Great MW post, very interesting and what a fascinating building

Thank you for the wonderful tour. This 2nd week of meme really makes us appreciate the many places that we don't usually see or ever had a chance to visit like the one you showed me in this post. Hope you get to have time to check my world too. Another great job and more to come in the coming weeks.

A Blog In The Rough said...

very neat photos, the sharon temple almost looks fake it's so precise looking! Thanks for sharing the pix and the history lesson was great too.

Nice photo and information. I posted on temple too. Have a nice day.

What an interesting and unique building. Great history. Did I miss any mention of it's use today? MB

Fascinating stuff. I'm so glad that Sharon Temple was preserved. I enjoyed reading about it and seeing the photos.

What an incredible place to wander aqnd feel the history and archtectural atmosphere! Fantastic shots!

MB,
Today the Sharon Temple is part of a museum of early life in East Gwillimbury. And because the building's acoustics are outstanding, concerts are often held inside on summer weekends.

Its a pretty world you have dear and thanks for sharing this...TC

Thank you for an interesting post on the Sharon Temple, and its lovely photographs.

Thank you for sharing this historical building. It's beautiful building.

EG, an incredible and insiring building. Thank you for the story of Sharon Temple! :)

A very interesting post!
The temple is very simple yet elegent.
The ark inside also looks like a wonderful piece of architecture - and a hidden compartment - fascinating!

THanks for the input on this interesting architecture!

Thank you for this interesting post and wonderful photos.
Tnak you also for your comment on my page!

Thanks for leaving me a note. Now I have been looking at your daily blog for quit some time. You take amazing pics. Super!

What a wonderful post and started with such a good purpose.

what a gorgeous building, and such an interesting post. thanks for sharing. :)

Marvelous post in every way. It's wonderful to see an historic building saved and restored. Thanks for sharing this very interesting information.

Beautiful pictures!
Visit my blog to see my post about our national celebration.

Being a fellow Canadian, I always check out the canadaian sites first!
Thanks for this wonderful post. I learned so much from coming here today.
What a good ob that it was preserved and those hidden records were found. It is such a sad thing in North American society how we just tear down the old and rebuild. Thus losing what short heritage we have. Unlike europe where they maintain so much of their hisory by the preservation of ancient architecture.

Looks like a fascinating place! I love the architecture -- and the story behind it.