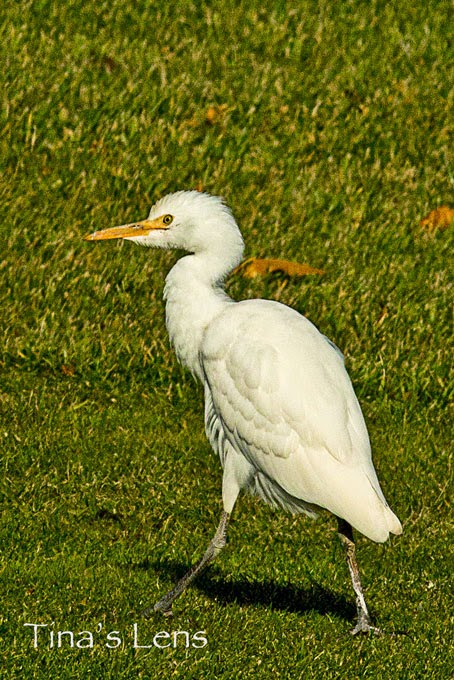 This gregarious egret was not hanging out with other egrets or with cattle. It's best friends (the day I took this photo) were Canada geese.  Cattle egrets are smaller than other egrets, so except for it's bright white colour this one fit in with the geese pretty well. 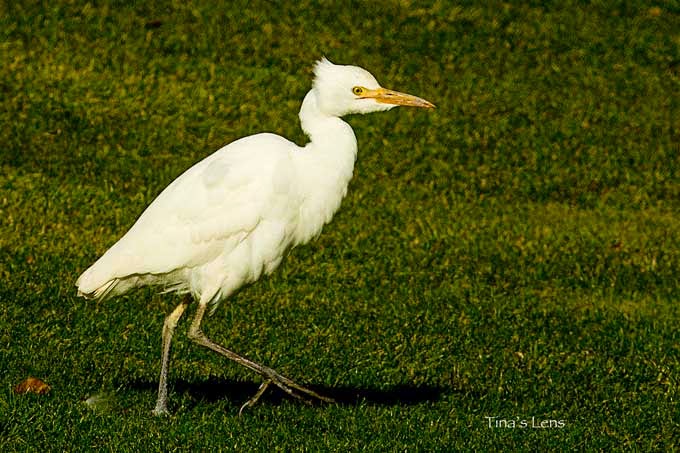 Uncommon here, the cattle egret was seen on a golf course near one of my favourite conservation areas so we popped in to see it. The egret was allowed out on the golf course and people with cameras were not, so I've cropped these photos a LOT. 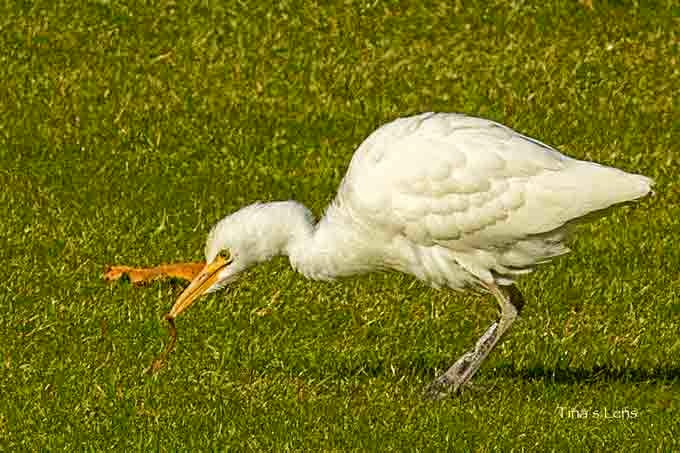 The golf course was a smorgasbord of delightful egret treats even in November. The photo is a tad out-of-focus, but I wanted you to see it pulling out a snack. 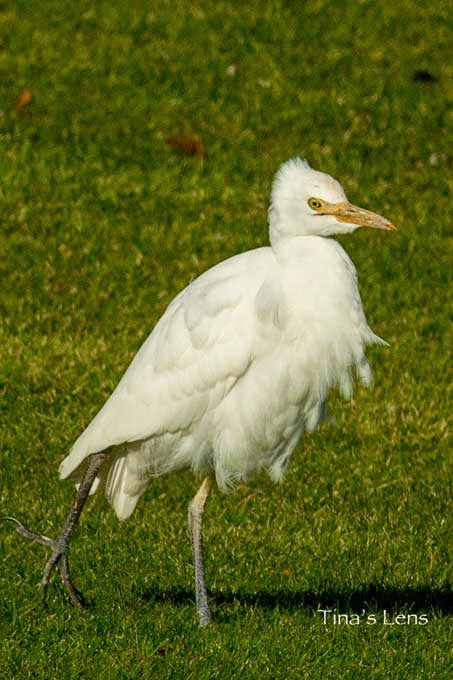 It seemed to sense it was the only cattle egret in town, but on Monday I read in an email that another egret was seen on the golf course...so now there are two.

It was definitely strutting it's stuff for you! Great photos!

Nice shots. You must have been surprised by what you were seeing.

Egret must have paid his green fees. :-)

Great photos! I remember seeing these cattle egrets on holiday a few years back.

Sweet that there are now two, Tina!!! A super job cropping. Usually when I do that my subject gets distorted...:)JP

Such a lovely surprise to have found this bird on the golf club.

Laughed that the egret was allowed on the golf course but people with camera's were not. Maybe you should have picked up a golf club and said you were just playing a few holes.

Wonderful profile photos of these birds.

he is a cutie and soon there might be THREE or more on the golf course.. or is that in the spring only?

I could spend all day following them around snapping photos of them at play, if only one would let me! Now the Blue Heron on the other hand, has, when I was out with the fishermen of the family!

Isn't he handsome. There are quite few of those guys around here. Always fun to see.

Nice juicy worm he found there EG.. no wonder the golf course is so healthy and green :) thank goodness for the long lens hey :)

Lucky you! And terrific photos you captured too!!

What a beautiful bird!

i love these goofy birds! so quirky and cute! great shots!!

Beautiful bird indeed and terrific captures as always!! Hope your week is off to a great start! Enjoy!!

GREAT photos of the egret!

You captured great shots of this one.

What an awesome treat! I love these birds. They can be rare for us as well depending on the time of year. Congrats! That bird is also a bit photo shy as well....so well done!

You must either have a very fast long lens or a super-steady hand! Terrific photos. Cattle egrets are ubiquitous in these parts and always fun to watch!

Superb image of the Cattle Egret you have taken.

He has his eye on you. Great shots!

Great shots! Not something I usually see!

wonderful captures of a familiar feather!

Gee, I sneak my camera onto my golf course from time to time.

It's always nice to see an Egret and especially the Cattle Egret.

Great photos of this lovely bird.

Truly such a beautiful creature!

I'm surprised they were still visiting you this late. I think ours here in East Texas were already gone by this date.